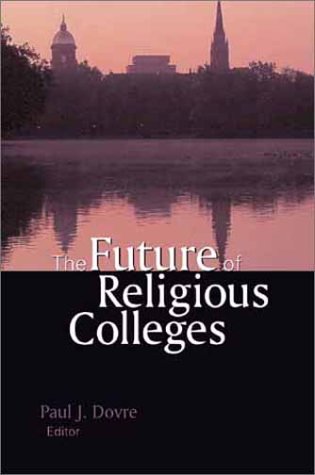 THE FUTURE OF RELIGIOUS COLLEGES

This volume provides the papers and some notes of the discussion at a conference held at Hervard in October 2000. Most of the contributors apart from George Marsden and Mark Noll will be unknown to readers in Britain. By ‘religious colleges’ most participants meant ‘Christian colleges’ in spite of passing references to Jewish and Mormon colleges, and these colleges are liberal arts colleges or universities, not seminaries for the training of ministers. There is a paper on academic freedom and its constraints contributed by two Mormon scholars.

On the first theme Sloan criticises mainstream Protestants for accepting the modernist separation of faith and knowledge. He proposes a participatory way of thinking involving the whole person and leading to qualitative ways of knowing that bring faith and knowledge together. Marsden also argues that we are moving beyond scientific humanism to the recognition of faith-informed scholarship and he illustrates this form his own work.

Noll points out that the future of religious influence in the colleges is in danger but he suggests ways forward to steer between the extremes of sectarian withdrawal and capitulation to secularisation. At the same time he indicates that evidence form mainline academic publishers and the appointments of Christians to teaching posts in top universities suggest that Christian scholarship is flourishing.

Some of the papers and themes overlap, so for example, the Catholic contributions are influenced by the papal document of 1990, Ex Corde Ecclesiae. This a papal pronouncement on Catholic higher education which put in place measures to ensure that Catholic institutions continue to be Catholic in an atmosphere of academic freedom, but do not fall foul of human rights legislation or the separation of church and state. O’Connell is confident that the Catholic identity and mission of their colleges will flourish. Hellwig sees tensions between the colleges and the hierarchy. Beaty shows that similar tensions between Baptist colleges and conventions have led to the separation of some colleges from denominational control but this has renewed rather than diluted the colleges’ Christian mission and Baptist identity.

The six essays on different educational visions seem to be something like advertisements for their respective institutions. So Roche writes about the intellectual appeal of Catholicism for integrating faith, learning and living. Carpenter notes the advantages Reformed institutions have over other evangelical institutions in the confrontation with secularisation despite his title, ‘The Perils of Prosperity’, itself a commendation of a kind. One interesting feature of his paper is his testimony to the value of Kuyper’s philosophy despite the virtual elimination of that influence in Holland itself.

The whole relationship between church and state raises interesting questions about the law and differences between the different American states. Colleges have been able to get financial support for students and for those courses that are regarded as purely educational. This could be threatened if the church authorities impose too many religious constraints on the curriculum but most thought that the present climate was favourable to distinctively religious colleges.

It is a matter for thanks to God that so much education of these Christian kinds still flourishes despite securalisation and postmodernism, and that so many dedicated Christian teachers in higher education operate at the thoughtful level indicated in these papers. We should all pray that it may long continue.