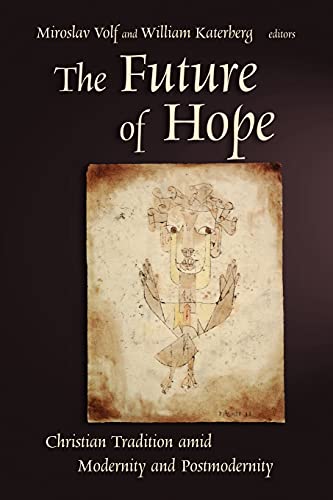 THE FUTURE OF HOPE—CHRISTIAN TRADITION AMID MODERNITY AND POSTMODERNITY

Jurgen Moltmann’s opening paper provides a good summary of the context addressed by this collection of essays from the Seminars in Christian Scholarship Programme at Calvin College, USA. Moltmann shows how biblical and extra-biblical apocalyptic visions were secularized in the Enlightenment. Whereas traditional cultures look back to the past, the Enlightenment’s secularized eschatology fed the growth of modernity by orienting it towards the future.

But now we view the Enlightenment project with suspicion because of its role in Third World poverty, environmental destruction, two world wars and the various holocausts of the twentieth century. Modernity’s vision of human progress now lacks credibility. As a result postmodernism is sceptical about visions for the future and of eschatology in all its variations. The question addressed by these essays, then, is what place has eschatology in a postmodern world? What is ‘the future of hope’?

Behind this question, however, lies another more implicit question. If there is no hope, what is the future of social reform? Using an analogy employed by one of the essayists, suppose we are trying to resuscitate a person. We may not be optimistic about their chances, but while there is the possibility of survival we will do what we can. It is when we think there is no hope that we finally give up. If we have no hope for history, we give up trying to reform society. What the essayists are ultimately after is ‘a hope that can sustain and enrich political action’ (David Billings).

The response offered by most essays seems to be to affirm a modified hope for history; a less ambitious hope or a ‘weak Messianic power’. The problem is that throughout the collection there is remarkably little sustained reference either to the Bible or even to Jesus the Messiah.

Perhaps as a consequence there is surprisingly little eschatology. The focus is more often on hope within history—hope for history that does not (yet?) involve the end of history and the parousia of Christ. William Katerberg, for example, asks: ‘What redemption can utopian and progressive movements of the modern age extend to the past? Don’t all emancipation projects beg the question: What about the dead?’ A good question to ask. Katerberg’s answer, however, seems to be a modified historiography rather than personal resurrection. The result is, by Katerberg’s own admission, ‘frustratingly vague’!

The hope for change within history is a perfectly legitimate object of reflection for Christian theology. But this is very different from the hope of the NT. NT hope does not disappoint; hope within history often does. As David Billings concedes: ‘the future may be different because of the implicit promise of “the new” in each new birth: this difference may, however, be evil.’

Only James K. A. Smith and Kevin Hughes strike a different note. Smith argues for eschatology grounded in transcendence rather than ‘an “immanentized” eschatology which finds the resolution of injustice within the mechanisms of history itself.’ He argues that the failure of modernist hopes creates an open space for Christian ‘to unapologetically proclaim a hope that does not disappoint.’ Hughes applies the approach of apophatic theology (theological truth expressed in negative and paradoxical forms) to eschatology. He highlights the way Paul uses negatives (‘what no eye has seen’) and contradictions (‘the mortal puts on immortality’) to speak of the future. This leads him via Bonaventura and Julian of Norwich to assert that all hope must be ‘crossed’. We gaze toward the future through the cross. This prevents us stating too much (claiming too much in history) and too little (despair). This is all very suggestive, but remains in the article too vague to be of use.

There is much of interest in these essays on the current status of hope in the contemporary world, but disappointingly little to help us restate a biblical eschatological vision.