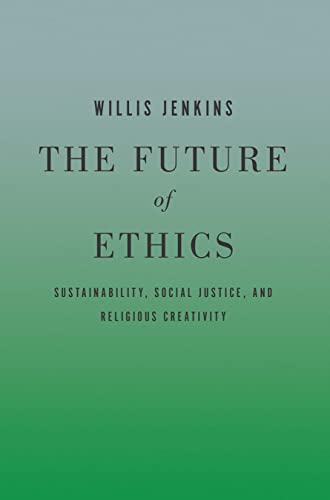 The Future of Ethics: Sustainability, Social Justice, and Religious Creativity

Willis Jenkins is the Margaret A. Farley Assistant Professor of Social Ethics at Yale Divinity School. His recent book, The Future of Ethics, follows the trajectory of his significant volume on eco-justice, Ecologies of Grace: Environmental Ethics and Christian Theology (Oxford University Press, 2008). The central argument of The Future of Ethics is that with problems of size and complexity, ethical theories must be shaped in response to necessary actions rather than shaping actions based on a foundational worldview (pp. 4–7).

The book is divided into seven chapters, along with an introduction and afterword. In the introduction, Jenkins helpfully lays out his methodology for the book. He admits that his “approach is pluralist and nonfoundationalist in that it does not suppose that the world needs to share a common faith or worldview in order to cooperate in confronting shared problems” (p. 6). More important for Jenkins is the development of “practical capacities and responsibility and cooperation” (p. 6). Jenkins declares that worldview matters only “in the ways that particular communities use them to support possibilities of response” (p. 6).

After establishing his ethical scheme and explaining the scope of the project in the introduction, chapter 1 outlines the scope of the problem of climate change, which Jenkins believes to be greater than popular awareness. Chapter 2 is an extended argument for praxis preceding worldview in an ethical system, involving a critique of contemporary and historical Christian ethicists whose emphasis is on the primacy of right theology. The third chapter consists of Jenkins’s defense of global ethics based on shared activism above theological framework. Chapter 4 offers a critique of a purely pragmatic view of environmental ethics. Jenkins’s argument for the involvement of worldview in ethics is that it can be more effectively leveraged to mobilize action.

In the final three chapters of the volume Jenkins shifts to consider three specific environmental problems. His purpose in these chapters is to demonstrate how a pragmatic, pluralistic ethic can be effective in combatting particular social ills. In the fifth chapter, Jenkins discusses the social and environmental injustices wrought by the uneven distribution of harmful chemicals, particularly with respect to chemical disposal, among different ethnicities and economic groups. The sixth chapter connects Jenkins’s concepts of social justice and pragmatic ethics to the idea of relieving economic poverty. Chapter 7 argues for a focus on justice for future generations, not just the present generation. The afterword is a brief reflection on the limits of the system and the need to rely on sustaining grace, which is a reference to his earlier, foundational book.

The Future of Ethics is an innovative approach to ethics, particularly environmental ethics, from a Christian tradition. In a refreshing shift from the typical approach to Christian environmental ethics, Jenkins does not frame his work in response to Lynn White’s important but overused essay. Instead, Jenkins attempts to move the project of Christian environmental ethics beyond the consideration of the doctrine of creation, anthropology, and eschatology. This book is a call to respond by participating in meaningful activity to reduce human impact on the environment, particularly, as Jenkins understands it, to reduce the human contribution to climate change. In this way, Jenkins’s book is successful in accomplishing his purpose by moving the reader to consider the empirical evidences, as presented in the book, of human impact on the environment. The reader is also brought into consideration of the appropriate response to that evidence.

Although Jenkins argues his case well and successfully moves beyond the basic theological concerns, his rejection of a uniquely Christian worldview as a foundation for environmental ethics creates methodological concerns. Jenkins’s assertion that worldview is constructed based on observations of behavioral patterns needlessly detaches his ethics from a traditional, orthodox Christian foundation, which allows Jenkins to focus nearly entirely on social activism (p. 90). In truth, Jenkins’s argument is generically orthodox, with connection to Christianity made by beginning each chapter with a selected biblical text and occasional references to elements of the Christian tradition in the text itself. Yet while this de-emphasis on Christian theology is essential to Jenkins’s overall project, it tends to undermine his overall argument. This is because apart from Christian foundations, there is no longer an adequate basis for neighbor love, respect for God’s creation, or eschatological hope. Thus The Future of Ethics falls prey to the drift common among nonfoundational projects, making it an interesting read but more suited to reinforcing the views of individuals already in agreement on the centrality of the ecological problem from a pragmatic approach than convincing skeptics of the value of this approach.

Still, The Future of Ethics is helpful in cogently demonstrating a nonfoundational, pragmatic approach to ethics based on a contemporary understanding of scientific evidence. As such, Jenkins has made a significant contribution to the ongoing conversation in Christian environmental ethics and should be commended on that basis.