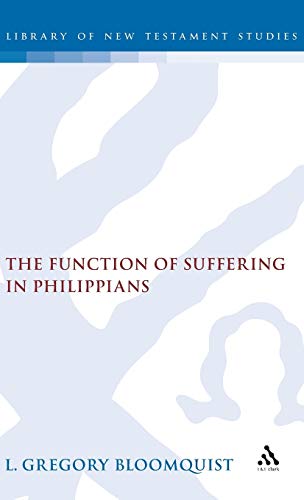 The Function of Suffering in Philippians (JSNTS 78)

In the ever-burgeoning field of Pauline studies it is becoming increasingly difficult to find a niche in the secondary literature. However, L. Gregory Bloomquist detected such a gap and has filled it in admirably. As the author points out in the introduction, it is remarkable that his is the only specialized study available on the subject of suffering in Philippians, a theme which permeates the entire epistle (p. 13). Oddly enough, the book was printed without a preface. However, by contacting the publisher, the reviewer was able to discover that The Function of Suffering in Philippians is a revised dissertation which was originally submitted to the Toronto School of Theology in 1989 for the PhD degree.

The monograph is divided into three parts. The first part, which contains three chapters, considers the history of interpretation of suffering in Philippians. In Chapter 1 the author discusses various martyrological approaches to suffering passages in Philippians. Chapter 2 reviews how modern interpreters who stand in the Christ-mysticism tradition interpret Pauline texts which speak of suffering. Albert Schweitzer and his so-called followers are also considered in this chapter. Finding himself dissatisfied with the martyrological, the Christ-mysticism, and the Schweitzerian approaches, in Chapter 3 the author surveys what he refers to as ‘alternative approaches’ (p. 50). After summarizing other history-of-religion views and considering various theological approaches, the author concludes that Daniel Patte’s work on structural semiotics is best able to explain the structure of Paul’s thought. Convinced that the study of NT texts is moving away from historical-critical and theological approaches (p. 65), Bloomquist asserts that ‘structural semiotics provides us with another alternative to approaches dominated by twentieth-century Western metaphysics of ontology’ (p. 69). One only wishes that the author would have defined the ‘buzz words’ that he employed from the field of structural semiotics and that he would have explained the theory more extensively. In doing so, he would have strengthened his position.

In Part Two of the work, the author moves from the structures of Paul’s thought to the structures of Paul’s letters. Chapter 4, entitled ‘Letter Writing and Rhetoric in Antiquity’, is a helpful review of how ancient letters were composed and how rhetorical appeals were framed. Bloomquist is rightly convinced that Paul’s epistles are best viewed as occasional letters intended to persuade (pp. 93–94). Having set forth the pertinent epistolary and rhetorical principles in Chapter 4, the author seeks to discover the epistolary structure of Philippians in Chapter 5 and the rhetorical functions of the letter in Chapter 6. At the outset of Chapter 5 Bloomquist considers various arguments for and against the integrity of Philippians. After a careful discussion, he correctly concludes that Philippians is of one piece. A summary of his epistolary analysis is found on p. 117. In Chapter 6 the author argues that Philippians is primarily an example of deliberative or persuasive rhetoric. Based on his rhetorical analysis, Bloomquist outlines Philippians as follows: epistolary prescript (1:1–2); exordium (1:3–11); narratio (1:12–14); partitio (1:15–18a); argumentatio (1:18b–4:7);peroratio (4:8–20); and epistolary postscript (4:21–23). We found the author’s understanding of ancient rhetorical devices to be especially illuminating when applied to Paul’s outbursts against his opponents. (Bloomquist believes Paul’s opponents in Philippi were ‘some kind of Jewish Christian pneumatics’, p. 131; see also pp. 198–201.)

In the final section, the author applies his epistolographical and rhetorical findings to the discussion of the function of suffering in Philippians. He attempts to detect the function of suffering in the epistle by a careful exegesis of the pertinent texts. In Chapter 7 he treats the theme of suffering in 1:1–18a. Chapter 8 contains the author’s comments on how suffering surfaces in 1:18b–2:18. Then in Chapters 9 and 10, Bloomquist deals with the theme in 2:19–4:7 and 4:8–20 respectively. This reviewer found particularly insightful the discussion of the term δουλος (‘servants’) in 1:1 (pp. 140–145), the comparison of the persecution of Pauline Christians in Philippi and Thessalonica (pp. 157–160), and the presentation of 2:6–11 against an Isaian suffering servant backdrop (pp. 160–168). Although there are few exegetical foibles in Part Three, the author’s apparent reversal of the traditional sequence of the Thessalonian letters is certainly suspect (p. 150).

It is not until the conclusion (pp. 191–197) that the author actually spells out what he perceives to be the functions of suffering in Philippians. He suggests that in epistolary and rhetorical terms the functions of suffering are as follows: (1) suffering serves as a captatio benevolentiae; (2) suffering provides an occasion for the communication between Paul and the Philippians; (3) suffering highlights Christ and his servants as types who are worthy of emulation; and (4) suffering points to vindication and gives Paul an occasion to express his ‘eschatological confession of faith in God’s grace manifested to his servants’ (p. 196). Given the multiple functions of suffering in Philippians, one wonders why the book’s title does not indicate such. Regardless of this apparent oversight, there are certainly many positive functions that Bloomquist’s work will serve in Pauline studies. It is a needed book in the field, and it is well-written and well-argued throughout.