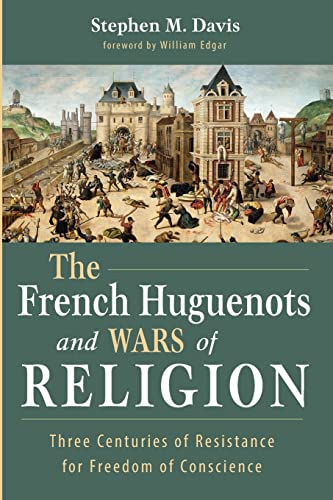 The French Huguenots and the Wars of Religion

It appears to this reviewer that Stephen Davis’s The French Huguenots is the first non-technical book on the Huguenots published in English since the release of Janet Glenn Gray’s The Huguenots: Anatomy of Courage in 1981. In intervening years, there have been more technical books, in English, about the Huguenot experience inside France and in exile by such writers as Robin D. Gwynne. But if we consider overviews of the Huguenots era, we can soon conclude that Davis’s volume fills a considerable need. Considering that the record of this movement inside France and beyond has been so memorable, it is a wonder that writers in English have had so little to say about them in recent times.

It is the first great strength of this book that, written by an American author who has lived and worked in France, it draws on a vast range of French twentieth-century literature bearing on Huguenot history. Without in any way detracting from the quality of his work, we can say that he has done a great service by introducing English-speaking readers to a range of important French authors—Bost, Joutard, Encrévé, to name but a few—who are able to describe developments in Huguenot history as writers standing within this ongoing French tradition.

A second great strength is that it demonstrates the complexity surrounding a storyline which—if known at all by English-speaking readers—is known only in the broadest outline. To give an example, while it may be popularly supposed that organized, large-scale repression of the French Protestant movement commenced in the final decades of the sixteenth century (leading eventually to the issuing of a beneficial edict granting limited toleration in 1595), Davis shows that eight distinguishable phases of armed conflict between Catholic persecutors and Protestant resisters were underway beginning in 1562. Again, while we popularly suppose that the Edict of Toleration promulgated by King Henry IV in 1595 represented an innovative breakthrough, Davis is able to show that this Edict of Nantes largely consolidated terms and benefits which had been granted in earlier phases of the conflict before truces were broken. Like earlier negotiated settlements, this Edict involved trade-offs for both Protestant and Catholic subjects. He goes on to show that the great vulnerability of this movement is that it came to depend for its protection on the will of the monarch, who, while claiming absolute power, could not prevent his successors from reversing his Huguenot accommodation.

A third great strength is his carrying forward the discussion of the underlying issues raised by the Huguenot experience of persecution and marginalization right up to the present day. After having achieved the liberties which had eluded them earlier in the time of the French Revolution and Napoleonic era and having seen at long last a desirable separation of church and state in France by 1905, Davis explains that the religious intolerance which plagued the Protestant movement is definitely on the rise in the France of today. This upsurge has been brought on by the disruptive efforts of revolutionary Islam. The understandable efforts of the modern French state to curb Islamic resistance to cultural assimilation and (by some) the promotion of sectarian violence is, like a dragnet, tending to limit the freedoms of conservative Protestants also. These have their own distinct reasons for resisting full assimilation into secular France.

At the same time, Davis’s book could be an even stronger book than it is. In providing a background for the Huguenot saga, Davis depends on writers of generations ago for his basic understanding of the Reformation era. Roland Bainton and G. R. Elton wrote their popular surveys of the Reformation era in 1952 and 1963, respectively. These authors are foundational to Davis’s approach to the Reformation era. What has happened over the last half-century or more (since these titans wrote) is that there has come an emphasis on local or regional Reformation movements. Accordingly, rather than France’s Reformation era being a manifestation of what began in Wittenberg in 1517, it is today seen as a movement in its own right. Christian humanists in France, such as Jacques Lefevre d’Etaples (d. 1536), are today seen as influencers of Luther. Not only Marguerite, the sister of the French king Francis I, but that king himself are now better understood as the promoters of the reform movement associated with Lefevre. Marguerite was steadfast in this support, while Francis only reversed himself beginning in 1534. Christian humanism focused on the Scriptures in both Greek and Hebrew, and the church fathers drove this movement in France, as elsewhere in Europe.

Again, the emphasis of this book is on the French Huguenot movement being, in essence, an extension of the Reformation at Geneva (with a nod to Strasbourg). That may have been the eventual orientation. But Lausanne had still earlier been a safe haven for Huguenot refugees, and it was from there that the disruptive posters of 1534, known as “les Placards,” originated. Huguenots turned to Lausanne once more in the 18th century after their colleges had been closed. It has also recently been stressed that the Huguenot movement was theologically diverse; those initially influenced by the biblical translation work of Lefevre d’Etaples did not necessarily turn into orthodox Calvinists. Among Calvin’s strident Protestant critics were some fellow refugees from mid-sixteenth century France.

The Huguenots movement did have a ‘golden era’ of sorts in the first decades of toleration following 1595. Its preachers gained international notice, and its theological scholars in four academies were taken with great seriousness. But these attainments are sidelined in a narrative mostly focused on troubles. Finally, the volume could have been made more reader-friendly. In many sections, the paragraphs run to a page or more.

Stephen Davis’s The French Huguenots and the Wars of Religion has the field largely to itself when it comes to current, accessible books which explain the ordeals and survival of the early French Protestant movement. The reviewer wishes this book a wide readership and, in time, an enlarged second edition.