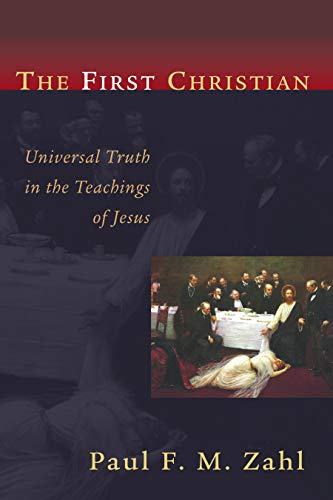 THE FIRST CHRISTIAN: UNIVERSAL TRUTH IN THE TEACHING OF JESUS

What NT student (or teacher) hasn’t been daunted by the prospect of doing justice to the various scholarly quests for the historical Jesus? The problem is finding a good place to stand—a suitable vantage-point from which to take in their scope and make sense of the interpretative detail involved. Paul Zahl’s little book could be just the thing. It is all about discontinuity and difference, as one sentence may illustrate: ‘Christ’s discontinuities with his context are the substance of his continuity with the religion that bears his name’ (113).

Now, as everyone exposed to recent historical Jesus research well knows, the continuity of Jesus with Second Temple Judaism is considered to be the main point. Here is the context in which he is rooted, the back-drop against which his preaching and other activities are to be understood. Our authors agrees with the basic premise (‘Jesus the Jew’), whilst insisting that similarity alone cannot explain genius. For Zahl, the actions and words of this Jesus in proclaiming and demonstrating a kingdom which was ‘not yet but soon’, contain all the seeds from which something radically new—Christianity—would grow. Hence ‘Jesus the Christian’, and the provocative title of the book.

After thirty-five years of reflection on the Jesus quests and thirty years of relating this study to parish ministry, Zahl puts forward the view that the deeds and message of Jesus as described by the Synoptic Gospels contain five seeds of profound discontinuity whose germination and sprouting would produce a fully-flowered Christianity. These five seeds, which we might call Christianity in a nutshell, are: a message of repentance for a new age of grace; exorcisms which confirm that this new era has now dawned; antitheses (from the Sermon on the Mount) concerning the Jewish law which underwrite a whole new way of practising torah—the way of universal compassion; teaching on purity which presupposes psycho-genetic sin and as a corollary, the need for atonement; and finally, free association with ‘sinners’, the only category of guests to be invited to the kingdom feast.

For Zahl, these five emphases distil the essential newness of Jesus which separated him from what went before. The perceptive reader will already have noticed that an argument which firmly locates Christianity’s originality in Jesus himself, renders unnecessary the persistent thesis required by more down-sized assessments, namely, that Paul was the real genius and Christianity’s real founder.

If this book were a chemical, it would probably be paint stripper: very useful, therefore, to all confused by the multiple coats of varnish with which the historical Jesus of the questers has been so overlaid. This reviewer had to struggle with Zahl’s style, a quirky amalgam of racy and formal English that often made it difficult to grasp his meaning at the first read, but this feature ought not to deter potential readers of what is a bold and timely reassertion that the Jesus of history is the Christ of faith.