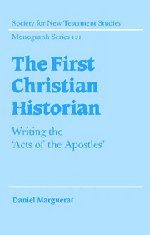 THE FIRST CHRISTIAN HISTORIAN: WRITING THE ACTS OF THE APOSTLES

Within Lukan studies, there are several well-known conundrums, such as the genre of Acts, Luke’s view of the Jews, and the reason behind the seemingly unfinished ending of Acts. Marguerat approaches many of these difficult topics in his book, providing often innovative solutions that go well beyond the usual answers in scholarly literature. In order to do this, Marguerat provides quite abbreviated introductions to each issue, with bibliography for the beginning student to follow up on in order to understand the details of the issue being discussed. While the book is accessible to any serious student, this fact makes the book more useful to those already conversant with current Lukan scholarship. Readers of this journal may not always find themselves in agreement with Marguerat’s positions, but his is an important voice and should be heard. In each of the eleven chapters of the book Marguerat probes issues related to narrative structure and strategy. His narrative approach provides him with a means to get around the impasse on many topics.

Rather than simply summarising the book I will relate several of the more helpful or unique interpretations offered by Marguerat. Chapter one makes the argument that historical writing is a narrative, with plot and characters and therefore, the difference between historical writing and storytelling is not nearly as great as that asserted by positivism. Marguerat seeks to take seriously the fact that Luke, as an historian, wrote a narrative, which means that he deliberately included some things, excluded others and presented events and people in a way that would suit his goals as a historian. Rather than writing after the model of Thucydides, Luke is much closer to Josephus or the author of Maccabees.

Many of Marguerat’s positions have a ‘both-and’ nature, rather than being ‘either/or’. For example, in chapter four, he argues that Luke neither completely abandons Judaism nor completely embraces the Roman empire. Instead, his theological programme is one of integration. While the Lukan Paul does not impose the Torah upon all, neither does he give it up, which would have been offensive in Greco-Roman eyes. Chapter seven discusses the issue of Luke’s view of the Jews. While some see Luke as ultimately rejecting the Jews, and others see Luke as having a positive view of the Jews in general and holding out hope for their salvation, Marguerat argues that this is a false dichotomy. The reason that scholars can find support for both of these positions in Acts is that Luke himself wrestled with the rejection of the good news by a large proportion of Israel. Luke himself had no ultimate explanation for this and did not have a completely worked-out position. Hence, the seeming contradictory evidence in Acts reflects not a failure in narration on Luke’s part but his own uncertainty. For Luke, the Jews are responsible for rejecting God’s witnesses. At the same time, they are still God’s chosen people.

Chapter nine argues that the three accounts of Saul’s conversion must not be compared simply for details but read within the specific context and function of each account, in contrast to those who see the accounts as simply evidence of Luke’s poor skills as a handle of sources. In chapter eleven Marguerat provides a helpful survey of ‘travel’ in Hellenistic literature, arguing that Luke has a much greater interest in travelling than Hellenistic novels (though Marguerat’s use of novel, like that of other scholars, is more than a bit anachronistic, and that Luke’s ‘travel narrative’ is misnamed, as this represents an itinerant sage, rather than travel as such.

All in all, Marguerat offers many helpful suggestions and insights into Luke’s narrative project. While many topics could be treated in more detail to work out his argument in full, this book is an important contribution to Lukan studies.