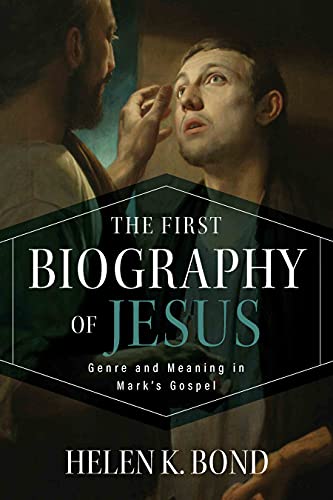 The First Biography of Jesus: Genre and Meaning in Mark’s Gospel

This fine book fills a key gap in study of Mark’s Gospel. As Professor Bond observes, the scholarly consensus has shifted in recent years to the view that the canonical Gospels are ancient biographies (bioi), rather than being sui generis, not least because of the influence of Richard Burridge’s work. This consensus has found its way into introductions to Gospel commentaries, but has not been fully worked out in reading a Gospel. Accordingly, Professor Bond seeks to read Mark from this perspective: the result is a book which is very well researched, limpidly clear, and beautifully written (something one can rarely say of scholarly writing).

Professor Bond is known for her careful historical work in relation to NT characters (notably Pontius Pilate, Caiaphas, and the historical Jesus). She here applies her historian’s skills to engaging with a wide range of ancient biographical literature in order to assess Mark as a biography. She is clear that she is not seeking to prove that Mark is a biography, but wants to see how understanding Mark as biography illuminates its interpretation (p. 12). A brief introduction outlines the book’s aims, a brief sketch of authorship, date, and location for Mark’s Gospel, and an overview of the book. A review of scholarship (ch. 1) traces how Mark has been read, identifying the recent consensus that the Gospels are ancient biographies. Professor Bond sketches the shape and contents of ancient bioi (ch. 2), before looking at Mark as biographer (ch. 3). Three key chapters review Jesus’s life according to Mark (ch. 4; 46 pp.), other characters in Mark (ch. 5; 54 pp.), and Jesus’s death in Mark (ch. 6; 30 pp.)—these are the heart of Professor Bond’s interpretation of Mark as biography. Brief “Final Reflections” conclude, reviewing and summarizing the argument. A 35–page bibliography shows the depth of Professor Bond’s reading.

This thoughtful book has much of value; it is at the cutting edge of academic study of Mark. Professor Bond stresses that Mark is a reception of the Jesus tradition, and not a passive reproduction of material (p. 5). In particular, by using the genre of bios, Mark expands early Christian proclamation of the death and resurrection of Jesus to include the stories of his life and teaching. She places Mark’s writing in the early-to-mid 70s, following the fall of Jerusalem, located in Rome, and identifies Mark as a church leader and an educated man.

In sketching features of ancient biography (ch. 2), Professor Bond has been influenced by the important classicists Thomas Hägg and Christopher Pelling. She notes that “Biographies … were exempla writ large” (p. 47), i.e., that they existed to teach and influence readers/hearers. She sees Mark’s biography as close in many respects to philosophers’ lives. She is critical of narrative-critical approaches because they read ancient writings using tools for reading modern novels; rather, she aims to read Mark in tune with ancient writers. She also notes the importance of the subject’s death, whether good or bad, in many bioi. She highlights biographers’ freedom to tell anecdotes about their subject which may not be entirely factual, and thinks Mark does this in places.

So what kind of biographer is Mark (ch. 3)? He uses forms known from the progymnasmata (p. 85), and utilises comparison to highlight his subject (synkrisis, p. 86). He writes as a Jesus-follower of Jewish heritage for fellow-believers (pp. 90, 94), to keep Jesus’s memory alive (p. 92). Professor Bond notes Richard Bauckham’s argument that the Gospels were written for a wide audience, and cautiously agrees that Mark is not writing for a very particular local Jesus-community.

Professor Bond then reads Mark in conversation with the ancient biographical tradition, with great effect (ch. 4). She argues (controversially) that Jesus’s baptism is Jesus’s adoption as God’s Son, as the Spirit infuses him, rather than the baptismal vision confirming Jesus’s existing status (p. 128). Jesus’s deeds compare with healings by emperors, and storm-stillings told by Diogenes Laertius. Jesus himself is “an example of a way of life rather than the mouthpiece of a doctrine” (p. 150 n. 108)—although his teaching is important in similar manner to philosophers’ teachings, Jesus’s consistency of life and word are vital to understanding him aright. Jesus’s rejection of worldly honour and devaluing of wealth and comfort has parallels among philosophers and in Philo’s Life of Moses (p. 154), and Mark wants his audience to share such values (p. 160). The lack of description of Jesus’s appearance contrasts with many bioi, and thereby opens Jesus to a wide range of people as a model for imitation (p. 165). In sum, Mark’s biography calls people to be committed to Jesus as a real person with whom they engage (p. 166).

In considering other characters (ch. 5), Professor Bond notices the lack of consistent characterization of these people. Given that she sees Mark as grafting anecdotes together into a narrative, this is unsurprising—indeed, only Peter among the disciples speaks (p. 194 n. 92). Other characters come on stage for brief appearances with the sole function to illuminate the subject, Jesus, often by enhancing a quality Jesus has. This is even true with the Twelve: Professor Bond argues that narrative critics over-read characters in Mark for consistency and coherence, rather than seeing them in relation to Jesus. Specifically, she argues (cogently, in my view) that the Twelve are not models of discipleship in Mark—rather, Jesus himself is the model for faithful discipleship (p. 196). The disciples highlight Jesus as teacher gathering followers, are foils who enable Jesus to expand his teaching, and show Jesus’s courage and loneliness in death by contrast, as they abandon him (pp. 197–209).

Concerning Jesus’s death (ch. 6), Professor Bond highlights crucifixion as a slave’s death, by contrast with philosophers (e.g., Socrates, who swallows hemlock). She stresses Jesus’s passivity and abandonment (by people and by God) in his death. His death is deeply shameful, although Mark prepares for it with the passion predictions (8:31; 9:31; 10:33) and interprets it with the ransom saying (10:45) and Jesus’s eucharistic words (14:24). Jesus’s death is both means of redemption, and model of godly death—Professor Bond considers that Mark knows believers who have been martyred, and seeks to encourage others facing that fate. She provides a fine discussion of the phenomena of darkness and the temple veil’s tearing (pp. 241–46), arguing persuasively that the latter is a portent of the temple’s destruction and (thus) Jesus’s vindication.

There are few typos in this well-produced book, and the font is easy on the eye. I confess I was irritated by transliterated Greek throughout (the publisher’s decision, I imagine): if readers don’t have Greek, transliteration won’t help them; if they do, why not use a Greek font?

I have barely scratched the surface of this fresh, stimulating, and engaging book. I shall return it in my reading and teaching on Mark often. For those studying Mark at upper undergraduate and graduate level, this is essential reading (a term I do not use lightly).