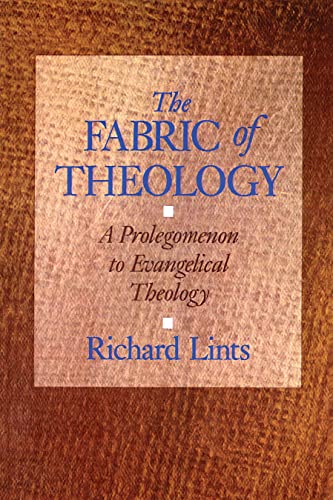 The Fabric of Theology: A Prolegomenon to Evangelical Theology

Richard Lints is concerned about the fragmentation of people’s understanding of God, the world and themselves as a result of modernity. He therefore offers an alternative, ‘a picture of theology as a whole fabric rather than a patchwork quilt’, a ‘vision that can facilitate the reinterpretation of life, of how we think, act, and live’ (p. 7). He argues rightly that theology is not simply a list of dogmas to be believed, it is a ‘framework for thinking about the world and a vision for living in it’ (p. 81). Its goal is to bring all of life under the judgment of biblical revelation and thus to bring the cleansing power of God’s redemption into all of life.

Lints sets the stage with an interesting description of the evangelical scene in America. He traces the formative influences and emphasizes the current fragmentation, reflected in the orientation to transdenominational proliferation of independent institutions. A measure of unity is observed, provided by commitment to a small core of doctrines that were defined in the battle against modernism.

In a chapter entitled ‘The trajectory of theology’, Lints gives an illuminating treatment of the manner in which tradition, culture and reason function in various efforts to do theology and makes helpful suggestions about how these three ‘filters’ ought to be used properly. He does a case study of the theological methodology of four groups or individuals who worked within the framework of Reformed theology: (1) the magisterial reformers Luther and Calvin, (2) the Reformed scholastics of the 16th and early 17th centuries, (3) Jonathan Edwards and (4) Geerhardus Vos. He then clearly delineates the state of postmodern theologies, identifying family resemblances (pluralism, the prophetic role and epistemic pragmatism) and the historical and cultural factors that have influenced this development. This is a fine depiction of the ways in which postmodernism is a continuation of the basic critical consciousness of Enlightenment modernism and of the ways in which it differs. It offers a peculiar challenge for evangelicals. On the one hand, evangelicalism itself has been influenced deeply by modernism and needs to hear the postmodern critique of modernism. On the other hand, divinely revealed truth is much less diverse than postmodernism assumes and the Bible continues to be our authoritative source for finding it, contrary to the objections of both modernist and postmodernist theologies.

Lints’s own proposal is based on the conviction that the theological project is embedded in the Scriptures themselves, understood in a redemptive-historical way to be a witness to God’s redemptive work and an effective agent of that redemption. A theological framework should situate us in redemptive history and thus ‘provide the grounds for us to remain prophetic within our unique cultural setting’ (p. 262). We must study Scripture with constant reference to three contexts, the textual, the epochal and the canonical. In the conversation between the theologian and the text, it is important that the questions of Scripture be listened to, rather than simply mined for answers to the questions that arise in the interpreter’s particular context. Scripture is to interpret the modern era rather than vice versa. Lints suggests ways in which this should be done within the church, within popular culture and within the academy.

The proposal of Lints is a fine reaffirmation of a theological method that recognizes the unique authority of Scripture but that is sensitive to the contemporary context. It urges us to restate biblical truth in coherent form for the present generation, but insists that the structure and not just the content of a theological framework is defined by the redemptive-historical form of Scripture itself. It is aware of the extent to which evangelicals have capitulated to modernity but refuses to accept the postmodernist antidote. Anyone who wishes to understand the contemporary theological methodological scene and to advance the church’s work of developing a comprehensive vision of all of life from God’s perspective will profit from this book. It will be beneficial to both the professional and the serious lay theologian.