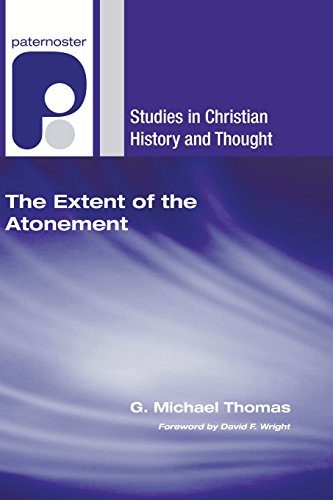 The Extent of the Atonement: A Dilemma for Reformed Theology from Calvin to Consensus

Written by G. Michael Thomas Reviewed By A. T. B. McGowan
History and Historical Theology

This volume, in the Paternoster Biblical and Theological Monograph series, is based on Michael Thomas’ doctoral thesis. It is a solid and well-argued piece of work which challenges previous contributions to the vexed question of the extent of the atonement as expressed in Reformed Theology.

The book covers the period from 1536 to 1675. After a brief discussion of the medieval background, the focus turns to the sixteenth century with an assessment of the positions taken by Calvin, Beza, Bullinger, Zanchi and the Heidelberg theologians (Ursinus, Olevianus etc.). The next main section deals with the Synod of Dort and the Arminian controversy. This is followed by one dealing with the Amyraldian question, beginning with John Cameron before going into a detailed study of Amyraut himself and the debates following upon his views. The final section is Thomas’ conclusion in which he draws the threads of the argument together and makes a bold suggestion as to the way forward for Reformed theology.

Those who have studied the modern debate on the subject of the extent of the atonement in Reformed theology will know that it is a complex subject indeed. The question originally centred on whether or not Calvin taught limited atonement, a discussion which began with a dispute between Paul van Buren and John Murray and continued through the writings of Roger Nicole, Brian Armstrong and Robert Godfrey, before being opened out into the wider Calvin versus Calvinism debate involving R.T. Kendall, Alan Clifford, Paul Helm and others. More sustained (and contradictory) contributions by C. D. Daniel and J.H. Rainbow have simply added to the controversy.

Thomas’ contribution is most significant. His study of the key figures and movements is thorough and his arguments deserve careful consideration. His thesis is that there has never been a consensus within Reformed theology but rather that there have always been two elements held in tension: the universal offer of the grace of God in the gospel and the doctrine of predestination. The former seemed to require a universal atonement while the latter seemed to require a restricted and limited atonement. Different theologians emphasised the one point or the other and hence two contradictory views on the extent of the atonement were held within Reformed theology.

Thomas demonstrates that these two views were in evidence throughout the period and that, at different times, the one emphasis or the other prevailed. Interestingly, he rejects the all too common (and simplistic) Calvin versus Calvinism debate, representing this distinction as a failure to recognise the complexity of the issue. Similarly, he rejects the argument which implies that there was complete agreement on the extent of the atonement within the Reformed tradition with the exception of the Amyraldians.

In a postscript at the end of his concluding chapter, Thomas reveals his own view as to the way forward for Reformed theology. This postscript argues that Barth’s understanding of predestination cuts through the difficulties which, as Thomas has demonstrated, exist within the Reformed tradition and offers a solution to some of the apparently intractable difficulties. It is not clear whether this postscript appeared in the original thesis, although it seems unlikely since it is presented starkly and without argument or support.

While not agreeing with all of his historical analysis, particularly his judgement on Beza and on the Synod of Dort, the present reviewer believes that Thomas has provided considerable help to those who are interested in the debate concerning the extent of the atonement within the Reformed tradition. It must also be said, however, that his contribution is greatly weakened by the unwarranted addition of the postscript arguing for something like Barth’s view on predestination, a postscript which bears no relation to the substantive argument of the book. Far better to have left the book as an historical assessment of the debate within Reformed theology in the sixteenth and seventeenth centuries and to have written another book arguing for the way forward.