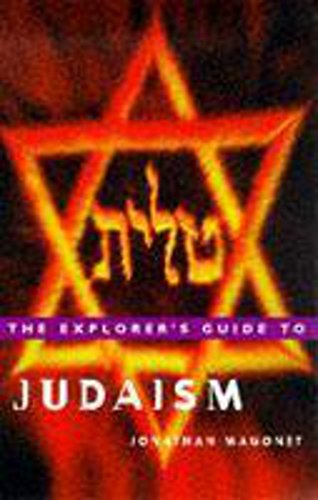 The Explorer’s Guide to Judaism

As Principal of the prestigious Reform Judaism Leo Baeck College Rabbi Jonathan Magonet introduces his readers to Judaism from an obviously more liberal perspective. The book immediately impresses us with its open-hearted candour and its very Jewish use of humour and aggadic illustrative stories. Rabbi Magonet happily admits to the unexciting boredom which often afflicts those who attend synagogue services, but shows how he and others have penetrated beyond this to the riches of Judaism’s tradition. Like his co-worker and close friend Lionel Blue he clearly delights in his Jewishness while seeing all the weaknesses. Jewish practice is rich and meaningful even if generally not understood—but, as he says, many still sincerely believe and mean what they don’t understand at all!

The conflict between more liberal contemporary forms of Judaism and the more traditional Orthodox authorities lies close to the surface in many of the topics discussed. Throughout the book Magonet takes every opportunity to advocate and support the cause of women—Orthodox rabbis might disagree quite radically! The relatively short section on homosexuality is more cautious, but seems also open and positive towards homosexuals. Strangely the details of divorce procedures are described without a parallel description of weddings and marriage—a sad reflection on contemporary British society?

Readers looking for detailed descriptions of Jewish festivals and their theological or historical meaning, kashrut or other key elements of the practice of Judaism may be disappointed. Likewise this book will not give a systematic presentation of the theology of Judaism. But the reader will gain an excellent and well-written insight into the issues and debates within the life of many Jewish people.

As a Jewish Christian I regretted the author’s failure to address the topic of messianic Jews. The Lubavitch Chassidic Jews are still accepted as Jewish although they consider their dead Rabbi Schneersohn to be the messiah, but somehow Magonet’s liberalism cannot stretch to accept as Jews those of us who believe Jesus of Nazareth to be messiah. Indeed the only reference to the very Jewish mission Jews for Jesus is lumped together with Moonies and Hari Krishnas as a cult. In a diplomatic liberal way the book is further sprinkled with tolerantly negative comments about Christianity generally.

Despite the negatives I would warmly recommend this book as one which will give its readers a feel of Judaism from the inside and in a genuinely Jewish way.