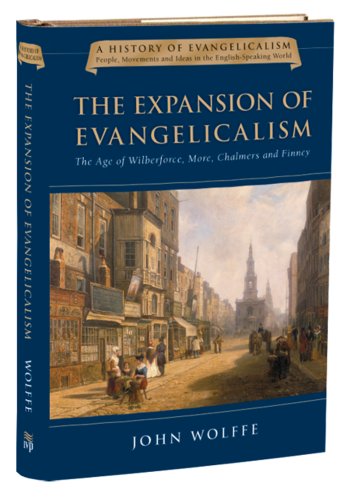 The Expansion of Evangelicalism: The Age of Wilberforce, More, Chalmers and Finney

Written by John Wolffe Reviewed By Nathan A. Finn
History and Historical Theology

Every year scores of books and articles attempt to make sense of the history of evangelicalism. For the past two decades a number of scholars have argued that evangelicalism is a relatively diverse interdenominational, transatlantic movement first birthed during the awakenings of the mid-18th century. The leading proponent of this interpretation is Scottish historian David Bebbington, himself an evangelical. Bebbington and Notre Dame historian Mark Noll are co-editors of the award-winning series A History of Evangelicalism: People, Movements and Ideas in the English-Speaking World. John Wolffe’s recent book The Expansion of Evangelicalism: The Age of Wilberforce, More, Chalmers and Finney is the latest volume to appear in that series.

Like all the authors in the series, Wolffe assumes the Bebbington paradigm for evangelical history. He also follows Bebbington in defining evangelicals as Protestants who affirm four theological distinctives: biblicism, conversionism, activism, and crucicentrism. The Expansion of Evangelicalism focuses on the period roughly coinciding with the Second Great Awakening in America, 1790–1850. As evidenced by the title, Wolffe argues that this period was a time of remarkable numeric growth for evangelical denominations and ministries. He illustrates this theme well with numerous statistical charts based upon government records and denominational studies. As with the other volumes in this series, major themes include the role of revivals and awakenings, theological emphases and developments, evangelical political engagement, the contributions of women and minorities, and movement diversity within the broad boundaries of Bebbington’s “evangelical quadrilateral.”

Wolffe divides his book into eight chapters. Chapter one introduces some of the key figures around whom Wolffe builds his narrative, including the four individuals noted in the book’s subtitle. Chapters two and three discuss the development of the Second Great Awakening and the influence of the revivals upon evangelical theology and practice. Chapter four describes the popular spirituality and worship of evangelicals during this period (a strength of all the books in this series) while the fifth chapter focuses upon gender and family issues among evangelicals. Chapters six and seven highlight cultural engagement, particularly in matters of social justice like slavery, temperance, and working conditions in an increasingly industrialized West. The final chapter, heavy on statistical charts, addresses the unity and diversity among evangelicals, emphasizing some of the denominational divisions taking place and the approximate growth of each major tradition.

The Expansion of Evangelicalism shares many of the strengths and weaknesses of the entire series. One strength is the way Wolffe helpfully synthesizes social and intellectual history, examining the convictions and practices of both clergy (and other leaders) and laity. Wolffe also highlights the particular contributions of women, a topic for which he clearly cares deeply, though he avoids an overtly feminist reading of evangelical history. The book’s bibliography is also a valuable resource for those who desire to examine some of the more specialized studies related to the era under consideration.

A possible weakness of the book (and series), though perhaps understandable, is the uncritical acceptance of the Bebbington interpretation of evangelical history. A growing number of scholars are questioning the thesis that evangelicalism did not emerge until the 1730s. For example, a recent volume co-edited by Michael A. G. Haykin and Kenneth Stewart titled The Emergence of Evangelicalism (published in the UK by Inter-Varsity and in the US by Broadman and Holman) includes seventeen essays challenging the Bebbington thesis from a number of different angles, as well as a response from Bebbington. Of course whether or not Wolffe’s acceptance of Bebbington’s paradigm is a weakness or strength of the book depends upon the reader’s perspective (full disclosure: the reviewer does not yet have a settled conviction on this matter). Another weakness is the lack of nuance when it comes to particular denominations during this period, though this is likely a result of the survey nature of the book.

These weaknesses (both real and possible!) do not in any way detract from the value of the book. The Expansion of Evangelicalism, like the other available volumes in the A History of Evangelicalism series, is a valuable resource for pastors, students, and scholars. This series is simply the best introduction to evangelical history currently on the market, and Wolffe’s contribution continues the high standard established by the earlier volumes.

Nathan Finn is associate professor of historical theology and Baptist studies at Southeastern Baptist Theological Seminary, director of Southeastern’s Center for Spiritual Formation and Evangelical Spirituality, and a book review editor for Themelios. He is co-author of the forthcoming book The Baptist Story: From English Sect to Global Movement (B&H Academic).