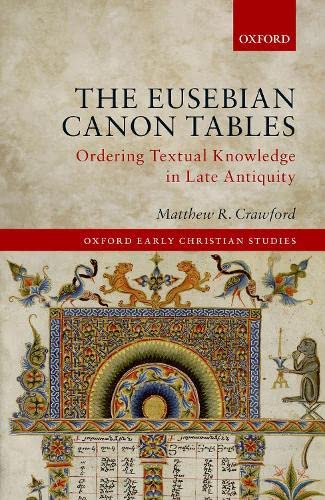 In the fourth century, Eusebius of Caesarea designed a systematic mechanism that would assist in the reading and analysis of the Gospel narratives as part of a fourfold grouping. This paratextual apparatus had three central components: (1) an introductory preface (Letter to Carpianus), (2) a set of ten tables that contained lists of section numbers that corresponded to textual locations in the Gospels, and (3) the section numbers themselves that Eusebius marked in the margins throughout a given codex edition of the four Gospels. These elements equipped a reader of that edition with the means to quickly locate the places in each Gospel that are unique or in parallel with another Gospel. This series of marked sections, along with the explanatory notes and the columns themselves, represented a sophisticated cross-referencing system.

In The Eusebian Canon Tables: Ordering Textual Knowledge in Late Antiquity, Matthew Crawford provides a comprehensive analysis of Eusebius’s apparatus. Though the presence of cross-references is a common feature of modern printed Bibles, as Crawford observes, “this was an innovation of remarkable proportions for its day” (p. 7). Crawford’s aim in this volume is to explain and illustrate “the ingenuity that went into its creation and the way in which readers interacted with it in the eight centuries thereafter” (p. 7). Interestingly, Crawford notes that there has been a relative neglect of Eusebius’s Canon Tables in historical scholarship. Crawford speaks into this lacuna in large part because “the story of the reception of the Eusebian Canon Tables is paradigmatic for the history of late antiquity as a whole” (p. 16). As Crawford observes, “this innovative reading technology grew out of the long tradition of literary scholarship practiced above all in Alexandria, Egypt” and had a lasting impact on Gospel scholarship more broadly (p. 16).

The theoretical tools that Crawford utilizes to analyze the Canon Tables are paratextuality and information visualization theory. In this vein, Crawford argues that these tables were an integrated feature of a new edition of the fourfold Gospel where this “marginal apparatus related to the text of the gospels as a paratext” (p. 21). This feature, then, “served as the entryway into the text of the gospels and also ordered the disparate textual content contained therein, and in so doing shaped the reader’s interaction with this text (or rather texts)” (p. 21). Further, as well-designed “tabular matrixes,” the Canon Tables represent a “visual display of information that has the potential to reveal patterns or concepts that might otherwise take much longer to intuit, or even remain completely hidden” (p. 34). Using this device, “even an amateur reader of a gospel codex” (p. 53) could quickly discern both the relationship one gospel has to each of the others (by specific columns specifying these connections), and also the range of these relationships across the fourfold collection (the presence of ten columns rather than one). Crawford’s overview of these concepts showcases the unique and “startling creativity of Eusebius’s paratext” (p. 43).

How would a tool like Eusebius’s Canon Tables inform a study of the Gospels? On this question, Crawford reflects, “Eusebius’ paratextual system created intertextual links across the fourfold gospel and encouraged an open-ended, hypertextual reading of this corpus” (p. 16; see also pp. 96–121). This particular function and effect of the Canon Tables feature prominently in the reception history of this influential paratextual device. For example, Augustine drew upon the Canon Tables as a basis for his scholarship on the unity and diversity of the Gospels (ch. 4). Syriac versions of the four Gospels include a revised and developed form of the Canon Tables that builds on Eusebius’s foundational work (ch. 5). In the study of the Gospels among Irish scholars in the early medieval period (the Hiberno-Latin tradition), the Canon Tables are utilized more directly as a tool for exegetical analysis of textual parallels (ch. 6).

These tables were also decorated in various ways in manuscript illuminations. In some Armenian traditions, commentaries were written on the Canon Tables that focused on these artistic additions. Functioning similarly to the tables themselves, these images represent visual interpretations of the nature of the fourfold gospel as a complex unity that is part of the scope of redemptive history (chapter seven). The varied interpretive examples and historical contexts Crawford examines here are diverse (temporally and geographically) and demonstrate the wide-ranging influence that this textual tool has had on the reception of the four Gospels.

Considering the overall thesis of the book, Crawford convincingly demonstrates that Eusebius’s paratextual device represents serious textual and hermeneutical work on the Gospels early in the history of the churches. The Canon Tables allow a reader to see similarities and differences while maintaining the narrative presentation of each Gospel. “It is precisely for this reason,” Crawford reflects, “that the Canon Tables continue to be useful even today as a paratext for the fourfold gospel, in so far as they resist a separation of the form and the content of this corpus” (p. 293).

Throughout his analysis, Crawford takes decidedly complex discussions and provides a path for non-specialists in other disciplines to understand and reckon with the initial and ongoing significance of Eusebius’s scholarship on the Gospels. The full-color images of manuscript pages containing portions of the tables also add considerable value to the book. Because of its well-sourced and carefully developed argument, Crawford’s volume is a first-rate resource for serious study of the Eusebian Canon Tables.