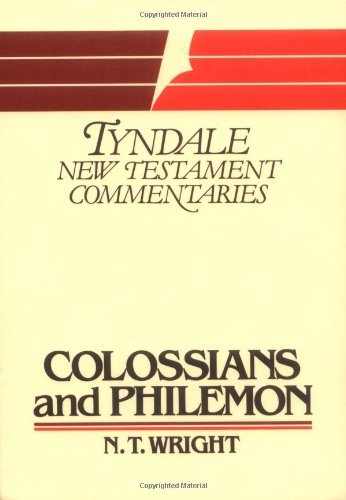 The Epistles of Paul to the Colossians and to Philemon: An Introduction and Commentary

The Tyndale New Testament Commentaries are being revised to serve a new generation, and Tom Wright has provided us with an excellent model. It is both admirably untechnical and lucid, while yet also being theologically nuanced and providing a fresh and original contribution to the understanding of the letters, particularly of Colossians.

Colossians, like most (if not all) of Paul’s letters, was written to particular historical circumstances, and how one understands the situation addressed affects the reading of the whole letter. It is usually surmised from the warnings in 2:8–21 that Paul is facing some sort of heretical teaching, and the hunt is then on to define the heresy. Unquestionably the false understanding Paul opposes has Jewish elements: these come to clear expression in the mention of regulations concerning foods, festivals, new moons and sabbaths (2:16), in the (implicit) argument about circumcision (2:11; 3:11) and in the enigmatic reference to ‘worship of angels’ (2:18). For most scholars, however, this is not the whole story: the emphasis in the epistle on Christ’s superiority to the powers (1:16; 2:20), on the importance of ‘knowledge’, on visions (2:18) and on asceticism (2:20–23) means that the false understanding was a syncretism of Jewish and pagan religion—usually identified as a sort of proto-Gnosticism (so R. P. Martin); although it has also been understood as a special brand of mystical apocalyptic Judaism (e.g. F. F. Bruce). The embarrassment that both these must face is that there is no evidence for such a group at Colossae, and the former has to draw evidence from much further afield and from later writings.

Wright circumvents this last criticism by arguing Colossians is polemic against Judaism itself:

… Paul is warning the readers not to be taken in by the claims of Judaism, which would try (as in Acts 15:5) to persuade converts to Christianity that their present position was incomplete. On the contrary, Paul declares: in Christ you have already been ‘circumsised’, and you have been set free from any claim that the Jewish law might make on you. No-one must therefore attempt to exclude you from the inner circle of God’s people (2:16, 18, 20). The master stroke in Paul’s argument is thus that he warns ex-pagans against Judaism by portraying Judaism itself as if it were another pagan religion. It is a ‘philosophy’ (2:8) developed by human tradition (2:8, 22): and to follow it is to return to the same type of religion the new converts had recently abandoned (pp. 24–25, reviewer’s italics).

In other words, Wright thinks Paul is doing in Colossians what he did in Gal. 4:1–11; only in Galatians Paul is facing Judaizing that has already begun, while in Colossians it is treated as a real danger, but only potentially so. This thesis starts with the advantage of a measure of a priori probability (i.e. the situation envisaged must have been one Paul constantly faced), but it is also carefully argued in the introduction, in fuller and more technical essays forthcoming, and in the commentary itself. The letter, he thinks, was probably written from Ephesus in the early fifties (hence the close parallels with 2 Cor. 3–5 as well as with Gal. 3–4 and Rom. 7:1–6), and is genuinely Pauline.

The commentary proper, both on Colossians and on Philemon, is unusually clear; commentators all too often seem to hide behind the learned discussion of technicalities, and forbear to say what they think the writer really means, but Wright avoids this. Even when he is dealing with the most complex sections (such as 1:15–20 and 2:13–19), it is always clear what he thinks Paul is saying, and how it relates to the rest of the letter. He has a good eye too for irony: see for example the light thrown on the notoriously difficult sentence in 2:15 by his assertion,

These powers, angry at his challenge to their sovereignty, stripped him naked, held him up to public contempt, and celebrated a triumph over him. In one of his most dramatic statements of the paradox of the cross, and one moreover which shows in what physical detail Paul could envisage the horrible death Jesus had died, he declares that, on the contrary, on the cross God was stripping them naked, was holding them up to public contempt, and leading them in his own triumphal procession—in Christ, the crucified Messiah (p. 116).

And within the confines of the allotted space, Wright also indicates the significance of what is said for theology, for the church, and for the individual Christian. Nor does the commentary suddenly become pedestrian when it comes to the more detailed ethical considerations in Colossians (chs. 3 and 4) and in Philemon. On the contrary, the warm-hearted and theologically perceptive exposition of the latter oft-neglected book is itself more than worth the price of the whole—and the reviewer would say the same even if the book cost twice as much! This is a commentary that deserves wide reading.