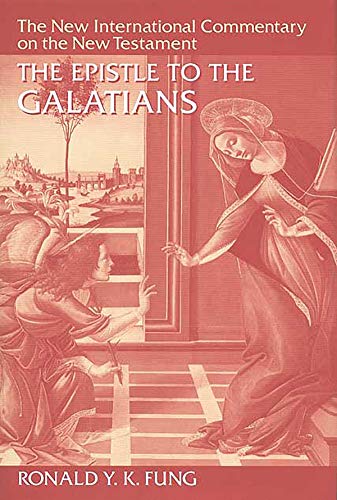 The Epistle to the Galatians

The twenty-five-year-old commentary on Galatians by Ridderbos, one of the earliest in the NICNT series, has now been replaced by a completely new work. While basing his comments on an English text, Fung is well able to interact with the original (though helpfully all the Greek is transliterated except in the footnotes). It is a little ironic that its publication should coincide with that of the Revised English Bible, for the translation used is the NEB. This is an odd choice for several reasons, and in fact Fung’s favoured version seems to be the NIV.

Thirty pages of introduction cover the main issues which critical orthodoxy dictates as essential for commentators: the location of the churches, the identity of the agitators, date and genre. The coverage of the secondary literature is just a trifle idiosyncratic: George Howard’s position, which for all its weakness contains some very significant observations, is dismissed in a line; B.H. Brinsmead’s, which Fung seems to like no more than the reviewer, is allowed more than a page of footnote! The conclusions are never startling. The ‘heretics’ (Fung’s word) are Judaizers; we are not told what that term means, or what message they brought which was able to make the Galatians enthusiastic supporters of what was seen as the revolting habit of circumcision. We are told that they accused Paul of ‘relaxing the terms of the gospel … in order to make conversion easy’ (p. 48), an accusation revived in our day by Francis Watson. (One wonders why, if so, Paul put so much explicit stress, in contrast to the rest of the early church, on the shocking mode of Jesus’ death.) Fortunately, for large parts of the commentary, the answers one gives to these introductory questions are immaterial; but insofar as they are interesting in themselves, the approach of G. Lüdemann (and effectively also that of G. Howard) is an unfortunate absentee. Otherwise, the coverage of secondary material is commendably thorough.

The pattern of the commentary follows that of other members of the series, with only the briefest introductions to the major divisions, and the text split into very small units for detailed comment. Eight ‘Additional Comments’ interspersed in the text cover such issues as ‘Why Paul Persecuted the Church’ and ‘Paul’s Treatment of the Hagar-Sarah Story’. Is the reviewer alone in finding this pattern, though standard, unhelpful in enabling one to see either the author’s critique of other positions or his own understanding of the development of Paul’s argument? Within his constraints Fung provides clear discussion of the individual sections, but leaves one wondering still why Paul wrote as he did, and whether the opponents believed Paul’s converts to be Christians who needed a second-stage experience, heathen who still needed conversion, or what.

One area where Fung is manifestly weak is that of linguistic awareness. In the section on Paul’s use of the Hagar-Sarah story there seems to be a muddling of linguistic and historical issues. Paul is contrasted with other Jewish exegetes ‘since Paul treats the Genesis story as historically true’ (p. 217); ‘Paul’s starting point is the historical truth of the Genesis narrative’ (p. 218). If this is simply saying that Paul believed Genesis, then of course that was true of all Jewish exegetes (as Fung acknowledges in a footnote). But Paul’s argument no more depends on historical truth than anything in Genesis Rabbah. This same defensiveness over ‘historical truth’ also leads to a muddying of the waters over whether Paul’s argument is allegory, typology or analogy. The doctrine of the instantaneous aorist is maintained in the face of all the evidence (even when a footnote accepts the possibility of it being ‘timeless’, p. 223!); and at various places reference is made to Trench’s Synonyms, as though no work had been done in this area for a century; as though Barr had not introduced a revolution in theologians’ thinking about linguistic functions. Paul’s language is interpreted with heavy-handed woodenness, so that we are asked to believe that the opponents ‘of set intent wanted to “distort” or “pervert” [RSV] the gospel of Christ’ (p. 45, emphasis added). Similarly, Peter’s fault at Antioch was ‘failing to have the courage of his own convictions’ (p. 109). Is this psychologically credible? Is this really how they would have seen themselves? Howard’s caveats are particularly apposite here. Belief in divine inspiration, be it never so strongly held, surely need not force us to this sort of literalism.

This leads this reviewer, sadly, to doubt several of Fung’s interpretations, especially about the various ‘gospels’ in chapters 1 and 2, and about Paul’s understanding of the relationship between Jewish and Gentile Christians in 3:23–29 (where Fung fails to make the distinction, arguably crucial to Paul, between the ‘we’ and the ‘you’).

Related to this is the fact that exegetical points in cases of ambiguity are not assessed against any coherent understanding of the epistle, but only with reference to other scholars (whose overall interpretations of the logic of Paul’s argument differ significantly; as e.g. the ὅτι at 4:6). Too often one may want to ask, But why does Paul say this? How does it fit in his overall argument? and (if Fung is right) How could his readers have understood him properly?

Thus, while every reader is bound to benefit from Fung’s clarity, Galatians yet awaits an adequate commentary.