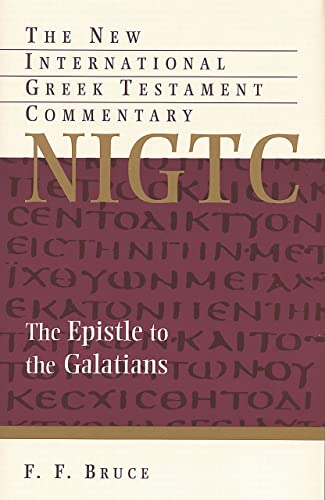 The Epistle to the Galatians: A Commentary on the Greek Text

The publication of all new work by F. F. Bruce, the Emeritus Professor of Biblical Exegesis at Manchester University, is both keenly anticipated and warmly welcomed—and, perhaps, especially so when this work concerns a letter which, as the author remarks in his preface, has been for him ‘for many years a document of special interest and study’. Certainly, his special attention has been fixed on Galatians at least since 1968, when the first of his series of five lectures on ‘Galatian Problems’ was given (and the series subsequently published in BJRL 51–55 (1969–73)). This volume also represents an addition to the extremely valuable New International Greek Testament Commentary series, which, according to the editors’ Foreword, is aimed at students who can read the Greek text but who want something less technical than a full-scale critical commentary. These commentaries are designed to harvest the results of recent research and ‘to provide a theological understanding of the text, based on historical-critical-linguistic exegesis’.

Bruce presents quite a full introduction which includes a particularly clear and detailed argument of the ‘South Galatian’ hypothesis, as well as discussions of the date of the letter, the nature of the opponents and the relationship of Paul’s gospel to the teaching of Jesus. Almost all of this material is taken over exactly from the BJRL articles mentioned above, with a few additions and a brief outline of the contents of the letter. This is followed by a useful select bibliography of commentaries and relevant books (which perhaps could have been helpfully augmented by a list of the more important articles on Galatians).

The commentary itself is divided into manageable sections which are introduced by the author’s own translation and brief textual notes. In his comments on each verse (which are liberally peppered with Greek) Bruce shows his familiarity with a vast range of material. He draws extensively on his expertise in classical Greek and his thorough knowledge of the whole New Testament. At each point he is able to refer to a rich store of relevant scholarly articles, while he summarizes the issues clearly and concisely and reaches conclusions which are generally both cautious and wise. This is a veritable mine of information for anyone who wants to grapple seriously with the text; indeed, in some cases, the commentary seems rather over-burdened with detail and would have made easier reading with the use of footnotes. But the breadth of Brace’s scholarship certainly means that this is going to be one of the standard English commentaries on Galatians for some time to come.

There are some points, however, where criticism may be in order. In the first place, it is unfortunate that Bruce has not revised the material in the Introduction more thoroughly to take stock of the extensive discussion of Galatians since 1973. This lack is particularly noticeable in two areas: (1) as concerns the character of the opponents, Bruce makes no mention of the view, often now represented in German literature, that these men were not simply Pharisaic Jewish-Christians but held a more or less syncretistic range of opinions including worship of angels and the stoicheia (3:19; 4:3, 9); (2) Brace’s outline of the structure of the epistle is very sketchy and fails to give more than the briefest comment on the much-discussed pioneering work done in this field by Hans Dieter Betz. Betz’ commentary (in the Hermenia series, 1979) apparently appeared when this volume was ‘well on its way to completion’ (p. xiii)—although his seminal article in NTSappeared much earlier, in 1975. It is particularly sad that we have not been able to benefit from Brace’s classical knowledge in assessing Betz’ use of the rhetorical handbooks, which has opened up many new insights into the letter.

Secondly, although one of the strengths of this commentary lies in its historical discussions, even these give rise to some difficulties. The lengthy introductory chapter on the date of the letter is mostly taken up with a comparison of Galatians with the theology and style of the other Pauline epistles—a method which is finally (and rightly, in my opinion) deemed to be indecisive (p. 55). In the end Bruce dates the letter (on the eve of the Acts 15 Jerusalem Council) by means of Acts, and it would have been better to have adjusted the proportions of space to give room for a fuller discussion of the relationship between Acts and Galatians. This is particularly necessary as Bruce’s conclusion that Galatians 2 represents the famine-visit of Acts 11:30 is not without considerable problems: it requires his taking Galatians 2:4–5 as not only a parenthesis but also a reference to an incident which took place at a different location (Antioch, not Jerusalem) and at a later date (pp. 115–117)! A fuller discussion of the strengths, weaknesses and implications of the majority view (Galatians 2 = Acts 15:6ff.) would have been most helpful.

Thirdly, despite the emphasis in the Forward on a ‘theological understanding of the text’, it has to be said that Bruce nowhere tackles thoroughly the major theological issues which Galatians raises. Although he warns us against using this letter ‘to present a lop-sided construction of the apostle’s teaching’ (p. 42), he does not interact with the current continuing debate on the ‘centre’ of Paul’s thought—whether it lies in justification by faith, participation in Christ or salvation history (all of which are represented in Galatians) or in the future triumph of God (which is noticeably absent here). It would have been valuable to explore more fully the implications of this letter for Paul’s view of Judaism as well as the structure of his ethical argumentation: to regard 5:13ff. as a subsidiary defence against antinomian misunderstanding (pp. 25, 240) is now increasingly recognized to be unsatisfactory.

In most respects, however, Bruce has given us another extremely thorough piece of scholarship. Its detail does not recommend it for the real beginner, but for those who want to get to grips with one of the most fascinating and impassioned letters in the New Testament this is by far the best evangelical commentary available.