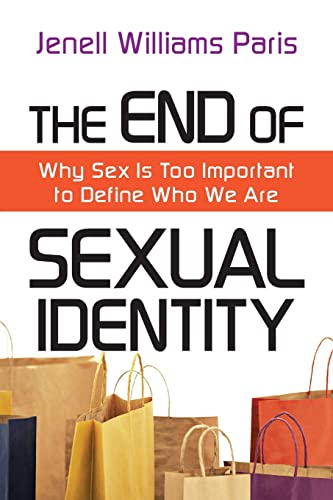 The End of Sexual Identity: Why Sex Is Too Important to Define Who We Are

Jenell Williams Paris calls for the end of sexual identity categories as a way to free to Christians to pursue sexual holiness together. She argues that the facile tendency of equating heterosexuality with holiness and homosexuality with sin keeps all of us from honest evaluations of the various, complicated, changing aspects of our sexuality.

Paris begins with Paul's warning that Christians not be conformed to the pattern of this world (Rom 12:1-2) and argues that sexual identity categories are recent linguistic constructions (i.e., patterns) that hinder our pursuits of sexual holiness, Christian unity, and the advancement of the gospel in the world. With the skills of an anthropologist, she walks readers through the evolution of these categories in Western history, comparing and contrasting Western patterns to contemporary non-Western cultures. Her goal is to open up space for a fresh evaluation of sexuality that does not privilege the heterosexual: “the journey toward sexual holiness is for all people . . . no one has a head start, especially by virtue of feelings they didn't even choose” (p. 9).

Paris's nuanced presentation of the complexities of sexuality and her call for understanding, patience, and grace might lead one to expect her to soften the traditional Christian sexual ethic, but she does not. “I'm a 'sex only within marriage between a man and a woman' kind of Christian” (p. 85). At the same time she insists that Christians not malign “those with whom we disagree. . . . [Q]uestioning the validity of their faith or salvation is counterproductive and damages the witness of our religion as a whole” (p. 85).

One of Paris's most helpful contributions is the analogy she draws between sexual identity labels and grocery bags. Both mask the diverse contents within. Obtaining an accurate portrait of an individual's sexual life requires looking past the label, inside the bag, in order to evaluate items such as “desire, fantasy, behaviors, relationships, memories, hopes, thoughts, health and marriage” (p. 80). Only then can one identify where healing, repentance, and growth toward sexual holiness are needed. Each area must be conformed to Christ by the power of the Holy Spirit (p. 87). This approach can serve as an equalizer, calling everyone to self-evaluation—”the wife with sexual desire for a man other than her husband” (p. 95), the homosexual, the pornography viewer, the sexually abusive, and other users of the sex trade (p. 85). None are exempt.

Paris's work focuses on realism—realism about the complexity of human sexuality and realism about sexual desire, the possibility of so-called “fulfillment,” and/or the ability to change desire. Drawing upon the important study conducted by Mark Yarhouse and Stanton Jones illustrating the low success rates of therapies to change same-sex attraction, she calls for more realistic expectations in the nature of pastoral care for those who identify as gay. But she is no less rigorous in exposing the unrealistic expectations that many heterosexuals have of sex and marriage. Like her pithy yet penetrating article, “The Truth about Sex” (Christianity Today 45:14 [November 12, 2001]: 62-64), The End of Sexual Identity continues to expose how Christians at times obscure difficult truths in their attempts to bolster traditional sexual ethics. In place of spin, Paris argues for honesty that makes room for grace:

Like sex itself, Jesus [has been made into] a consumer good. . . . “Just buy this, and the good life is yours.” A difficult marriage, challenging parenting or unhappy celibacy is beneficial for exposing this marketing strategy; the truth is that “buying” Jesus doesn't make life easy or perfect. The ease of one's celibacy (or marriage) is not necessarily an indicator of the quality of one's faith. Sexual struggle, whether in celibacy or marriage or nonmarital relationships, is not a problem to be stuffed away. If it's well cared for, sexual disappointment can become like the apostle Paul's 'thorn'—an enduring hardship that inspires a reliance upon grace (2 Corinthians 12:1-10). (p. 137)

In order to work toward sexual holiness after the end of sexual identity Paris recommends two shifts: from judgment to discernment and from cure to care.

In contrast to judgment that assesses a person's sexuality as good or bad, discernment honors the paradoxical way that blessing and suffering coexist in a holy life. Though sexual attractions and behaviors will never reach moral perfection, our sexual lives can be congruent with our spiritual lives, characterized by mercy, forgiveness, sin and restoration, love, joy, peace, patience, and self-control. (p. 107).

The move from cure to care draws upon the wisdom of Thomas Moore who argued that “cure implies the end of trouble. . . . But care has the sense of ongoing attention. . . . [W]hen the focus is on care instead of cure, sexuality can be acknowledged for what it really is: a valuable part of human life in which we embody conflicted desires, and through which we receive grace” (p. 109). Holiness, in sexuality as in every area of life, entails both “development and end,””crisis and process,” and includes both “blessing and suffering” (pp. 87-89).

While it is an admirable recommendation that Christians maintain our “differences within the body instead of lopping off the parts we find disagreeable,” some may consider her proposal unrealistic or too late. Denominations have already split. Lines in the sand have been drawn. Christians with broad swaths of common ground who disagree over sexual ethics find themselves alienated from one another, no longer working or worshiping together. The body is already divided.

On the other hand, those who endorse the drawing of lines will likely take issue with her assertion that “disagreements about same-sex sexuality are just differences, not divisions” (p. 144). These could easily turn her argument on its head, thus calling for Christians to be just as rigorous in weeding out sins like gossip and mean-spiritedness as they are sexual sin.

While the debate over church discipline will continue, it is clear that church division is problematic. Paris contributes to the kind of bridge-building Andrew Marin also models in his groundbreaking work, Love is an Orientation: Elevating the Conversation with the Gay Community (IVP, 2009). Both call for an identify shift from evangelical or gay to “children of God” (Marin, 106). Paris suggests, “If 'beloved' were the label on every bag, then identity would be secure, regardless of the items in the bag or their condition. Sexual desire may be simple, complicated, distorted or confused, and when desire is troubled, it is a very serious matter for the person experiencing it. But no matter the condition of our desire, the identity category is still 'beloved human being'” (p. 97).

Without sacrificing quality scholarship, Paris's writing is accessible. Her “tell-it-like-it-is” realism is tempered by good humor and grace. A useful text for courses in anthropology, ethics, ministry, sociology, and human sexuality, The End of Sexual Identity should be required reading for pastors, youth ministers, college students, educators, and seminarians.