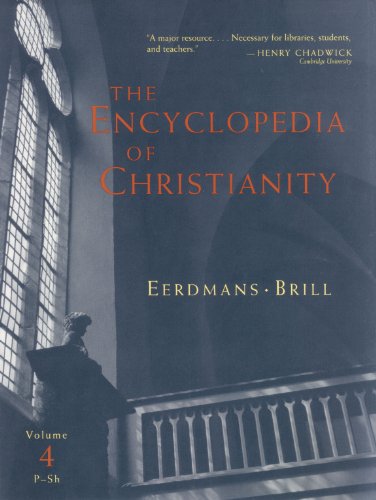 The Encyclopedia Of Christianity, Vol. 4, (P–Sh)

This is the fourth of the five-volume Encyclopedia of Christianity, which has established itself as a major reference work for a wide range of readers. Volume 4 continues to pursue the aim of presenting Christianity in its global, ecumenical, socio-cultural and historical contexts. As with previous volumes, a wide range of contributors has been assembled and, although the majority are German, many other countries are represented.

Volume 4 covers the spectrum from Pacific Conference of Churches to Shinto, and includes entries on, among others, Pelagianism, Pietism, Rahner, Quantum Theory, Reformation Principles, Russia, Scholasticism and Sex Education. Generally, subjects are treated comprehensively and from a sympathetic point of view. The entry on Sexism, for example, accepts the current politically correct understanding of the subject.

The part of the alphabet covered results in clusters of articles around significant themes. Thus we have Pastor, Pastoral Care and entries on several areas of such care. Similarly there is Philosophy, Philosophy and Theology, and specific types of philosophy such as Philosophy of Religion. An extensive article on Reformation covers Europe East and West in wide-ranging fashion, with a lengthy and up to date bibliography.

In regard to biblical studies, the perspective of previous volumes is again evident, with heavy reliance on the current consensus of critical scholarship. Deutero-Isaiah makes an appearance, whilst the Davidic authorship of any of the Psalms seems scarcely to be recognized as a possibility. The Sermon on the Mount owes much more to the evangelists than to the historical Jesus. Readers of earlier volumes will not be surprised.

Despite these criticisms, the encyclopedia is an indispensable reference work.