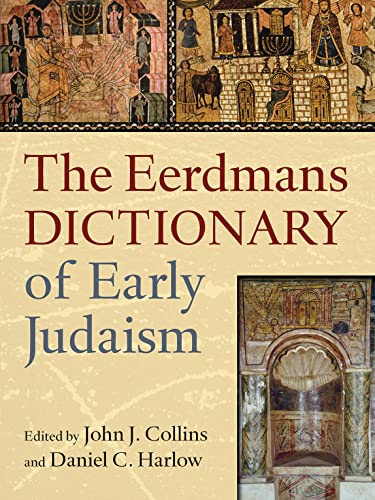 The Eerdmans Dictionary of Early Judaism

The Eerdmans Dictionary of Early Judaism is an indispensable resource for all students and scholars of early Judaism, NT, and early Christianity. The quality of the authors and articles, its remarkably comprehensive scope, the reader-friendly format and presentation of information, and its wide interaction with the relevant secondary literature are just a few of it its virtues. While the Dictionary of New Testament Background (eds. Craig A. Evans and Stanley E. Porter; Downers Grove: InterVarsity Press, 2000) certainly remains a valuable research tool, the Eerdmans dictionary has a few distinct advantages.

The work is divided into two sections. The first part (pp. 1–290) contains thirteen extensive essays devoted to broad synthetic discussions of significant aspects of early Judaism. Most of these essays are authored by scholars who have devoted significant portions of their career to the issue under consideration. Erich Gruen, for example, in “Judaism in the Diaspora” (pp. 77–96) demonstrates how Diaspora Jews “appropriated Hellenism to the goals of rewriting biblical narratives . . . [by] shaping the distinctive identity of Jews within the larger world of Hellenic culture” (p. 83). Diaspora Jews willfully and creatively participated in the social, cultural, and intellectual life of Hellenistic societies while simultaneously maintaining their Jewish identity and connection to the homeland. They were not haunted by disturbing images of exile (p. 92). James C. VanderKam, in “Judaism in the Land of Israel” (pp. 57–76), notes that the surviving evidence testifies to a richness and diversity of thought, practices, and beliefs within the Judaism of the Second Temple period, but that “there are fundamental beliefs and practices that would have been accepted by virtually all Jews during those centuries” (p. 73). James L. Kugel, in “Early Jewish Biblical Interpretation” (pp. 121–41), examines the way in which Scripture and its interpretation came to be an obsession of Jews during the period of Early Judaism, and notes that four assumptions pervaded Second Temple biblical exegesis: (1) biblical texts were cryptic; (2) the biblical message had contemporary relevance; (3) the diverse writings contained a single and unified message; and (4) Scripture was of a divine origin. An especially useful article is Loren T. Stuckenbruck’s “Apocrypha and Pseudepigrapha” (pp. 143–62), which examines the reception history of the creation of these terms as literary categories as well as their usage up until the time of the Reformation. Lawrence H. Schiffman, in “Early Judaism and Rabbinic Judaism,” notes that despite Pharisaic-rabbinic Judaism’s rejection of the apocalyptic trends of some of Early Judaism, there is evidence for numerous parallels and intellectual interaction between Second Temple works and rabbinic Judaism (e.g., disagreements over halakic tradition, similarities in biblical exegesis, and the importance of prayer and poetry).

The second section demonstrates the remarkable scope of the dictionary as it contains 520 articles devoted to, on my count, 28 topics. One will find, for example, the expected articles devoted to Jewish groups (e.g., Essenes, God-fearers, Levites, Pharisees, Priests, Rabbis, Sadducees) and articles covering the relevant literary texts from the Apocrypha, Pseudepigrapha, Hellenistic Judaism, Philo, Josephus, the Dead Sea Scrolls, and Rabbinic Literature. One finds numerous articles devoted to religious and theological beliefs such as Covenant, Dualism, Ethics, Exile, Faith, Resurrection, Righteousness/Justice, Son of Man, and Theodicy. Also included here, however, are articles devoted to the Hebrew Bible, the NT writings, Greek and Latin authors who comment on Judaism, and distinct versions and texts of the Hebrew Bible. Scholars will appreciate that the dictionary also includes numerous articles devoted to non-literary evidence. There are essays devoted, for example, to specific archaeological sites in or related to Israel (e.g., Mount Gerizim, Masada, and Qumran), essays on archaeological structures and artifacts (e.g., aqueducts, the Arch of Titus, Jewelry, Ossuaries, Papyri, and Pottery), and 37 essays on major cities and countries related to Judaism.

The comprehensive scope of the individual articles is astounding. Scholars will appreciate that the NT writings and early Christianity are not anachronistically divorced from the context of Early Judaism. Daniel C. Harlow’s essay “Early Judaism and Early Christianity” (pp. 257–78) examines, for example, the historical evidence the NT writings provide “for the wider Jewish world they inhabited” (p. 257). Likewise, dictionary entries on Jesus of Nazareth, the Jesus Movement, Paul, Jewish Christianity, and John the Baptist are welcome inclusions. The dictionary also includes numerous helpful maps and illustrations. An additional highlight of the dictionary is its inclusion of entries on major modern interpreters of Early Judaism such as Elias Bickerman, Martin Hengel, Jacob Neusner, E. P. Sanders, and Morton Smith and also a long essay by John J. Collins on “Early Judaism in Modern Scholarship” (pp. 1–23). As the names cited in this review indicate, the dictionary has truly encompassed the best scholars—and importantly includes many Jewish and international scholars—for the dictionary. The major limitations of all dictionaries are the brevity of the articles, and of course, this dictionary is no exception, but for an entry point into almost any topic related to Second Temple Judaism I can think of no better place than The Eerdmans Dictionary of Early Judaism.