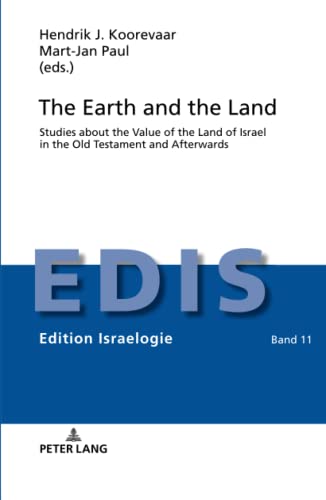 The Earth and the Land: Studies about the Value of the Land of Israel in the Old Testament and Afterwards

Debates concerning land possession in the Middle East draw upon the theological and biblical as much as the political and economic. For Jews and Christians alike, the texts of the Old Testament provide crucial data. Recognizing the very real tensions that exist in relation to Canaan/Palestine, the editors—Hendrik J. Koorevaar (Evangelische Theologische Faculteit, Leuven) and Mart-Jan Paul (Christelijke Hogeschool, Ede)—bring together contributions from twelve European scholars to determine what can, and cannot, be asserted about land from an Old Testament perspective, and how that textual heritage has been appropriated in Jewish, Christian, and Islamic theology. At the same time, the volume aims to be descriptive rather than prescriptive (p. 12). The driving concern is, “What is God’s purpose with the special location of Eden and of the land of Canaan for the rest of the earth and the people that live there?” (p. 15).

The bulk of The Earth and the Land consists of nine chapters which successively analyze the Old Testament material (pp. 25–273). Five chapters by Hendrik Koorevaar, Raymond R. Hausoul, Mart-Jan Paul, Siegbert Riecker, and Herbert H. Klement chart the language of “land/earth/place” in the Torah and Former Prophets. An essay by Hetty Lalleman considers data from the Latter Prophets. A further three chapters explore the Psalms (Julius Steinberg), wisdom literature (W. Creighton Marlowe), and the land in the time of the exile (Geert W. Lorein).

The following section then explores how these Old Testament perspectives have been adopted and modified by the three monotheistic religions that maintain a claim on the land of Canaan/Palestine.

Boris Paschke surveys the New Testament material. The key issue here is determining to what degree land remains valued, if at all. Are territorial promises to Israel spiritualized by early Christian texts? Or are they universalized? Paschke argues that the topic of “land” must be examined in conjunction with other significant spatial locales, specifically “Jerusalem” and “temple” (p. 279). By doing so, Paschke critiques simplistic iterations of so-called “replacement theology” in which the church replaces Israel and its institutions in toto. He draws attention to John 2, where Jesus even though speaking of his body as temple, still cleansed the temple building, testifying to its (albeit relativized) value (p. 284). Moreover, Paschke finds New Testament texts that ascribe considerable importance to the land (pp. 288–98). He concludes that “one should not spiritualize the land of Israel and the city and temple of Jerusalem too hastily” (p. 299).

The next chapter, by Heiko Wenzel, investigates perspectives on land found in Islamic sources. The goal of the essay is to guide readers in their understanding of Islamic assumptions and arguments with respect to place. Essential ideas include Allah’s universal claim of ownership over all lands and, importantly, the eventual transfer of those lands to the Muslim community (pp. 312–17). The impact of these theological assertions on Islamic thought is teased out with respect to the significance of Jerusalem (pp. 323–28) and the Hamas Charter (pp. 328–33). Intriguing, to this reviewer at least, is how much influence Islamic eschatology exerts on the discussion. Accordingly, Wenzel suggests Christians must realize the inherently different perspective that Islam has concerning history. There is a distinct chronology in play. Thus, regarding Canaan/Palestine, “once Islamic territory, always Islamic territory.… It can never be surrendered to non-Muslims” (p. 335).

In the section’s final chapter, Kees de Vreugd considers the modern State of Israel. The history of Zionism is charted (pp. 345–50) as a precursor for exploring various facets of Christian Zionism (pp. 354–63). De Vreugd is careful to separate Christian Zionism from dispensationalism, rightly noting that the two are not synonymous (p. 355). Here, the provenance of the volume comes to the fore as specifically European, theologically motivated support for Israel is investigated, nuancing what is frequently (and reductionistically) assumed to be a North American position. Indeed, de Vreugd argues from his Dutch perspective for the necessity of a Jewish state in God’s eschatological plans (pp. 370–71).

A summary chapter by Koorevaar and Paul draws together the essential findings of the volume. They conclude, based on the texts surveyed, that Israel is not entitled to the land, at least not yet: “Israel by means of the Zionist state has taken the land through usurpation because the rupture of the covenant is still working. There is, however, the perspective, that this usurpation will be changed into rightful ownership with the coming of the Anointed One in splendor, when Israel repents, in whole” (p. 398).

The Earth and the Land bears the marks of being a translated volume: not all chapters read as smoothly in English as others. Nevertheless, the book accomplishes its goal: a thorough survey of the key biblical material related to land. The volume thus admirably serves anyone wishing to track the importance of place, and especially Canaan/Palestine, across the canon. At the same time, the chapters by Paschke, Wenzel, and de Vreugd tellingly expose the hermeneutical forces that steer contemporary perspectives on the land to different outcomes. These chapters amply demonstrate that what one does with the data is as important as the data themselves. If nothing else, this realization ought to chasten over-zealous attitudes to land that claim more than is warranted. Profitable things may be said, but epistemological humility is crucial.