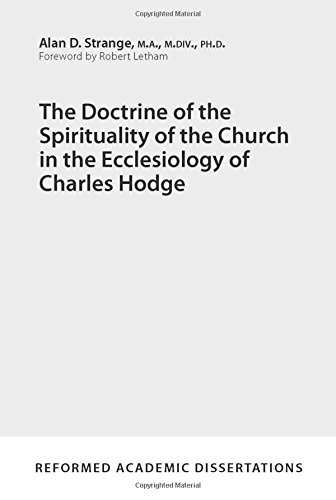 Written by Alan D. Strange Reviewed By A. T. B. McGowan
History and Historical Theology

This book is the published doctoral dissertation of Alan Strange, who is a professor of church history at Mid-America Reformed Seminary and a minister in the Orthodox Presbyterian Church. He completed his PhD at the University of Wales under the supervision of Robert Letham, who contributes the foreword to this volume.

The thesis of the book is that Charles Hodge of Princeton had a much more developed and nuanced understanding of the spirituality of the church than has often been recognized. In particular, he was able to use his understanding of the spirituality of the church to navigate his way through many of the most difficult debates of his day, especially slavery and the attitude towards the Southern church during and after the Civil War.

In the first chapter, Strange outlines the theological context of the study, namely the mid-nineteenth century debate on the spirituality of the church. This debate existed in the broader context of the discussion about the relationship between church and state. Strange explores the way that relationship was understood in biblical times, in the early church, and during the medieval period. He then focuses on the church and state debate at the time of the Reformation, paying particular attention to the English and Scottish churches, and the issue of religious establishment.

The second chapter deals with Hodge’s life and career. With a view to the overall thesis, this includes a discussion on Hodge’s politics and his views on slavery. Strange argues that Hodge’s commitment to Scottish Common Sense Realism was not so dominant in his thinking that he became a rationalist. Instead, he was prevented from this because he was first and foremost a man of the Bible, and it is to his interpretation of the Bible that we must turn to understand him best. With that in mind, chapters 3–4 take us through Hodge’s Systematic Theology, helping us to see how each main doctrinal section within the three volumes contributes to his developed understanding of the spirituality of the church.

It becomes evident that Hodge’s ecclesiology is not as clearly developed as his other doctrinal commitments. As Strange writes, “Hodge’s great three-volume Systematic Theology concludes without a developed ecclesiology” (p. 162). Based on a comment from A. A. Hodge, Strange says that Charles Hodge had wanted to write a fourth volume, focusing on ecclesiology, but health did not permit this. Nevertheless, what is not in doubt is Hodge’s conviction that “the church was in its essence invisible, the visible church being the necessary outward expression of the inward reality of the work of the Spirit” (p. xxiv). Strange makes it clear that Hodge’s “Achilles’ heel” is the way he plays down the significance of the visible church, and he compares Hodge’s view to Westminster Confession of Faith 25.2: “there is ordinarily no salvation outside the visible church” (p. 108). Strange argues that Hodge’s view of the Holy Spirit and the Spirit’s work in creating the church enabled him to avoid the worst implications of this neglect of the visible church.

In chapter 5, we come to the issue of slavery, which highlighted the clear differences between Reformed Presbyterian theologians on the spirituality of the church. Two of the participants in the debates were Charles Hodge in the North and James Henry Thornwell in the South. On the issue of slavery, Thornwell and others argued that, given the spirituality of the church, this was a political issue, and the church had no right to speak on the matter, not least because of the separation of church and state. Others argued that slavery was a moral issue and that the church must speak out in condemnation of it. Hodge argued that the church had no right to condemn slavery because the Scriptures do not condemn slavery, but it had every right to condemn other abuses and evil practices. Hodge’s position changed somewhat during his life, such that towards the end, he referred to slavery as a sin but not at this early stage. Strange takes us through the key decisions on slavery of the General Assemblies of 1818 and 1845 and explains how the different sides reacted to those decisions.

Chapters 6–7 are concerned with the debates within the Presbyterian Church regarding the Civil War and its aftermath. Strange takes us through these general assemblies in considerable detail, all to demonstrate how Hodge’s view of the spirituality of the church enabled him to take a clear and firm line. He was in favor of the Union and utterly against the secession of the Southern states, but his church and state views did not change through it all. Chapter 8 deals with the aftermath of the Civil War. Some within the Northern Presbyterian Church sought to prevent the re-entry to the church of those in the South unless they confessed that they were wrong to support slavery and wrong to engage in the Confederate “rebellion” against the Union. Hodge took a different view. He sought the unification of the Northern and Southern “Old School” Presbyterian churches on simple terms. When this did not happen, Hodge was deeply disappointed.

The issue of the spirituality of the church and whether or not it precludes comment on social and political affairs is a debate that has not gone away and Strange’s teasing out of the various arguments in the nineteenth century and especially his clear and thorough analysis of Hodge’s position will help people to engage in similar discussions today.

Like any dissertation, this is a comprehensive study that requires (but repays) many hours of careful reading. Some will find the detailed analysis of the discussions and decisions of various general assemblies somewhat tedious. But those who are willing to take the time and who have an interest in ecclesiology will find it a useful volume.