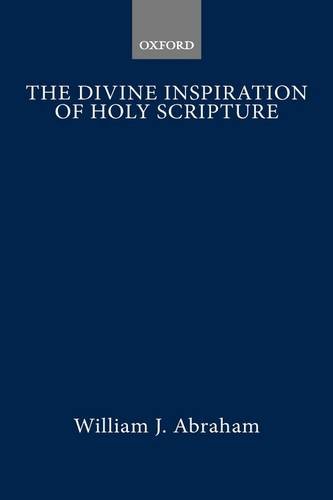 The Divine Inspiration of Holy Scripture

Dr Abraham writes as an evangelical who is dissatisfied with the conservative evangelical doctrine of Scripture as expounded by B. B. Warfield, J. I. Packer and others. He examines the weaknesses of this approach and of other non-evangelical approaches and offers his own doctrine of inspiration. His approach is eirenical and while he differs from Warfield and others he is respectful of them and seeks to be fair to them. But despite his good intentions, there is one vital flaw in his interpretation of the conservative evangelical position. At the same time, his own position suffers ironically from an excessive preoccupation with the concept of inspiration.

The attack on the conservative position comes especially in chapter 1. Dr Abraham argues that the doctrine of inerrancy is based not on explicit biblical teaching nor on the concepts of inspiration or of biblical authority (as conservatives claim) but on the now-discredited concept of dictation. While conservatives from Warfield on have (sincerely) disowned dictation theories of inspiration, they have continued to hold to the doctrine of inerrancy which was based on the dictation approach of earlier generations (as with L. Gaussen). Thus the Warfield tradition has failed to admit that it represents a considerable revision of earlier tradition (in its rejection of dictation and in the restriction of inerrancy to the original autographs) and has correspondingly failed to abandon the doctrine of inerrancy, which is logically based on dictation.

There are a number of weaknesses in this thesis. First, while Gaussen undoubtedly wrote much that sounds like a dictation theory, when he explicitly faced the question of human authorship his position was clear. The human writers were not merely ‘the pens, hands, and secretaries of the Holy Ghost’ and in most of the Bible we can clearly recognize ‘the individual character of the person who writes’ (Theopneustia (London, n.d.), p. 128). Dr Abraham falls into the error of isolating ‘dictation’ language from its wider context. Many older writers, like Calvin, could repeatedly state that Scripture was dictated by the Holy Spirit (e.g. Institutio IV. viii. 8f.) while elsewhere making it perfectly clear that they allowed a real and significant role to the human authors. As Dr Packer has observed, the dictation language referred to the results of inspiration, not the mode of inspiration.

Secondly, the alleged novelty of the Warfield position now fades. In denying dictation (as the mode of inspiration) Warfield was simply rejecting explicitly something which theologians in the mainstream Christian tradition had never held, although they had not always explicitly rejected it. Likewise, the appeal to the original autographs (which Dr Abraham cites as further proof of novelty) does not differ significantly from Augustine’s statement (echoed in others) that there are copyist’s errors in the extant manuscripts. The only novelty lies in the fact that Warfield, unlike earlier theologians, had to respond to the rise of textual criticism. Warfield’s ‘novelties’ were simply to state more forcefully and explicitly (because of new circumstances) what was already an established part of the theological tradition.

Thirdly, Dr Abraham’s argument proves not that inerrancy is based on a dictation theory of inspiration but that it is based on viewing Scripture as God’s Word in the sense that, as Warfield put it, what the Bible says God says. It is this principle, that the Bible is the word of the living God, that provides the major basis for inerrancy (or whatever other similar term one may care to use). Here lies Dr Abraham’s major error in his interpretation of the conservative doctrine. He fails to distinguish between dictation (the view that the human writers were mere scribes) and the traditional orthodox doctrine that they were true authors who nonetheless wrote exactly what God willed. While with both theories God can be called the author of Scripture and it is his Word, dictation makes him the sole author of an unmediated Word while the orthodox doctrine makes him the ultimate author of the genuine words of men which are his Word in a mediated sense. The major weakness of Dr Abraham’s own theory arises from this confusion. He builds not on the concept of God’s authorship of Scripture (which is a constantly recurring biblical theme) but on the concept of inspiration (which is barely mentioned in Scripture).

Finally, it is unfortunate that the conservative position is simply included under the heading of ‘The Deductive Approach’ and is then contrasted with ‘The Inductive Approach’ in chapter 2. Dr Abraham should have taken note of recent conservative evangelical literature which seeks to escape from the deductive versus inductive impasse by advocating an approach which embraces both (e.g. J. I. Packer, ‘Hermeneutics and Biblical Authority’, Themelios 1.1 (Autumn 1975), pp. 3–12). His presentation of the conservative position would then have been significantly different.

In the second chapter Dr Abraham points to the weaknesses of the inductive approach, as practised by William Sanday, H. Wheeler Robinson and James Barr.

In the third chapter he builds his own doctrine of inspiration. This is frankly disappointing. First, he abandons the important biblical theme of Scripture as the Word of God for the concept of inspiration. Secondly, he interprets the latter by analogy with the modern English use of the word in the secular context of human inspiration, ignoring the meaning of theopneustos and other Greek words in their biblical setting. He ends up with a doctrine of Scripture based on the concepts of revelation and inspiration but not on Scripture as God’s Word.

The fourth chapter is more rewarding in that it shows the inadequacy of viewing revelation purely as God’s action and defends the concept of God speaking. Unfortunately, however, Dr Abraham never gets beyond the concept of God speaking to (as opposed to through) the prophets and apostles. For him it is the writers that are inspired and he fails to come to grips with the biblical teaching that the writings are ‘inspired’.

In the fifth chapter Dr Abraham handles the biblical teaching on inspiration. This chapter is the most disappointing. First, in his interpretation of 2 Timothy 3:16 he completely ignores the word theopneustos with its sense of ‘God-breathed’. Secondly, he mocks Warfield’s claim that there is an avalanche of biblical passages teaching plenary inspiration. But his own discussion of the biblical material is very incomplete and ignores many of the passages cited by Warfield. The present writer would simply testify to the powerful effect made upon him by going through each book of the New Testament and noting down those passages relating to the nature of Scripture. Let the reader try this for himself and witness the avalanche first-hand. Thirdly, Dr Abraham’s account of the teaching of Jesus and the apostles on this subject is marked by an unhelpful vagueness and imprecision. He mainly confines himself to general observations and discussion of passages which appear to militate against Warfield’s view rather than facing up to the full force of Warfield’s case. Where he does discuss Warfield’s passages the argument is often weak. One class of passages is dismissed simply on the grounds that they appear to teach dictation (pp. 104f.). He quotes 1 Corinthians 7:10, 12, 25 as if Paul were denying that his own teaching was from God rather than stating that there was no teaching from Jesus on that particular matter. He notes how little the New Testament says about inspiration but fails to see that this questions his approach (based four-square upon the concept of inspiration) rather than the traditional doctrine. Those who have studied the New Testament material in its fulness and who are aware of Warfield’s case are unlikely to be impressed by this chapter.

While Dr Abraham has clearly sought to present a positive and evangelical, if not conservative, doctrine of Scripture, the outcome is sadly deficient. The most serious weakness lies in the author’s preoccupation with the concept of inspiration, interpreted in isolation from its biblical usage, and his neglect of the biblical concept of Scripture as the God-breathed Word of God. Related to this weakness is his seeming inability to distinguish between dictation as the mode of inspiration and the traditional orthodox doctrine that while the human writers are true authors they nonetheless wrote what God wanted so that the ensuing document is his Word. There is room for creative thought by evangelicals in this area but this book sadly points in the wrong direction.

The emergence of the doctrine of the incarnation

by Ernest Lucas
VIEW ALL VIEW ALL

God in Control, An Exposition of the Prophecies of Daniel

Paul the Apostle: The Triumph of God in Life and Thought