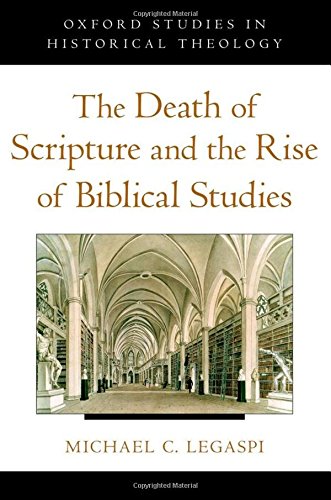 The Death of Scripture and the Rise of Biblical Studies

The seismic shift in the West’s popular and academic perspectives on the Bible over the last few centuries is easy to recognize and of great significance. This revised doctoral dissertation, rooted in research begun under Peter Machinist (Harvard Divinity School) and overseen by Ann Blair (Harvard University), approaches this complex process in a unique way by focusing on the life and writings of the relatively obscure (if undeservedly so) historical critic Johann David Michaelis (1717–1791). Legaspi’s work is one of several recent (and in this case self-acknowledged) revisionist accounts of this immensely important change.

Legaspi describes the shift he explores as one from a “scriptural Bible” to an “academic Bible,” with the latter having lost its status as (authoritative) Scripture. Rather than tie the origins of the demise of the “scriptural Bible” to the Enlightenment, as is often done, he attributes it to the crisis of epistemological authority engendered by the Protestant Reformation (p. viii). The center of his thesis is that eighteenth-century approaches to Scripture as a text like any other were not a rejection of a “scriptural Bible” (it was, he argues, already a thing of the past) but an effort to preserve its presence in a new cultural context (p. 9). “The academic Bible was created by scholars who saw that the scriptural Bible, embedded as it was in confessional particularities, was inimical to the socio-political project from which Enlightenment universities draw their purpose and support” (p. viii). Legaspi’s interpretation of the period and phenomena involved is thus focused on “social causes” rather than “intellectual antinomies” like the tension between faith and reason (p. ix).

The study falls into two parts, the first of which sketches the setting in which the “academic Bible” came to be, while the latter focuses on Michaelis’s contribution. Legaspi begins by arguing (following R. Popkin) that the Reformation undid the Bible’s authority. Chapter 2 turns to Göttingen’s development as a university in the eighteenth century, where the Bible (now “academic” rather than “scriptural”) was taken up as an object of philological, moral, aesthetic, and antiquarian interest (pp. 31–32). The university’s goals were “to avoid controversial ideologies, outmoded systems of thought, dogmatism, and extreme positions on either end of the theological spectrum” (p. 41). Accordingly, its various administrators and instructors (the author focuses on J. M. Gesner and C. G. Heyne) developed the institution’s overall orientation as empiricist in method and motivated by the “social utility” of the subjects of study and a desire for “irenicism” in its demeanor (p. 78).

Michaelis found this milieu congenial to his interests and aspirations, especially the use of philology to revivify the post-Reformation Bible (ch. 4, which provides helpful insights into the development of linguistics and biblical Hebrew), the use of literary aesthetics to appreciate biblical poetry in and of itself (ch. 5; Michaelis appreciated and applied Lowth’s technical approach to Hebrew poetry though he critiqued Lowth’s lack of attention to its historical background), and the use of such a method to create new ways to see biblical figures such as Moses (ch. 6). Interestingly, Michaelis judged Astruc’s embryonic source-criticism of the Pentateuch “exaggerated” and “conjectural” and argued for the Pentateuch’s coherence, but did so not for doctrinal or theological reasons but because he wanted to preserve Moses as an accessible source for humanistic inquiry (pp. 137–39).

A solid grasp of the Bible’s reception in the post-Reformation West treatment is indispensible to a solid understanding of how it is understood in contemporary Western culture and academia. In this regard Legaspi’s analysis adds much of value, particularly in exploring the convictions and motivations that lay behind Michaelis’s work. The work weaves together an arresting tapestry of highly detailed historical threads that is both informative and a pleasure to read. It is also deeply rooted in a tremendous variety of original sources and at ease in various academic disciplines and historical epochs. That said, this reviewer wishes that Legaspi had lingered longer over the correlation of social trends with individual values, understanding, and epistemology. Further exploration of why early Enlightenment thinkers were so readily convinced that the days of the scriptural Bible were over and were content to preserve it as a cultural artifact would also have been helpful.

Some of the antitheses that underlie aspects of the argument are questionable. It is not clear, for example, that only after the Reformation was the Bible explored “with reference to extrascriptural concepts, whether juridicially, as among Catholics, or doctrinally, as among Protestants” (p. 4; cf. the writings of Richard Muller, which are curiously lacking from the bibliography). There is surely significant continuity between Aquinas’s thought and later Catholicism, just as there is an abundance of doctrine that held a complex relation to Christian interpretation from the early Christian period onward.

Legaspi closes by documenting what he thinks is the dawning recognition that the historical aspect of biblical criticism is dispensable. The antithesis between faith and reason may not be as “stale” as Legaspi thinks, however, as the recent return of that very question at various levels of the Society of Biblical Literature suggests (see http://www.sbl-site.org/membership/farewell.aspx, accessed 16 February 2011). Indeed, when Legaspi suggests that those who created the academic Bible “preserved many traditional moral and religious forms (for example, the authority of the Bible) by restraining them critically and self-consciously, as historical contingencies amenable to new intellectual projects” (p. ix), he seems to mix the analytical factors that his project must keep separate if social factors are to predominate over ideological, theological, or epistemological ones. The degree to which this impressive work revises our understanding of the Bible’s varying fates in Western culture will in some part be determined by the course of subsequent history, but we are in Legaspi’s debt for adding significant depth to our understanding of the issues involved.