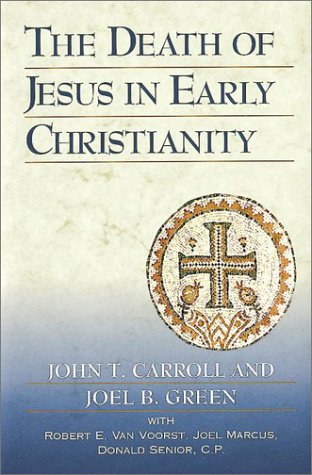 The Death of Jesus in Early Christianity

This valuable book on a critically important subject has a complex history. The original setting for some of the ideas and discussion was a study group within the Society of Biblical Literature on the subject of the Passion Narrative and Tradition in Early Christianity. The two primary collaborators wanted ‘to offer a cohesive statement developing a particular interpretive approach to the death of Jesus in early Christianity’. In order to do this they jointly wrote ten of the chapters, while asking the three other contributors to write one chapter each on a specialist topic. The book thus consists of an ‘introductory essay on The Gospels and the Death of Jesus in Recent Study’, followed by chapters on the death of Jesus in each of the four canonical gospels, one on Paul’s theology of the cross, another on Hebrews, 1 Peter and Revelation, and another (by van Voorst) on extra-canonical passion narratives. These discussions of biblical matters are then supplemented by five further essays on historical and theological issues: the historical meaning of the cross; the question of responsibility for the death of Jesus; the role of the OT in the passion narratives (by Marcus); the relationship between Jesus’ death and discipleship (by Senior), and a concluding discussion about the meaning of the atonement.

There is a wealth of material within this book for students and scholars in particular. In general the treatment is up-to-date and stimulating, although it is probably worth noting that different chapters have quite different levels of interaction with the scholarly literature. For example both authors have previously written on Luke; hence the sections devoted to Luke come fully documented, whereas other sections are much more sparsely annotated. We might also note that the focus is as much (sometimes more) on the passion and rejection of Jesus as specifically upon his death. Further we might suggest that the nature of the cohesive approach promised in the introduction is not always made sufficiently clear in the following chapters.

This book has numerous strengths. An appropriately broad range of material is dealt with and fairly sensible conclusions are generally reached. The discussions of the gospels in particular are helpfully informed by a wide range of narrative and literary approaches. This throws interesting light, for example, upon ‘his blood be upon us and upon our children’ (Matt. 27:25) which is taken as somewhat ironic: The death of Jesus—precisely because it is the shedding of innocent, sacrificial blood—creates the possibility of forgiveness even for the persons who bear responsibility for putting him to death’ (48). The historical discussion broadly supports the historicity of the main features of the gospel accounts: Jesus was condemned both by a Jewish court (because of his threat to the temple and priestly status) and by the Roman prefect.

The book also has some weaknesses. Leaving aside differences of opinion or conviction on a number of exegetical details, perhaps the most important issues arise out of the concluding attempt at theological synthesis. The attempt, of course, is to be applauded and the fourfold coordinates by which contemporary theological reflection can check its bearings are fair enough as far as they go: lostness, cruciform ethics, divine initiative in salvation, human equality. The problem seems to be that the previous chapters have not really provided sufficient ammunition for a convincing theological conclusion. For example, no attempt is made to investigate the OT covenantal and sacrificial motifs that cluster around NT approaches to Jesus’ death; nor are the theological factors behind penal substitution adequately addressed. Indeed penal substitution gets a rough ride here, although no indication is given that our authors have actually read any twentieth-century defence of this traditional doctrine.

I read this book with interest and found it to be both informative and stimulating, without in the final analysis finding it very satisfying. Further debate might profitably focus on just what aspect of the cross gives coherence to the richly multi-faceted contours of Paul’s thought, and on whether penal substitution can survive contemporary attacks. Perhaps some Themelios readers will take up these further challenges.