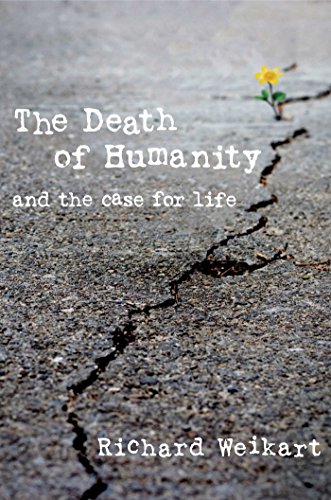 The Death of Humanity: And the Case for Life

Richard Weikart, who teaches history at California State University at Stanislaus, gave a fateful talk in 2011 to a campus group at his university. In his preparation, he was inspired by C. S. Lewis’s twin masterpieces, The Abolition of Man and That Hideous Strength. The focus of his lecture was the crusade among secular intellectuals, started centuries ago and now proceeding at a rapid clip, to radically devalue mankind from the God-crafted acme of creation to something along the lines of “mere complex matter.”

Weikart showed how, in the hands of modern thinkers who have great sway in contemporary scholarship and policy-making, humanity is no longer viewed as a sacred mirror of deity. Rather, man is now properly viewed as a mere animal sculpted by genes and environment, a machine driven by pleasures and oriented toward simple bodily perfection, a reinvention project of man himself.

Inspired by the enthusiastic response to his talk, he extended his research and crafted an entire book on the topic, and we are the beneficiaries. The Death of Humanity has delivered to our doorstep a mini-course on the modern intellectual history of this deadly movement—we might call it “the Demolition Crusade”—among intellectuals in the West to redefine downward the wonder and sacred value of humanity.

Rarely if ever have I read such a fiercely energetic yet rigorously academic book. Here we find the informational density of an encyclopedia, alongside the verve and periodic twists of a mystery novel, combined with the urgency of a biblical critique and manifesto for action.

Weikart’s 287-page mini-course is well organized, but it can be a bit overwhelming if taken in too fast. Ultimately, it is a thoroughly equipping experience for anyone who possesses a strong desire to understand our culture and to live out and defend the biblical worldview. This book should be priority reading for every pastor, campus worker, health giver and apologist and—in the ideal world—every college student who wants to think clearly about the Judeo-Christian case for humanity in the face of the ongoing Demolition Crusade. This is a story that everyone needs to know, and Christian leaders, alongside the rising generation of disciples, are among the few who (shocked awake by Dr. Weikart) will stand up and tell it.

It is a daunting task to retell this saga of the Demolition Crusade, which can be traced through diverse schools of thought and a virtual galaxy of thinkers over three centuries. Yet on the opening leg of Weikart’s tour, it dawned on me that he chose not to hold back in the breadth and depth of coverage. In fact, he spans the entire 300 years of the Crusade. Thus what is particularly astonishing is the chronological depth attempted: crusaders range from Enlightenment radicals such as La Mettrie, through August Comte and Charles Darwin in the 1800s, all the way to Peter Singer, Michel Foucault, and Jean Baudrillard in recent decades. In each case he avoids glib generalities; only rarely did I notice a move to oversimplify. The most forgivable slip is his unqualified reference to “Nietzsche’s rejection of morality” (p. 212) when referring to the writings of Foucault’s biographer. Technically, as the late Walter Kaufmann stressed in his celebrated course on Nietzsche I took at Princeton, the stated goal in The Antichrist was to introduce a “transvaluation of all values” based on a life-affirming ethic distinct from that of Christianity.

How does he manage this coverage? Wisely, he employed smart organizing and “story-telling” strategy that made an otherwise cumbersome mass of information manageable. Nearly every page is filled with flashes of insights, surprises, and touches of human pathos. I found myself frequently moved and sufficiently motivated that I started writing my own manifestoes on the margins of my pages.

Let me voice here my two main critiques of Weikart’s complex matrix of scholars and stories within the vast Crusade. Over and over, in spite of occasional mentions of which century we were in, I found myself wondering, “Where is this in the timeline? How much time has passed since the previous figure or story—a decade, or a century?” To be fair, Weikart does install in various places a number of chronological signposts, yet it seemed that such signage was often missing just at the spots where it was needed the most.

Second, there were places where a simplification or retranslation of obscure terms would have helped the reader, such as Charles Darwin’s quote (p. 67) where evil in nature counted heavily in his mind against his accepting the design argument. Weikart includes an excerpt of Darwin’s letter to a fellow naturalist, saying that he cannot persuade himself that “a beneficent and omnipotent God would have designedly created the Ichneumonidae with the express intention of their feeding within the living bodies of caterpillars.” It is a safe bet that 99% of readers, without an internet search, would have no idea what this unfamiliar word Ichneumonidae means, so the quote is a mixed bag at best. A simple insertion of [scorpion wasps] in the place of the unknown term would have solved the problem here completely.

With those critiques aired, it is time to assess not only what Weikart has accomplished, but also to note five shrewd moves that enabled him to do so with such élan.

The first and second moves are teaching master keys that go together, like threads woven together in a Scottish plaid: story-telling, coupled with effective critique of flawed concepts. This teaching approach is what makes Weikart’s Death of Humanity so accessible and compelling. He has honed the narrative/critique art to a fine edge, since each chapter develops story-with-critique with its own unique character. This is done with deft touch, whether it be major philosophers of yesteryear like Jeremy Bentham or current icons such as Peter Singer. The reader is factually grounded in the pleasure-focus of Bentham or the assumptions of Singer that man is best viewed as “animal-shaped-by-evolution.” Yet the story of their crusades is skillfully interwoven with critique. The fact-laden pages seem to turn themselves. I stopped counting at a dozen places where the crusaders against humanity’s sacredness had used self-refuting reasoning, as laid bare by Weikart.

Third, the book is smartly organized by themes and each chapter captures a major line of attack. I might have been tempted to put the book down after the second chapter if the account had gone chronologically. Rather than moving era-by-era, he traced the Crusade through themes that spring typically from Enlightenment figures (such as the “machine” metaphor), but then are traced as we are catapulted quickly into the nineteenth and twentieth centuries, following along the chosen theme.

Fourth, there is throughout the book a proper sense of what I call “deep-shock” to see what these secular thinkers have actually said in writing. Many of the vignettes and quotes from secular crusaders moved me, stopping me in my mental tracks. These shocks were hammer blows of reality—wake up calls that prompted me to jot my reaction and resolve on the margins of many pages.

One shock, from US Supreme Court jurist Oliver Wendell Holmes, Jr., was especially stunning. Holmes, in commenting on a recently published book he had read, said, “[I] think morality a sort of higher politeness, that stands between us and the ultimate fact—force…. Nor do I see how a believer in any kind of evolution can get a higher formula than organic fitness at the given moment” (Oliver Wendell Holmes, Jr. to Harold Laski, May 13, 1926, in Holmes-Laski Letters: The Correspondence of Mr. Justice Holmes and Harold J. Laski, 1916–1935, 2 vols., ed. Mark DeWolfe Howe [Cambridge: Harvard University Press, 1953], 2:837). Is it any wonder, then, that Holmes, holding such power as a jurist, was a pivotal figure in some of the most embarrassing moves in US history—moves designed to promote a new world of racial purity through eugenics and sterilization of the “unfit” among us?

Fifth and finally, the wake-up experience of Weikart leads out of a nightmarish web and in a positive direction. Both at the outset of the book, as well as throughout and in the conclusion, those holding to the sacredness of humanity are equipped with tools of criticism and are called to action. We are enabled to stand for the truth in a time of erosion and attack; we are called on to live the truth in love, at a time that “love” and “truth” are being hammered flat as meaningless constructs of a mankind that has faded from existence as a loving and truth-seeking being.

If there ever were an important, and woefully overlooked, side of the intellectual history of modern man, this is it: the crusade against the Judeo-Christian view of mankind as crafted brilliantly by God. Pascal’s balance here is so helpful: we are “noble” as God’s handiwork, but we are “wretched” in our sin and rebellion, which corrupts our ability to see the logical incoherence of our own ramblings. If Christians do not understand the three-century crusade to redefine our essence, then we will be ill-equipped to point the way back to the source of our sacredness. Weikart’s torch of truth beckons us to learn that way back and to point others to the ultimate purpose of humanity—the Way, Truth and Life for whom we were masterminded in the first place.