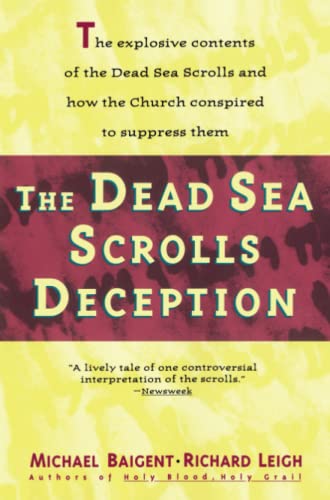 The questions Baigent and Leigh ask in the first part of the book have to do with the reticence of the scholars of the Qumran documents to publish more of their findings. Retelling the story of the finding of the scrolls, and their subsequent study, in very interesting detail, the authors give prominence to their belief that a plot was afoot from the beginning to monopolize study of the scrolls.

The contention that Father de Vaux’s team of international scholars became a ‘closed shop’ for the study of the manuscripts is a serious one. Serious divisions in the team of scholars, as well as a failure in the last 40 years to publish all the scrolls, must lead to questions regarding the status of current scholarship in Dead Sea Scroll research. While the historical details of this discussion make interesting reading, all evaluations by the authors must be re-examined in the light of the revolution in publication of the scrolls which has taken place since the autumn of 1991.

Baigent and Leigh offer satisfactory discussion on the Essenes and their possible identification with the Qumran community. The authors are correct to question such identification. The writers of antiquity—Josephus, Pliny and Philo—are so sketchy in their descriptions, and at times mutually contradictory in their assertions, that it is impossible to come to any firm conclusion as to who the Essenes were. And the Scrolls themselves give us no warrant to identify the Qumran community with them.

The book prefers to talk of ‘Essenism’ (along with Professor Black of St Andrews) as the description of a ‘widespread movement of anti-Jerusalem, anti-Pharisaic non-conformity of the period’ (p. 173). The Qumran community, it is alleged, is Essenic in character. So too, the authors contend, is Christianity, for it also began as a movement of ‘anti-Jerusalem, anti-Pharisaic non-conformity’. This was the equivalent of the ‘early church’ at Jerusalem, which centred around James, the brother of the Lord.

The basic, and most far-reaching, arguments of the book are based on this identification. Baigent and Leigh go on to examine the history of the Book of Acts and the role of James. They suggest that Acts is the story of the original Christians, led by James, coloured by a Pauline viewpoint. As such, we are told, Paul is always hero, James always villain.

The truth, however, according to Baigent and Leigh, was different: Paul (‘the first “Christian” heretic’) established the worship of Jesus as one of the many ‘dying and reviving’ gods of the Middle East. He apparently invented the virgin birth story and the ‘fact’ of resurrection. In all of this, Paul supposedly diverged from official Christian teaching at Jerusalem and established what was in effect a new religion, one ‘which came to have less and less to do with its supposed founder’ (p. 187).

The gradual establishment of Pauline thinking, so we are told, meant a diminishing of the influence and importance of James, the Lord’s brother. Paul identifies him as a leader of the early church (Gal. 2:9). Beyond this, little is known of his influence.

Baigent and Leigh lay great store by the researches of R.H. Eisenman, in order to fill out a picture of James, and to establish an alleged rift between James and Paul. A direct link is made with the Scrolls, which see the Teacher of Righteousness assailed both by a ‘Liar’, one who is first admitted into the community and then reneges on it (i.e. Paul), and by a ‘Wicked Priest’, identified as Ananas. Thus the Habbakuk Commentary in particular is seen as referring to the same accounts as are to be found in Acts, Josephus, and early Christian writers. The supposed theological polarization of Paul and James over the role of the law is to be understood in this general context.

Baigent and Leigh leave their greatest surprise till the end. They refer to those references to Paul’s Roman citizenship in the Book of Acts, and especially to Acts 21:30–31, where Paul, it is argued, was saved by the Romans from being killed by the Jews. This, we are told, clinches it. Paul was a Roman agent who, in return for close working with the powers of Rome, was given special protection, and a new identity. Paul is the first great historical supergrass!

This is the basic thesis of Baigent and Leigh, a thesis which takes us much further away from the Dead Sea Scrolls, into crucial questions concerning the origins and evolution of Christianity. In postulating a cleavage between James and Paul in this way, the authors are removing Christianity far from Jesus Christ, and far from the circle of the first apostles. Both dominical and apostolic authority for Christian tradition are taken away. This thesis is a direct challenge to evangelical scholarship of the biblical text. A detailed scholarly antithesis remains to be written which will refute many of the authors’ claims on exegetical and historical grounds.

In conclusion, it may be said that, apart from the obvious archaeological interest, the Scrolls are relevant to the evangelical study of the NT for three reasons.

First, the kind of religious lifestyle depicted in the columns of the Dead Sea Scrolls fills out the NT picture of first-century Pharisaism, from which Jesus dissented. How often does our Lord clash with religious zealots, such as occupied Qumran for a time? Professing to be the true generation of Israel, claiming to have Abraham as their father (cf. Jn. 8:33ff.) and building upon their own self-interested theology, these Jews are accused by our Lord of being like white-washed graves (Mt. 23:27)—beautifully kept, but full of corpses. The religious sect of Qumran was of this order. Far from furnishing evidence for identifying such a religious movement with primitive Christianity, the Scrolls depict the very opposite of what Christianity stood for.

Second, the Scrolls set in clear relief the vibrancy of Christian faith. Baigent and Leigh suggest that the so-called Christian faith that survived, invented by Paul as an amalgam of pagan religions by way of reprisal for his rejection by the leaders in Jerusalem, was far removed from Jesus Christ. But it is psychologically impossible to believe that the Christ of Paul is different from the Jesus of the synoptics. It is to be lamented that the thesis of Baigent and Leigh owes more to the neo-orthodox rejection of the supernatural as vital for Christian theology and faith than to the supposed discovery of the true meaning of the Scrolls.

Thirdly, Baigent and Leigh argue that the Scrolls destroy Jesus’ claim to uniqueness. This is quite untenable. The Dead Sea Scrolls cast light for us on the uniqueness of our Lord. While they introduce to us a Teacher of Righteousness, he is righteousness itself. His message and that of Qumran are quite distinct. He is still the Way, the Truth and the Life. These are concepts alien to the militaristic, quasi-religious community which once occupied the shores of the Dead Sea, and the deposit of whose religious beliefs and practices make for a fascinating study.