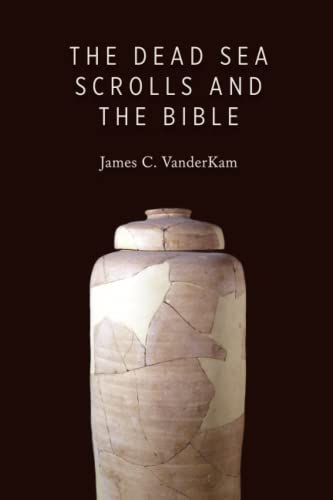 The Dead Sea Scrolls and the Bible

Most of this book originated as the Speaker’s Lectures at Oxford University in 2009 and seeks to provide “up-to-date, accessible overviews of major subjects in the area of the scrolls and the Bible.” The first chapter pertains to “The ‘Biblical’ Scrolls and Their Implications.” Here VanderKam surveys the manuscript copies of books that would become part of the Hebrew Bible. This includes the number of copies of respective books found among the caves as well as other Judean desert sites. In general, these finds provide the oldest original language evidence for many passages and indicate the care with which texts were transmitted in antiquity. Though they offer a very limited set of data, they are nonetheless important for providing Hebrew evidence for readings previously known only from other versions such as the Septuagint. The author reviews the “textual picture” through surveys of orthography, select textual variations, interpretative insertions, as well as new and expanded editions of biblical books attested among the scrolls. From this data VanderKam suggests that the documents attain a considerable degree of textual uniformity perhaps as early as the first century c.e. He then illustrates contributions the scrolls make for textual criticism of the Hebrew Bible.

Chapter two, “Commentary on Older Scripture in the Scrolls,” examines more explicit aspects of scriptural interpretation in the scrolls—cases in which the writers overtly explain the meaning of an older text or derive support from it. The natural presumption is that these older texts were thought by Qumran writers to have extraordinary value for their present concerns. VanderKam finds precedent in the Hebrew Bible itself, where later texts such as Jeremiah (Jer 26:18) cite earlier texts such as Micah (Mic 3:12). Similarly texts outside the Hebrew Bible found at Qumran (e.g., Jubilees, Aramaic Levi, and Enoch literature) provide exposition of texts from older works, both within the Hebrew Bible and without, in formal pesharim and other forms of interpretation. The natural conclusion is that scriptural works were available to the communities, were the “objects of intense scrutiny” (p. 47), and bore authority for the deepest concerns of the communities that study them.

The third chapter, “Authoritative Literature According to the Scrolls,” deals with the questions of which texts were authoritative works for the writers of Qumran scrolls, and how one can tell. Though VanderKam finds no clear evidence for a canon of Scripture in the strict sense of the term, he nonetheless finds evidence for a “core group of books on which all could agree . . . that was a functional collection of authoritative texts” (p. 55). He draws this conclusion from a set of criteria, including the attestation of a work in several copies and a clearly authoritative function among the corpus of scrolls. By the latter VanderKam looks for a clear attribution of a book’s contents to God, the employment of recognized citation formulas, and the existence of a commentary written on it. This would certainly include works like Isaiah, Deuteronomy, and a number of the Psalms, but also Psalms 154 and 155.

The fourth is the only chapter not presented as one of the Speaker’s Lectures. In “New Copies of Old Texts,” VanderKam focuses on works outside the Hebrew Bible that were known before the Qumran discoveries for which the caves yielded the earliest copies and in their original language. These include Jubilees, Aramaic Levi, the Book of the Giants, the Wisdom of Ben Sira, Tobit, Enoch (especially the Greek fragments from cave 7 that may contain fragments of the Epistle of Enoch), the Epistle of Jeremiah, and Psalms 151, 154, and 155. VanderKam concludes that all of these, with the possible exception of Psalm 154, were likely older works, copies of which were brought to Qumran at a later time. In this respect they indicate the people responsible for the scrolls inherited literature. For scholars they provide important textual data for inquiry of the works they preserve.

Long-standing debates about “Groups and Group Controversies in the Scrolls” are examined in chapter five, where VanderKam advocates an Essene authorship. He does so by saying the groups behind the texts are more similar to the Essenes than to any other fellowship about which the ancient writers report. Yet the authors do not identify themselves by that name, which is typical of them. Instead, VanderKam suggests their self-identification is found in the epithet “Doers of Torah” and similar expressions. Furthermore, the author finds clear references to Pharisees in the scrolls where, as in the NT, they fare rather poorly. Though reference to the Sadducees as such is less clear, VanderKam does find evidence for a “Sadducean” approach to the law attested in the scrolls.

The final two chapters relate to the Scrolls and the NT, specifically the Gospels (chapter six), the book of Acts, and the letters of Paul (chapter seven). Generally he finds the world of the scrolls to be vastly different from that of the NT in two key respects. First, whereas both the NT and the Scrolls are deeply concerned with fellowship among their adherents, NT people are eager to draw others into their fellowship and engage in intentional discipleship. Both are absent in the scrolls. Second, early Christianity was diverse, and the role of the law in it, especially in Paul, differs considerably from the scrolls. Nevertheless, the scrolls offer important “backlighting on the New Testament” (p. 120). They provide independent primary source evidence for messianism in first century Palestine, as well as scriptural interpretation, legal disputes, and community life. Furthermore, the scrolls exhibit profound parallels with the opening chapters of Acts on matters such as community goods and reflection on Moses at Mt. Sinai. They also offer some important points of comparison with Paul’s interpretation of Scripture and his notion of “works of the law” (e.g., 4QMMT), among other matters. Overall, the writers of the NT “worked in a world in which the ideas found most clearly in the scrolls enjoyed a wide accessibility. Those ideas they at times combated and at others adopted in the service of their proclamation of Jesus the Messiah” (p. 166).

The value of this work is in its stated purpose to summarize the most recent discussion in a highly accessible manner. It is not comprehensive in its scope nor does it break new ground. In this regard one familiar with a work such as VanderKam’s Dead Sea Scrolls Today (2nd ed.; Grand Rapids: Eerdmans, 2010) would stand to gain the most by the present work. Yet with characteristic caution and clarity of expression, VanderKam enlightens readers of ground most recently tilled in scholarly discourse.