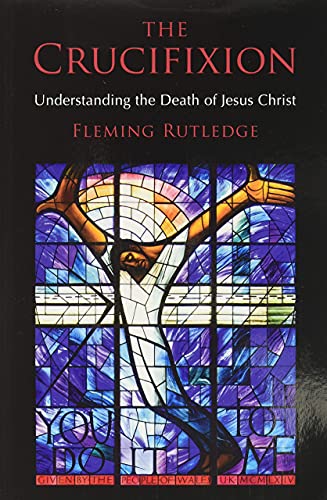 The Crucifixion: Understanding the Death of Jesus

In 1977, Fleming Rutledge became one of the first women ordained to the priesthood in the Episcopal church. Although she has not held a tenure-track teaching position, her academic credentials are noteworthy as well: two fellowships at the Center for Theological Inquiry in Princeton, a residency at Wycliffe College, Toronto, a stint as visiting scholar at the American Academy in Rome, and a dozen or so books.

Rutledge divides her book in two parts. The first addresses the crucifixion specifically. Here Rutledge emphasizes the prominence of the crucifixion in the Gospels, the peculiarity of crucifixion itself—it matters not only that he died, but how—and, accordingly, the specific horrors of it, morally and physically. She explores the “non-religious” character of crucifixion, the detestable strangeness of it, and the “godlessness” of it, memorably calling the crucifixion “the most secular, irreligious happening ever to find its way into the arena of faith” (p. 54).

The first part also includes a chapter on Anselm, whose legacy is addressed at various times throughout the book. In sum, Rutledge defends substitution but not penal substitution—in fact she finds little biblical support for punishment as a feature of the atonement at all. Rutledge argues that the penal substitutionary model of “Late Reformed Scholasticism” (namely, Charles Hodge) is rationalistic and biblically narrow (p. 488). Anselm’s rationalistic manner, Rutledge suspects, may have led to such rigidity.

Noteworthy in this first part are three things. First, Rutledge compellingly reconsiders the crucifixion and of its shame, ugliness, and moral significance. Second, she astutely characterizes contemporary evangelicalism’s numbness to the manner, and thus the meaning, of Christ’s death as a form of Gnosticism in which God’s power to save is eclipsed by “our capacity for being redeemed” (p. 51 n. 23, emphasis original). Third, Rutledge’s take on Paul’s understanding of sin as “not something that one commits” but rather “a power by which one is held helplessly in thrall” is of particular interest (p. 101).

Rutledge says in the preface that “it is the living significance of the death of Jesus, not the factual details concerning it as a historical event, that matters” (p. xvii, emphasis original), and this is borne out in part 2, “The Biblical Motifs,” which comprise roughly two-thirds of the book. Rutledge here makes good on her claim that the many atonement theories, and the many biblical themes and images which are fulfilled in the crucifixion, ought not to be thought in competition but should be allowed in concert to enrich our understanding of Christ. Thus, the many generic descriptions of Rutledge’s understanding of New Testament fulfillment of the Old Testament, in hermeneutical terms, resonate with evangelical exegetical and biblical theological sensitivities, though her views of the historicity and authority of Scripture, and of Satan, hell, and eschatology, ought to draw scrutiny from evangelical readers.

According to Rutledge, Satan and hell are artefacts of a New Testament cosmology now metaphysically irrelevant. (The absence of hell in Paul helps to explain away its appearances in the Gospels.). As far as the reality or true nature of these things (metaphysics), we must remain agnostic, at best. We should nonetheless revive such terms and symbols in order to preach the gospel in an age now facing evils which have outdone the available moral grammar. Truly there are no words for the evil we have seen; so, Rutledge argues that the crucifixion, and the full lexicon of biblical imagery which exposits it, provides that vocabulary. Evil, she says, is morally (and metaphysically) unintelligible: “there is no explanation” (p. 443). Therefore, she argues, myths and symbols are both necessary and necessarily non-real. The fall, too, is morally informative “myth” (p. 419 n. 65).

She says, putting this into practice, that “we may not demonize other human groups, but it is sometimes necessary to demonize something” (p. 438). In the Barmen Declaration, for example, Karl Barth resisted “demonic powers,” and in the same way, for contemporary readers, “[a] sense of the principalities and powers is necessary for discerning what the enemy is up to” (p. 417). The book is peppered with such applications of cruci-centric metaphor to present-day evils, from hate crimes to genocide. In my view, this is a mixed bag. Indeed, evangelicalism has still to sort out its view of the relationship between the gospel and a keen socio-political eye for injustice. Still, Rutledge’s emphasis on the physical suffering of Jesus on the cross (in part 1) and the mechanics and politics of crucifixion in first-century Palestine—themes which she admits are absent from the text of Scripture—indicates a curious hermeneutical move in which the death of Christ is interpreted as the fulfillment of extrabiblical themes. In this sense, Rutledge does not offer biblical theological reflections on the church organism and political participation, but tests a hermeneutical anomaly vulnerable to politicization of the gospel.

For Rutledge, the familiar notion of hell should be eclipsed by a deeper understanding of the crucifixion as Christ’s victory over Sin (Rutledge uses upper case “S”), understood as a subjugating power opposed to God’s good intentions for creation. The humiliation of Christ is so profound, and his victory so complete, that the eternal persistence of enmity against God is inconceivable. Rutledge reads Pauline justification in this way, too, as final rectification, restoration of a moral order consistent with Augustinian ontology: God the self-existent good, who has no opposite, and all that he has made. There is no eternal state of the reprobate.

The reader may understand, then, why Rutledge claims that in Romans 11:15, “Paul strongly hints at the redemptive activity of God among unbelievers even beyond the grave” (p. 408). Or why she says that “the Jacob-Esau dichotomy therefore becomes no dichotomy at all, but a summation of God’s dealings with the entire human race in its twinned identity—simultaneously both reprobate and elect” (p. 607). Universal atonement in one place is unambiguously affirmed (p. 610), even though she says elsewhere that “many a preacher can testify that the good news of Jesus Christ frequently falls on deaf ears” (p. 606 n. 60).

Rutledge is careful, at many points, not to succumb to the politicization of redemptive language, but her hermeneutics and metaphysical reluctance may signal vulnerability to humanistic permutations of biblical ethics. She has acute concern for the preaching of the cross of Christ according to the Scriptures; indeed, her concern for the purity of the church is unambiguous and she is a sharp critic of cultural blind spots and indefensible conveniences. But what all this means, the reader learns, is a political posture of the church institution, along with hermeneutical and doctrinal adjustments, rather conspicuously inharmonious with conservative evangelicalism. Rutledge’s theology is too often unlike and in too many places adverse to the gospel of historic Protestantism not to be read with a more critical eye.