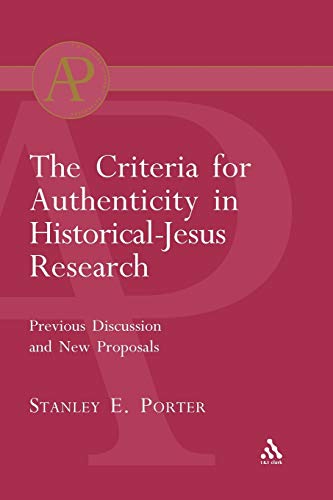 The Criteria for Authenticity in Historical-Jesus Research: Previous Discussion and New Proposals (JSNTSup. 191)

Stanley Porter, Professor in the University of Surrey, Roehampton, has established himself as one of the most prolific New Testament scholars in the world today. This book, his first extended foray into historical Jesus research, is divided into two quite different parts, one offering a detailed survey of the debate and the second presenting Porter’s own contribution. Both parts sub-divide into three chapters.

Chapter 1 thoroughly reviews the ‘three quests’ of the historical Jesus, including the period that Tom Wright dubbed ‘no quest’. Porter argues that there is more continuity than discontinuity among all these periods and that it is better to speak of one single, multi-faceted quest throughout. Chapter 2 diachronically surveys the development of the criteria of authenticity, again stressing the continuities among the contributions, especially with respect to ‘double dissimilarity’. Chapter 3 treats ‘recent developments’ in the criteria, specifically, John Meier’s more ‘maximalist’ use of the criteria of embarrassment and of a necessary cause for Jesus’ rejection and execution and Gerd Theissen’s four-part criterion of historical plausibility.

The second half of Porter’s book begins with a chapter on his newly proposed criterion of Greek language and context. Here Porter reviews recent research, including his own, that makes it probable that Jesus knew and occasionally spoke in Greek. He identifies seven passages in particular where this proves likely (Matt. 8:5–13 par.; Mark 2:13–14 pars; 7:25–30 pars; 8:22–30 pars; 12:13–17 pars; 15:2–5 pars; and John 4:4–26). He concedes that this criterion is not so much one of authenticity as of background, and in an excursus he engages Maurice Casey’s critique of his earlier work on Jesus’ probable use of Greek. The second new criterion, presented in chapter 5, is labelled ‘textual variance’. Here Porter argues that of the passages in which Jesus probably spoke Greek, those that show the fewest textual variants are the most likely to be authentic. A final chapter introduces the criterion of discourse features: if words of Jesus significantly differ from the surrounding Gospel contexts in consistent patterns, authenticity becomes probable. Porter illustrates with an extended treatment of Mark 13 in the light of the standard studies of Markan style.

Part One of this volume provides a very helpful overview and synthesis of a massive amount of scholarship, with lengthy footnotes of documentation. It is certainly true that previous historians of the quests have overly schematised the phases of research, as historians of any broad topic invariably must. But it is not clear that Porter has recognised several significant differences between most of the second and third ‘questers’—particularly the dramatic shifts from a latent anti-Semitism to strong ‘political correctness’ and from a preoccupation with the words of Jesus to a discussion of his deeds, aims and intentions in more holistic analyses. Certainly the dissimilarity criterion remained a constant throughout the twentieth-century thought, while Theissen has broken fresh ground with what Tom Wright has called the criterion of double similarity and dissimilarity. In fact, Wright’s development of this criterion seems even more significant than Theissen’s, though, curiously, Porter does not discuss it.

It is unclear how far Porter’s three new criteria will take us. The first, by his own admission, is not really a criterion of authenticity; the second, only applicable to the tiny handful of passages where Jesus likely spoke in Greek. Nor do I see any necessary correlation between the authenticity of an oral saying and the carefulness of its preservation in written transmission. I agree that the final criterion proves the most promising, but since space prohibits Paul from supplying all but one initial application, it is hard to determine just how promising it is. Perhaps his next book in this area (and he does promise us more writing on the topic) could focus solely on the criterion of discourse features with a broad cross-section of applications from the Gospels.