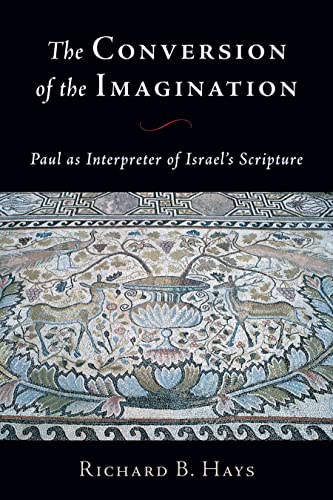 THE CONVERSION OF THE IMAGINATION: PAUL AS INTERPRETER OF ISRAEL’S SCRIPTURE

Richard Hays has been one of the premier Pauline interpreters of the last two decades, ever since the publication of his groundbreaking work The Faith of Jesus Christ in 1983. That work represented a new approach to coming to grips with Paul’s use of the OT that went beyond merely seeing Paul as proof-texting, but rather utilizing the narrative substructure of the story of Israel and of the God of Israel. On this view, Paul is not merely looking for verses to quote from Scripture to buttress his doctrinal point or ethical instruction, but his doctrinal and practical logic (if it is even appropriate to make such a distinction) is also shaped and configured by the deeper and more foundational narrative(s) of Scripture itself. Hays first sought to demonstrate this in Galatians, with the publication of his doctoral thesis, and has continued to work out this broader project of Paul’s use of the OT in a number of subsequent publications, including his Echoes of Scripture in the Letters of Paul, published in 1989.

The present volume is a collection of a number of publications from the last two decades or so that further elucidate this project. As such, the book provides an excellent introduction into the way of reading Paul for which Hays has argued over his career. Included in this volume is also a chapter that consists of a presentation given by Hays at a Society of Biblical Literature meeting in which Hays answered critics of his book Echoes of Scripture.

Another high point of the volume is the inclusion of a final chapter entitled ‘The Hermeneutics of Trust’ in which Hays answers those who seek to foster a hermeneutics of suspicion. This is a powerful call to read Scripture with genuine faith. Hays sets his discussion against the practice of the hermeneutics of suspicion in which Scripture stands under the judgement of the interpreter who seeks to identify the various manipulative and violent agendas at work in the text. Hays sympathizes with the sources of this impulse, admitting that there have indeed been sinful and coercive manners in which humanity has operated, but also notes the awful position in which this leaves interpreters. How is it possible, given such a stance, to actually hear the word of the Lord? Does not one simply get stuck in always doing literary criticism, identifying one prejudice after another without ever actually doing interpretation? In response to this, Hays outlines a hermeneutic of trust, whereby interpreters of the Bible seek to faithfully and humbly hear the word of the Lord, standing before Scripture with open hands and obedient hearts.