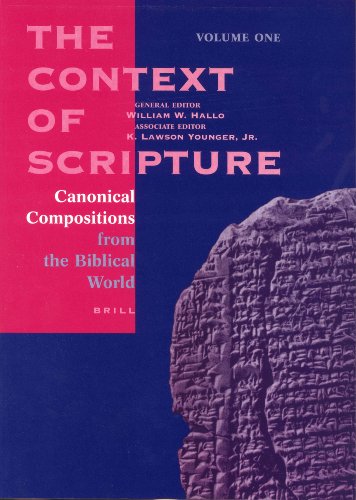 The Context of Scripture. Volume I: Canonical Compositions from the Biblical World.

This volume forms the first in a series of three that will reproduce in translation many of the important texts from the ancient Near East that are relevant to the study of the OT. The three volumes contain three different groups of texts: canonical compositions, monumental inscriptions, and archival documents. Although it is not always clear how these distinctions are made, the first volume contains many familiar texts written in Egyptian, Hittite, West Semitic languages, Akkadian, and Sumerian. Each of these language groupings is further divided according to whether the texts presented have a divine, royal, or individual focus. Harry A. Hoffner, Jr. provided assistance on the Hittite material and Robert K. Ritner helped with the Egyptian texts. The two editors, Hallo and Younger, deserve our gratitude for all the work that they have done.

Each text is presented with an introduction that often discusses the type of literature and the physical context of where the text occurs. A translation follows. These are usually done by experts in the relevant field. A reading of the translations suggests that they are generally reliable. This has two types of notes attached to it. There are footnotes that deal with questions of text and translation. There is also a centre column on each page in which relevant biblical references are cited for purposes of comparison with words or expressions in the text. Many different translators worked on the texts included. Indeed, some translations are borrowed from previously published works. There is wide variation in the length and detail of the introduction, footnotes, and the centre column Bible references. Some texts have little or no reference to comparative biblical materials. Nevertheless, the overall impression is one of considerable advancement on J.B. Pritchard’s Ancient Near Eastern Texts Relating to the Old Testament. Part of the reason is that because most translations have been made more recently and the selection of texts reflects the 1990s rather than the 1960s. The substantial inclusion of Hittite material is a welcome innovation. In addition, much greater attention is given to the notes and to possible biblical parallels.

It is a pleasure to discover many of the important West Semitic texts included in this volume, such as the Ugaritic myth, ritual, epic, and rephaim texts. Recently published material from Emar is also found here as well as Idrimi’s biography, the Hittite instruction texts, and the Hymn to Aten. Even the Prayer of Nabonidus from the Qumran scrolls finds a place. Many of the significant texts found in Pritchard’s volume occur once again in this volume. Texts such as the legal collections of the second millennium BC do not appear although they may appear in the second volume since (in at least some cases) they can be understood as monumental inscriptions. However, one wonders whether the numerous recent texts, both cuneiform and alphabetic, found in biblical sites such as Aphek, Hebron, Hazor, Beth Shan, Dan, and Ekron, will make it into the following volumes. The Dan and Ekron texts might because they are monumental inscriptions, but the others are isolated letters and administrative texts; neither archives nor monuments.

However, this is an important achievement and it should provide the twenty first century with an updated equivalent of Pritchard’s volume. Like its predecessor, the three volume set will likely be too expensive for the average student or even teacher and one may hope for an abridgement that will make many of these texts more accessible to others who wish to study the ancient world of the OT. The volume itself should find a place in all libraries where the study of the Bible as a serious pursuit is encouraged.