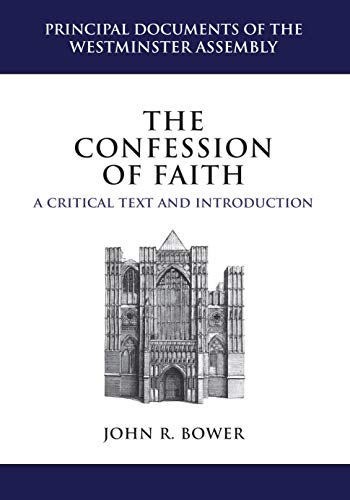 The Confession of Faith: A Critical Text and Introduction

Since Chad Van Dixhoorn edited The Minutes and Papers of the Westminster Assembly (Oxford: Oxford University Press, 2012), many have wished to glean from the rich deposit of scholarly insight available but have found the five volumes and their 3,200 pages unapproachable (or the $1,215 price tag prohibitive). For them, John R. Bower’s newest volume for the Principal Documents of the Westminster Assembly is a much-welcomed addition. The Confession of Faith: A Critical Text and Introduction presents readers with a modern critical edition of the Westminster Assembly’s Confession and fresh insights into the document’s sources and editing. Bower provides 192 pages of scholarly introduction that narrate the process by which the “Learned and Godly” divines debated, compromised, and maneuvered during the tense period from 1643 to 1649 (p. 3).

Chapter 1 recounts the Assembly’s original mandate to revise the Church of England’s Thirty-Nine Articles in a path more amenable to Parliament’s Puritan agenda. But after only a few months of revising the articles, Parliament interrupted the work and ordered an “entirely new documentary foundation” to unite the national churches of England, Scotland, and Ireland (p. 4). Chapter 2 describes the period between when the revision of the Thirty-Nine Articles was halted, and the work on the Confession of Faith began in 1645. It was then the Westminster Assembly produced the Directory for Public Worship, which briefly replaced the Book of Common Prayer in the Church of England and Scottish Kirk, as well as a new Directory for Church Government. Bower notes the “awkward position” this unintentionally caused ministers, who needed to fence the Lord’s Supper without clear dogmatic standards to enforce. This dilemma forced the Assembly to produce a skeleton doctrinal formula until they could complete the full confession (p. 32). Bower also provides background on the Reformed confessional tradition that supported the work to create a new multinational Reformed confession. Bower demonstrates how the work relied heavily on John Legat’s Harmony of Confessions and the Irish Articles.

Chapters 3–6 treat, respectively, the Confession of Faith’s four main sections: The Plan of Redemption (WCF 1–9), the Application of Redemption (WCF 10–19), the Parameters of Service (WCF 20–24), and Serving the Church (WCF 25–33). These chapters provide the book’s primary value, condensing a treasury of research from Minutes and Papers. Bower provides the reader concise summaries of the Assembly’s drafting and revision process for each section. Readers will find it illuminating—and at times surprising—to learn which chapters and sections were passed with little fuss, what language was (or wasn’t) debated, for how long, and by whom. Concluding the introductory portion, chapter 7 discusses how the manuscript of the Confession was transcribed, approved, printed, and distributed. Chapters 8 and 9 give a brief methodological overview for the critical text which follows.

The center of the volume is a critical text of the Confession of Faith that should become the standard for years to come. After the critical text, Bower includes several illuminating side-by-side textual comparison tables. Following is a comparison of four texts: 1646p (Edition 1), which only includes the first 19 chapters, the Braye manuscript, 1646 (Edition 2), and 1647 (Edition 3). Next, we find a table comparing the order of the Westminster Confession with the Irish Articles, which serve as the closest predecessor. The volume concludes with the halted revisions of the Thirty-Nine Articles that launched the Assembly’s project.

The research provided in this accessible and affordable volume will benefit anyone interested in the development of Reformed Confessionalism, seventeenth-century Puritan history, and Reformed Orthodoxy. For many, The Confession of Faith will provide a handy reference volume to consult. The lack of an abbreviations page seems to be a minor fault. Instead, the footnotes rely on the “hereafter abbreviated as” device, so non-specialist readers who dip in and out will have to hunt down the first instance. The margins are also annoyingly narrow for note-takers, and a timeline would have helped some of the chronology redirects. These quibbles aside, for those interested in learning how one of the most significant confessional texts in the English language was created, or those looking to have the new standard reference text, this volume (as for the rest in this ongoing series) deserves a place on your shelf.