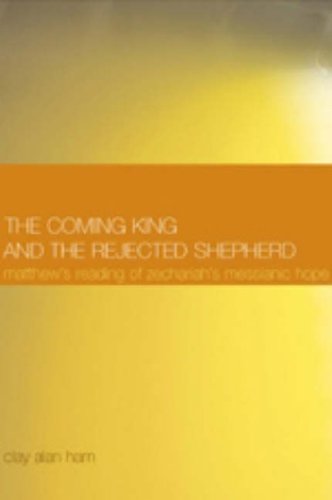 The second full chapter (‘The Allusions to Zechariah in Matthew’s Gospel’) considers the eight occasions, at least, in which Matthew alludes to Zechariah’s prophecies (23:35; 24:30, 31, 36; 25:31; 26:15, 28, 56). Again, Ham’s grasp of the ot context to inform his reading of the allusions is of decisive importance. The final substantive chapter (‘The Theological Use of Zechariah in Matthew’s Gospel’) is the most important and ‘describes the thematic and theological function of Matthew’s use of Zechariah’ (107), portraying ‘Zechariah’s predominant messianic image, the shepherd-king, an image which is most influential on the use of Zechariah in the gospels in general and in Matthew in particular’ (106–107). The work also contains a Conclusion, Bibliography, and Indices of References and of Authors.

Lacking in this volume is a degree of depth, particularly in the author’s critical interaction on areas such as Christology and methodology in the first Gospel. Indeed, that Matthew had the context of the Zechariah citations in view to inform his theology is assumed rather than argued. The work could have been further improved had Ham suggested research which could build upon his own. Yet this book remains a well-balanced and methodologically sound analysis of a neglected subject. Recent research on the use of the ot in the Synoptic Gospels has focused on the study of Isaianic influence. Ham helpfully shows us that there is a broader prophetic tradition, particularly that of Zechariah, that has greatly influenced Matthew’s understanding and portrayal of Jesus. His work is not bogged down in text forms so that the reader is unable to see the theological forest through the textual trees. Instead, it is a sound and judicious treatment of its subject that offers particular insight into how the ot context of a citation influences nt pericopae.

Finally, a brief note is due about the publisher. Sheffield Phoenix Press (www.sheffieldphoenix.com) is a new publisher aspiring to follow in the tradition of excellence formerly found in Sheffield Academic Press. Initiated by the Department of Biblical Studies of the University of Sheffield, its nt volumes are edited by Dr Stanley E. Porter of McMaster Divinity College. I look forward to seeing what else they produce and hope to see Sheffield Phoenix live up to the standards of its predecessor.