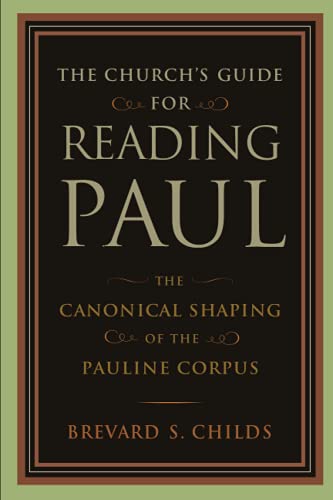 The Church’s Guide for Reading Paul: The Canonical Shaping of the Pauline Corpus

In this posthumous volume, Brevard Childs applies his well-known canonical model to the Pauline corpus. After setting the stage by rehearsing major trends in the study of the Pauline epistles, Childs suggests how his own model can be applied to these letters. In short, he applies to the “canonical Paul” a modified version of Martin Kähler’s distinction between Historie as an objective record of events “as they happened” and Geschichte as the “New Testament’s witness to Jesus Christ” (p. 12).

By giving special attention to Romans and the Pastoral Epistles, Childs argues that a proper reading of the Pauline letters will focus on the “canonical shaping” of the corpus. Childs defines this “canonical shaping” as the process by which the church gathered the letters of Paul, ordered them, and interpreted them. On the basis of this shape, the church can interpret the letters as they now stand in the canon. Thus, “Paul’s message has been extended and given a new form from its initial reception as it was assigned a new function within the Pauline corpus” (p. 75). In particular, Romans became the introduction to the corpus, the Pastorals, the conclusion, and the rest of the letters, a witness to the development and outworking of Pauline theology. As a parallel to common discussion about the historical and canonical Jesus, with the canonical shaping of the Pauline epistles, their Historie and particularity are ultimately subsumed in the church’s reading of them in light of their Geschichte and canonicity.

Childs devotes most of the book to a series of “exegetical probes” into the Pauline epistles. In this exercise, he examines eight major texts and/or themes: apostleship, Abraham, the Spirit, the community gifts and worship, the church offices, the weak and strong, Romans 9–11, and the apocalyptic shape of Paul’s theology. He then concludes with a brief discussion of the “canonical frame” of the Pauline corpus, i.e., Luke-Acts and Hebrews, and a short summary of his argument.

In order to illustrate his “exegetical probing,” we will highlight Childs’s discussion of church offices. In his discussion of the development of these offices, Childs focuses on the Pastorals. After outlining the debate between Ernst Käsemann, who insisted on a strong distinction between the Pauline charismatic leadership and the calcified structures of the Pastorals, and Heinrich Schlier, who argued for a strong continuity between the historical Paul and the Pastorals, Childs applies his own model to the debate. Not surprisingly, he argues that we need not accept either extreme; rather, we must read the Pastorals as part of the Pauline corpus in its new canonical context. Thus, among other roles, “the Pastorals do not function as a substitution of Paul, much less of his rival, but like John the Baptist, they serve as a pointer to the real source of continuing revelation, to the Scriptures, to Paul, and to the rest of the New Testament’s evangelical proclamation” (166).

By way of evaluation, there is much to commend about Childs’s approach. First, he attempts to deal seriously with the whole of the Pauline corpus and the NT for that matter. He does not simply relegate the “pseudo-Paulines” to the dustbin of scholarly study. Similarly, Childs is not satisfied with the fragmented historical critical approach that ruled NT scholarship for so long. Also, we can commend Childs for his desire to deal seriously with the concerns of the church, both ancient and modern. He respects the process of canonization and the millennia-old role of the twenty-seven books of the NT.

When turning to more critical assessments, we can first note that much has been written elsewhere about Childs’s approach and method (see Richard Schultz, “Brevard S. Childs’ Contribution to Old Testament Interpretation: An Evangelical Appreciation and Assessment,” Princeton Theological Review 14 [2008]: 69–93). Therefore, we need not enter into much detail concerning the methodological critiques of the canonical approach. However, it is important to mention that perhaps the most significant weakness of Childs’s method is his embrace of Kähler’s method. Given the NT’s explicit appeals to what could be classified as Historie by Kähler, it is difficult to accept his distinction between Historie and Geschichte on any significant level.

As it relates more directly to Pauline studies, this same critique must also be applied. If we must, as Childs suggests, distinguish the historical Paul from the canonical Paul, then we lose a significant ground upon which Paul built his authority. On more than one occasion, he appeals to the facts of history to support his authority and arguments (see, for example, 1 Cor 15:3–11; Gal 1:11–2:10). Without such grounds in place, Paul’s arguments lose much of their authority. Moreover, Childs’s use of the Pastorals is particularly problematic and seems to be inconsistent with his approach. It is unclear to me how a consistent canonical reader can both take the canonical message of the Pastorals seriously and simultaneously consider them “a pointer to the real source of continuing revelation, to the Scriptures, to Paul, and to the rest of the New Testament’s evangelical proclamation.”

If one cannot make a case for the historical reliability of the Pauline letters, and not simply on the basis of Geschichte, then it seems that a significant argument for their authority is lost. In short, while Childs’s approach continues to be a valuable and stimulating method for biblical studies, at the end of the day, it does not seem to be the only or best guide for the church to read Paul.