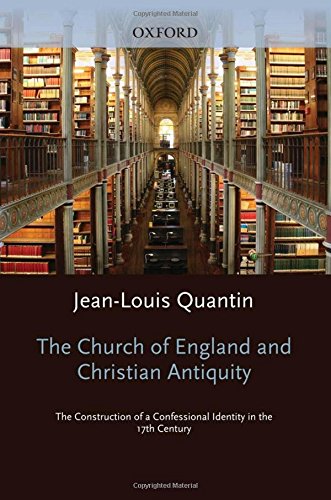 The Church of England and Christian Antiquity: The Construction of a Confessional Identity in the 17th Century

The relationship between Scripture and tradition remains of primary importance to every Christian believer and Prof. Quantin of the Sorbonne, Paris has produced a formidable guide to showing how this relationship manifested itself in the construction of a particular confessional community, that of the Church of England. Elizabethan divines are shown to be very much part of a wider international Reformed community, indeed, their conceptual framework, “for all subsequent assertions of Anglican singularity, was virtually indistinguishable from continental Reformed orthodoxy” (p. 87). They utilised the Church Fathers primarily to refute the Roman Catholic charges of novelty, but refused to confer too much authority on to tradition. The Fathers’ role was thus seen to be that of helpful guides and useful interpreters of Scripture, but with no intrinsic authority. Restoration divines would later argue that tradition established the Canon of Scripture, something strongly objected to in classical Protestant theology. English Protestants were very aware that doctrines of individual illumination could easily lead to Anabaptist excesses, but this had to be balanced against Rome’s veneration of tradition as authoritative. Protestants would point out that the Fathers themselves stressed the differences between their writings and Scripture and not many would believe the Fathers on millenarianism and the necessity of infants’ receiving Holy Communion. Protestants could therefore employ a nuanced and selective utilisation of the Fathers when it suited them. For example, Augustine was heavily quoted on grace, but quietly ignored on issues such as baptismal regeneration.

Quantin is correct in often pointing out the polemical and controversial nature of sixteenth-century theology when all sides quoted the Fathers, simply because in the context of these debates, no recognised authority could be left unchallenged. The received hermeneutical tradition of interpreting the Fathers meant that many of the Fathers’ errors could be excused in terms of distinguishing when they spoke in heat, rhetorically, and when they spoke dogmatically. Many Protestants simply saw this as dishonest evasion and special pleading for clearly erroneous views.

The seminal figure of Richard Hooker is viewed from a broadly Protestant perspective, but his historical sense was a real advance. He based his case against the Puritans more on the continuity of the Church, rather than on antiquity per se. It was only in avant-garde thinkers of the late seventeenth century that reference to antiquity came to prominence and a confessional identity distinct from that of Rome and continental Reformed theology appeared. An “Anglican” identity could thus be seen to emerge, though the term is still anachronistic before the nineteenth century. Quantin warns that advocates of patristic authority could be found within the various confessional strands within the Church of England and therefore generalisations about use of the Fathers should be avoided.

Quantin resolutely and deftly demolishes Anglo-Catholic perspectives, which seek to discern an “Anglican” mindset or approach to the Fathers and erroneously seek a deep reverence for antiquity in Elizabethan times which never was. Middleton’s 2001 work Fathers and Anglicans comes in for particular criticism: “a compendium of Anglo-Catholic historiographical commonplaces. It has a wholly unhistorical conception” (p. 7). Such isolationist or exceptionalist approaches, which seek to study the Church of England divorced from wider continental streams of thought, are soundly rebutted. (In fairness, Quantin is also scathing of more evangelical authors such as Atkinson’s 1997 work on Hooker [p. 93]). Throughout this impressive work le professeur is admirably direct in his opinions (e.g., “a fantastic misinterpretation of the evidence” [p. 214]; “irritatingly judgemental” [p. 248]) and is always willing to call a spade a spade, or, as the French say, appeler un chat un chat.

Quantin’s formidable reading, both in terms of breadth and depth, of the primary sources allows him to trace the convoluted evolution of approaches to the Fathers in the English Church. The French Calvinist Jean Daillé’s Use of the Fathers becomes a touchstone of Protestant orthodoxy, or as the author puts it, “a doctrinal litmus test” (p. 327). Firmly within the context of continental Reformed theology, Daillé showed that the consensus of the Fathers was a pernicious myth and something which Protestants must resist to be faithful to the Bible. (In 1603 a synod of French Calvinists would go so far as to ban preachers from quoting the Fathers.) Later, more radical thinkers in England would begin to view the Fathers as essential in understanding the beliefs and practice of the Early Church. Then the theory emerged that as miracles had ceased and charisms had been withdrawn, the only reliable guide remained the exploration of ancient texts, especially those of the Ante-Nicene era. English patristic studies thus took on vital importance in guiding the contemporary church, though there was much debate as to the limits of the patristic period and to which Fathers were assigned particular prominence. Quantin is right to point out the correlative of this tendency to promote patristic learning—an unhelpful concentration of theological thinking in a highly-educated and detached elite. It also highlights the pervasive humanist impulse to uncover the fundamentals of Christianity from pure sources and purge the later accretions and unscriptural additions.

Readers of this volume cannot help but be impressed at Quantin’s mastery of the sources and prodigious multi-lingual reading around the subject. All too often studies of Church of England scholarship and theological development have betrayed an Anglo-Saxon bias and not sought a wider pan-European perspective. Quantin’s contribution to the field is most welcome, and scholars will find many good things in a five-page chronology, seventy-page bibliography, and comprehensive twenty-two-page index. OUP is to be congratulated on publishing such a formidable and well-produced piece of research, and although the expensive price tag will put this book out of the reach of most, it is well worth consulting in college or seminary libraries.