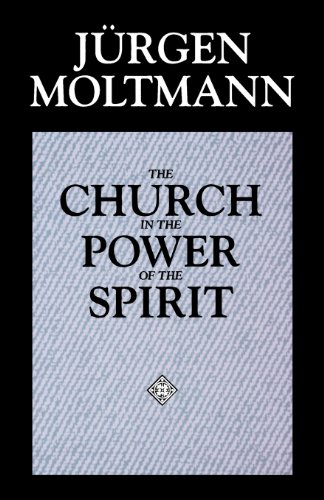 The Church in the Power of the Spirit

The final volume in a trilogy by Jürgen Moltmann has now appeared. It was preceded by The Theology of Hope and then The Crucified God. Those who have appreciated the earlier works will be eager to study the latest one. In many respects it is a synthesis of much of his earlier work generally, and is intended to clarify and amplify the significance of liberation theology for ecclesiology, what he identifies as ‘messianic ecclesiology’. It would serve admirably, therefore, as an introduction to his thought. In any event it is required reading for the student of ecclesiology and pneumatology as well as those interested in liberation theology. The book’s usefulness is facilitated by the fine translation by Margaret Kohl. Where tested against the German, Moltmann’s deceptively simple and nearly aphoristic style has been respected.

Moltmann theologizes from a perspective thoroughly immersed in and engaged with the world environment. He gives pride of place to the unfolding logic of human process. While he does not allow the significance of theological ideas to be limited in accordance with the history of their impact on humanity, he is very sensitive to the ways in which that history has in fact hidden the significance of the impact of numerous theological ideas. His particular gift is displayed in the skill with which he identifies such instances of ‘hiddenness’ and the structures which have combined to conceal them. These structures themselves provide him with important cues for reappraising even the ideas in question, particularly in as much as they suggest improved ways of relating these ideas in the future so that their true significance is more manifest. Thus liberation theology also involves the liberation of theology.

In all this Moltmann reveals his profound indebtedness philosophically to existential phenomenology. Theological ideas must be approached in terms of the authentic shape of concrete human experience in which they find expression. The Spirit is to be known by the role he assumes in human community. The history of the Spirit reveals normative patterns of his activity, which disclose themselves to be concerned characteristically with promoting normative patterns of response to the claims of Christ. The driving impulse of Moltmann’s critique is New Testament eschatology wherein the God who makes all things new offers Christ and Spirit for the freedom of humankind. Ecclesiology is the expression of divine activity relating Christ and Spirit to creation. The task of formulating an ecclesiology consists of specifying how the church can maximize the possibilities and varieties of the Spirit’s activity through human responsiveness, and hence live in the Spirit’s power.

The Church in the Power of the Spirit contains a number of insights of the quality one has come to expect from Moltmann. Of definite interest to many will be the eschatological justification he presents of the aesthetic dimensions of ritual behaviour for the family of God. Also, his discussion of the church and Judaism merits the closest attention. It was gratifying for me, coming from a Dutch Calvinist background, to discover, much to my surprise, that the Church Order of 1949 for the Dutch Reformed Church represents the first major decision on this question and distinguishes the nature of the dialogue which ought to obtain between church and synagogue from mission to non-Judaism. Obviously the vindication of Jesus as Israel’s Messiah cannot be compromised, but this distinction does seem to do more justice to the early mission strategy of the New Testament, and Romans 9–11 in particular. Moltmann’s consideration of the church in Latin America as a source of challenge for the church in industrialized countries is equally salutary.

However, at least one serious contradiction occurs when Moltmann turns to examine the relationship which ought to obtain between Christianity and non-Judaistic religions. He seems to suppose that since God’s liberating grace can be felt throughout the world irrespective of religious faith, the liberation from sin and evil through Jesus Christ need not occupy the prior position in Christian mission. Similarly, he exhorts the church to ‘learn’ from non-Judeo-Christian religions, like the vision of the sovereign God celebrated by Islam or the solidarity with material and biological creation celebrated by ‘animists’, whereas of course a careful study of the whole counsel of God in Scripture would demonstrate that both such tendencies are supposed to characterize humanity as re-born in the image of God’s Son. I claim that it is possible to be authentically ‘open’ to the other without succumbing to the temptation to imagine that the redemptive grace given for regeneration in Christ can ever come except by repentance and faith in him.

Moreover, Moltmann is quite persuasive that Christianity in the West has fallen into decadence, and he calls this ‘western’ Christianity. How then can it be reassuring to encourage indigenous ‘Asian’, ‘African’, and ‘Latin’ forms of Christianity to emerge unless the temptation to assimilate culturally is overcome better by these churches than it was in the ‘West’? This must have considerable consequence for inter-religious communication. Moltmann has largely avoided this problem. Christian faith, like any non-syncretistic religion, is inherently exclusive, since it is either accepted or rejected. But the burden for its exclusivity does not rest with those who believe but with those who reject. There must be conflict over the question of religious decision. The burden which rests upon the Christian from any country consists of making certain that the possibilities of conflict be minimized in accordance with Christ’s law of love, and that wherever conflict does arise it is because the claims of Christ are being rejected, and not for any reason of attitude or conduct. To accept the liberation of Jesus Christ provides one with no grounds for spiritual arrogance or triumphalism. For those who do not reject Christ the marvel consists exactly in his inclusive relationship with humanity. It is the marvel of the God who has made us all one.

Towards a biblical view of universalism

‘Shall you not surely die?’

by Edwin A. Blum
VIEW ALL VIEW ALL

A History of Early Christian Doctrine before the Council of Nicaea

Marx and the Bible

Reviewed by Martin Goldsmith
Philosophy
VIEW ALL VIEW ALL