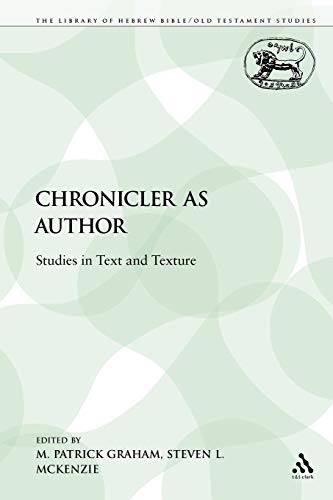 The Chronicler as Author: Studies in Text and Texture (JSOTSup. 263)

Although The Chronicler as Author is a sequel to The Chronicler as Historian, its subtitle gives the title an important spin, and a number of the essays later in the volume adopt reading techniques that preclude examination of authorial intent or method.

Kai Peltonen’s mammoth opening essay examines the three main approaches taken historically to whether the Chronicler had sources: only unknown sources; both known and unknown sources; effectively only known sources. Now, apparently, we know less than ever about the Chronicler’s extra-biblical sources. Steven McKenzie advances strong reasons for supposing that 1 Esdras was composed with the prior knowledge of Ezra-Nehemiah. He then offers a robust critique of Graeme Auld’s view that common material in Samuel-Kings and in Chronicles results from the use of a common source in both. To this Auld gives an equally robust reply, modifying some of his earlier published positions. Rodney Duke examines the rhetorical means by which the Chronicler sought to motivate his audience to follow Yahweh through the legitimate cult at Jerusalem. John Wright looks at the underlying structure of the story (fabula) of Chronicles. William Schniedewind argues that the Chronicler (not the author of 1 Chronicles 1–9) produced his work when not only was the Pentateuch considered authoritative, but also there was a ‘significant body of oral traditions and legal precedents’ (178) around it, which the Chronicler developed further. Gary Knoppers watches wealth go in and out of the treasury, contrasting the pictures in Chronicles and Kings. The Chronicler portrays the delving of a monarch into temple treasuries to ward off a foreign invasion as ‘a sign of abject weakness and moral turpitude’ (201), a loser’s strategy. Ehud Ben Zvi looks at the words of Huram, the Queen of Sheba, Sennacherib, Neco, and Cyrus, the five foreigners given voice in Chronicles. All but Sennacherib, who is there to promote his opposite, are presented positively and are somewhat ‘Israelized’. Armin Siedlecki considers the unclear boundary between Israel and the nations. Howard Wallace argues that when treating psalms the Chronicler manages to give them a new meaning with relatively small changes. James Trotter looks at how readers in the Persian period might have understood 1 Chronicles 10, seeming to think that it is easier to reconstruct how an ancient reader might have read than how an ancient author might have intended a text to be read. Christine Mitchell follows techniques of reading developed by Mikhail Bakhtin and Yuri Lotman and looks at 1 Chronicles 10:1–11:9 in terms of its literary logic both with and without reference to the parallel text in Samuel. Kirsten Nielsen argues that the psalm in 1 Chronicles 16 is possessed in a way precluding exclusive ownership by David, by the Levites who sang it, and by the reader. Noel Bailey examines and finds moral fault with 1 Chronicles 21. Roland Boer maintains that 2 Chronicles 10–13 represent a utopian view of space and politics. Magnar Kartveit’s is the most historical of all the essays, arguing that 2 Chronicles 36:21 is a later insertion to the text.