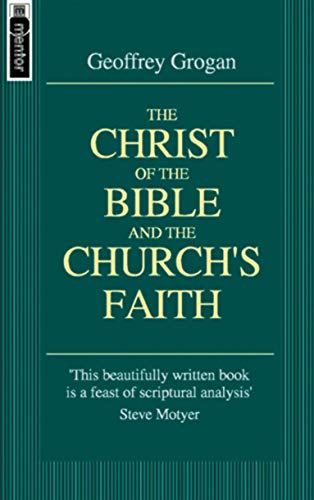 The Christ of the Bible and the Church’s Faith

This book is wonderfully written. It is a cogent example of biblical scholarship operating as the handmaiden of the Church. Geoffrey Grogan has produced a fascinating study in an innovative way. The odd number chapters are largely apologetic material, whereas the evens are focussed on theological issues. Thus for example, chapter 1 looks at Jesus in the Gospels, and chapter two at the historical reliability of the biblical material. It is clear that both chapters dovetail together and should, in the reviewer’s opinion, be read and interacted with together. The pattern is repeated throughout the book.

Grogan has been able to rehearse the history of Jesus research in a readable way, and as such readers will find it helpful for reminding them just where scholars such as Weiss and Schweitzer fit into the NT studies gallery. Grogan’s book exhudes a gentle courtesy. This comes across when he discusses scholars he disagrees with—see for instance his discussion of Bultmann (73–77). While readers will quickly find Grogan’s critique, all will be impressed by his even handed arguments. This is something sadly lacking in academic scholarship today. The book therefore could be used as a model of how to dialogue without rancour. The present reviewer would thank Geoffrey Grogan wholeheartedly for this.

Another positive feature of the book is that Grogan does not duck the hard questions. While mindful of his apologetic purpose he does not sidestep influential scholars. Thus when discussing Christology he mentions the work of James Dunn and gives a little critical appraisal (79–80). The only possible drawback is that he does not always cover everything he would like to in sufficient detail, but this is not the book’s aim.

It is not a book that confines itself only to the furrow of NT studies. Grogan includes a chapter on the Creeds and one on interfaith dialogue. The book is therefore an example of biblical scholarship in its richest sense. The NT scholar and biblical theologian will want it on the shelves as a reminder of our apologetic calling. As an Anglican Ordinand. I will want to give it to my peers, and after ordination it will be distributed to those in leadership with me.

Geoffrey Grogan has done us a great service in producing this book. More importantly, it is a book that points us to Christ. Buy it, read it, and pass it on!