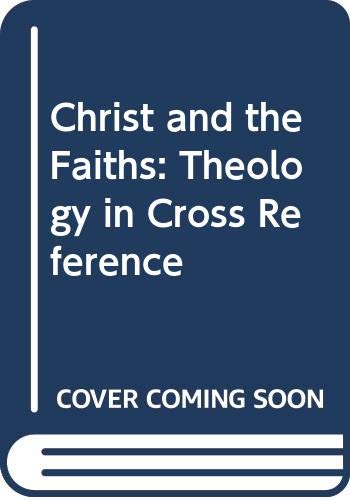 The Christ and the Faiths: theology in cross-reference

It is clear that the relationship of Christ and Christianity to other faiths is a key contemporary debate for theology as well as for missiology. We therefore welcome this further contribution from the erudite pen of Kenneth Cragg, coming as he does with a profound understanding particularly of Islam and the Jewish world. Although he has clearly done his homework on Hinduism and Buddhism, the reader will detect slightly less empathy in those contexts, especially with Buddhism in its Theravada form. He does, however, see Mahayana Buddhism as an alleviation of the almost vacuous irrelevance and emptiness of Theravada belief in anatta, anicca and dukkha as the bases of philosophy and life.

Dr Cragg is not directly addressing the burning theological issues of revelation and salvation outside the Judaeo-Christian history, but his book is rather attempting to see vital points of inter-relationship and possible areas for significant debate between Christianity and Islam, Judaism, Hinduism and Buddhism. Nevertheless, this book constantly raises questions on those issues of salvation and revelation extra ecclesiam, although Dr Cragg does not give neat or simplistic answers. Actually it is not only his theological stand which is not always completely clear, but also his literary style which is brilliant but far from lucid.

Dr Cragg is concerned that we often function within a closed circle whereby our faiths can only be understood from within. He aims to pinpoint areas where possibilities of cross-reference exist—and succeeds with stimulating freshness.

With regard to Islam, his three chapters relate to the topics of Creation and Theodicy, Revelation, Zeal for God and God’s zeal towards us. As in his previous writings he again highlights the power-consciousness of Islam in contrast to the cross-centred faith of the gospel. He also shows the implied emphasis on created man’s dignity and freedom to respond to or reject the sovereign demands of Allah. Allahu Akbar always claims man’s acceptance and submission; these can never be assumed. Revelation likewise must include man’s participation and therefore there can be no static Way. This particularly relates to Islamic and Christian ideas on prophethood. Is the prophet merely a passive channel of God’s word? Or does the prophet not only participate in the conveying of the message, but actually incarnate in his life the reality of the word? Naturally this must lead on to the person of Jesus Christ as prophet and Word incarnate. Cragg suggests that perhaps a true Muslim concept of prophethood is not in fact as far removed from the Christian understanding of the person of Jesus Christ as it may at first seem.

When it comes to interaction with Jews, Cragg poses some key questions. What sort of Messiah is expected? So who is the Messiah? Is he somehow similar to Shabbetai Zvi? Can Jesus really be the Messiah when the world remains in its unredeemed nature? And inevitably Cragg brings the holocaust to the fore, as must be done whenever Christians debate with Jews. It was good to see that he evidently feels with us Jews the horrific significance of the holocaust. But strangely, Cragg does not mention any possible relationship between Jewish messianic expectations and the Christian hope of the second coming of Jesus. And he falls into the usual Gentile Christian error of omitting all mention of Jewish Christians today. It is strange how Gentile Christians always seem to assume that Jews today cannot be Christians. Even in ecumenical dialogue between Jews and Christians, Jewish believers in Jesus as Messiah are hardly ever invited to participate. It is high time that the church took notice of the growing number of Jewish believers in their midst.

While Cragg’s discussion of Hinduism was interesting in its emphasis on a plurality of christologies and on going beyond both history and also biblical norms in order to attain what is spiritually relevant, there were also some significant gaps in his discussion. I would have liked him to define more fully what ‘oneness with ultimate Being’ may actually mean both in Hinduism and in Christianity. This lack is underlined by his restricting his Indian theological debate to such theologians as Sundar Singh, Chenchiah and Chakkarai, while failing even to mention the great Brahmabandhab Upadhyaya—but the former are more related to the bhakti school of Hinduism and therefore to the plurality question, whereas Upadhyaya is more advaitin.

In the Buddhism section Dr Cragg fastens onto the question of the self which L. DeSilva, Choan Seng Song and others have made the key area of contextualized debate and theology. What is the self which anatta denies? How does the self relate to selfishness? Can godly and loving desire be unselfish? How then can a Buddhist anatta doctrine have any bearing on the Christian desire for the good of society and neighbour? What salvation can there be if there is no self?

Cragg ends with a fascinating final chapter on some verses in 1 Timothy and the deep need for honesty in particular matters. He has a controversial but stimulating discussion on the Canon and whether Asian antecedents may enter into it. Can a Jewish and Mediterranean source-book suffice for a world theology and liturgy?

This is not an easy book. It assumes some background knowledge and its style demands concentration. It may not give the answers some of us would like, but it will stretch us and stimulate us with perceptive questions.