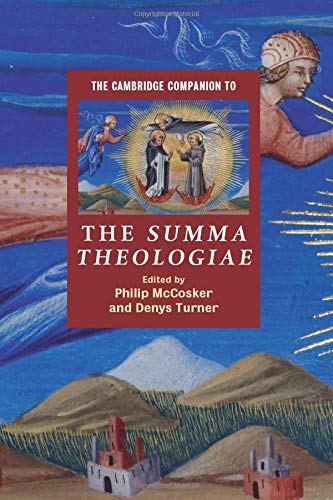 The Cambridge Companion to the Summa Theologiae

The companion includes an introduction and twenty-four chapters in three parts. The first part introduces the character of the Summa: literary features, spirituality, structure, engagement of Scripture, use of philosophy, and theological method. The second part then includes chapters which address key themes appearing in the text: God, eternity, Trinity, Holy Spirit, creation, providence, the human person, happiness, virtues, grace, the person of Christ, the life of Christ, redemption, and the sacraments. The third part looks to the reception history of the Summa, including essays on Roman Catholic traditions, Eastern Orthodox traditions, Reformed (or Protestant) traditions, and Non-Abrahamic traditions of interpreting and engaging the Summa. What might we make of the structure of the companion and of its contributors? The three-part structure serves the student well, helping contextualize its shape, clarify its claims and arguments, and dip into its ongoing streams of influence and engagement. The first part is especially well proportioned and conceptualized. The third part likewise covers the terrain well, suffering only in that it tends to merge philosophical and theological conversation within its constituent traditions in a way that appears in places to be somewhat too pacific. The second part raises more interesting questions, however, regarding the contents of the Summa. The inclusion of chapters on eternity and the life of Christ are interesting (somewhat unexpected) choices; I find the former choice odd, the latter one brilliant. This part heavily addresses the prima pars (first part of the ST), with seven chapters largely focusing on that segment of the Summa. I find this judgment to be wise as it shows the structural role played by the material there in the first segment of the text. The inclusion of four chapters on the tertia pars (third part), indeed more than ruminate on the secunda pars (second part), shows a marked change in Thomistic studies in the last half century. Whereas Thomas used to be read in a manner that minimized his Christocentric specificity (e.g. the claims of the philosopher A. M. Fairweather or the apologist Cornelius Van Til), those engaged in the study of his theology in recent decades have seen the way in which the tertia pars serves as the summit of the Summa (hindered, however, by its incompleteness). I might add that reading Thomas in this way in no way prejudges the validity of his claims materially so much as it enables a higher level discourse, wherein he is actually engaged on his own turf and in his own manner.

The chapters offer a smattering of insights. Only one seems an odd fit: a posthumous essay from Herbert McCabe, which is marked by its datedness from the 1980s and, as much as McCabe’s work remains worthy of study, which simply does not fit the collection as a whole. Most contributors are involved in an ongoing way with Thomistic study (with many senior notables included, such as David Burrell, Jean Porter, Mark Jordan, and Gilles Emery); others, such as Sarah Coakley, nonetheless bring both a familiarity with the text as well as insight from broader familiarity with the dogmatic and philosophical streams in which the ST fits. Some essays are remarkable additions (without peer in parallel volumes), such as John Marenbon’s essay on the scholastic method of the ST, which includes a matchless comparison of its question and answer format to the wider academic field of its day. Some essays distill much wider learning in a small essay, such as Fritz Bauerschmidt’s guidance regarding how to read portions of the ST, Mark Jordan’s ruminations on the structure of the ST and its purpose of moral reform, Pim Valkenberg’s concern to analyze the scriptural analysis found in the ST, Kathryn Tanner’s discussion of the relation of God and creation and of respective agency, Paul Gondreau’s patient attention to the oft-ignored portion of the third part of the ST (questions 27–59) addressing the life of Christ. Christoph Schwöbel’s essay on Thomas and the Protestant (mainly Lutheran and Reformed) traditions sketches the ways in which a more text-sensitive and exegetical approach to the ST (and Thomas’s biblical commentaries, we might add) has led past earlier Barthian (and Van Tillian, we must add) oppositions tout court to the work of the angelic doctor; he traces the conversations amongst Protestants in recent decades which have re-identified Thomas as a pre-Reformational doctor of moral and spiritual reform and a key expositor of catholic orthodoxy regarding God, creation, and Christ.

This volume will be of great interest to the graduate student and pastor interested in catching up on the latest debates regarding the theology of Thomas Aquinas and, even more important, desirous of being able to read Thomas with skill and insight. I must admit that other volumes serve as more useful introductions to the text: I think especially of Fergus Kerr’s Thomas Aquinas: A Very Short Introduction (Oxford: Oxford University Press, 2009) and F. C. Bauerschmidt’s Holy Teaching: Introducing the Summa Theologiae of St. Thomas Aquinas (Grand Rapids: Brazos, 2005). With Romanus Cessario’s A Short History of Thomism (Washington, DC: Catholic University of America Press, 2005), Thomas Weinandy, Daniel Keating, and John Yocum, ed., Aquinas on Doctrine: A Critical Introduction (London: T&T Clark, 2004) and Aquinas on Scripture: An Introduction to his Biblical Commentaries (London: T&T Clark, 2005), and Fergus Kerr’s After Aquinas: Versions of Thomism (Oxford: Blackwell, 2002), this volume will provide a useful secondary resource to getting to know Thomas’s theology in the ST and its interpretation. In that regard, it is highly commended. And, in many ways, this latest companion shows what a revival we have seen in Thomistic studies. While it focuses mostly on the text of the ST (indeed, the footnotes are primarily to references within the text itself rather than to its voluminous reception-history), it also brings to the reader a wealth of analysis distilled from many monographs and technical articles over the past 30 years into a modest sized and rather accessible textbook. Most of all, it helps equip the student or scholar today to read Thomas in a more confident and competent manner.