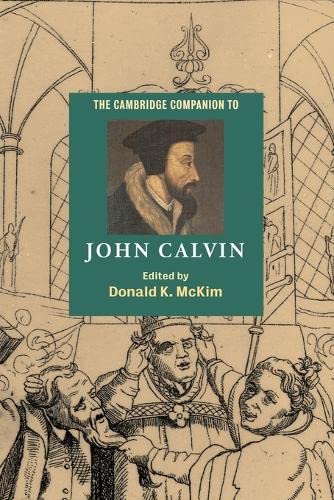 THE CAMBRIDGE COMPANION TO JOHN CALVIN

This Cambridge Companion will be a useful tool for students interested in Calvin, the Reformation and Reformed theology. The eighteen chapters, by authors most of whom will be familiar to those engaged in ‘Calvin Studies’, are grouped in four parts: Calvin’s life and context; his work; after Calvin; and Calvin today. The bibliographical apparatus is excellent. Most of the chapters take the form of summaries of the author’s own or others’ research, some contributors even being content with interacting with fairly recent secondary literature. The editorial aim, think, is to present Calvin as a ‘world figure’, which he certainly is Paradoxically, the effect of this policy is to dilute and obscure his theology, which is, after all, what made him into a world figure.

There is some unnecessary overlap among the chapters, which suggest that the editorial hand could have been slightly heavier. There are obvious gaps. There is no sustained treatment of Calvin’s sources: for instance, his massive indebtedness to Augustine, his place in the late medieval world; or of the influence of the Renaissance on him, and no study of Calvin and Luther. And the chapter ‘Calvin in Ecumenical Context’ (by Jane Dempsey Douglass) seems oddly dated. In any case, Calvin’s own ecumenical endeavours had a rather different style and agenda from those of modern ecumenical statesmen and their pars, church councils. The cumulative efforts of all this scholarly material is to dull the impact of Calvin, the man whom God mastered, and, strangely, to explain less by trying to explain more.

Only two chapters are straightforwardly theological: those by John Hesselink, ‘Calvin’s Theology’ are by Brian Gerrish, ‘The Place of Calvin’s Christian Theology’ although on ‘Calvin’s Ethics’ by Guenther Haas and on ‘Calvin on piety’ by Joel Beeke naturally enough touch on some of Calvin’s theological concerns. Hesselink’s piece is, frankly, a disappointment. It conveys little of the sense in which Calvin was gripped by the gospel of God’s free grace in Jesus Christ, but is content to note certain theological themes and emphases. This treatment is in conscious opposition to the idea that Calvin’s theology was governed by the ‘central dogma’ of predestination, or by some other central dogma. This is certainly correct. There was no central dogma. Nevertheless there was a heart to Calvin’s theology, a flame which fired him up and made him the force that he was.

Brian Gerrish’s chapter is much stronger because he concentrates on two or three themes and does not try to do too much. Gerrish is one writer who explicitly recognises Calvin’s Augustinianism and also the influence of Bernard of Clairvaux. Calvin is compared with two other influential theologians in the Reformed tradition, Schleiermacher and Barth. Gerrish clearly draws out the (rather similar) ways in which the two each re-formed Calvin’s doctrine of election. Whether such radical re-forming is legitimised by Calvin’s recognition that doctrine develops, as Gerrish appears to think, is another matter.