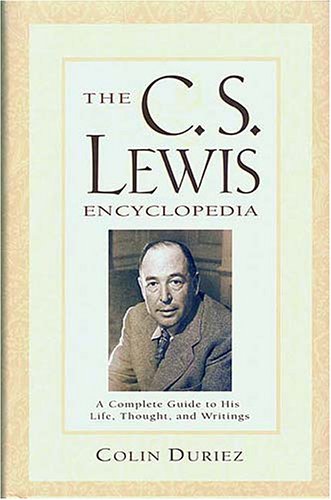 This well-filled reference book is attractively produced in typical Crossway fashion, on quality paper with care taken over layout and avoiding too cramped a look—important, when a mass of information is to be presented. It is a much more detailed and substantial follow-up to the author’s earlier C.S. Lewis Handbook,even if ‘Encyclopedia’ might seem too grand a title for a 240 page paperback. Colin Duriez justifies his title by pointing to the encyclopedic range of Lewis’s writing, which is fair enough. Intended for the reader who knows Narnia or some of Lewis’s other popular titles, or has seen Shadowlands, the book sets out to guide and inform further explorations into the diverse aspects of Lewis’s work.

Colin Duriez—who is General Books Editor at IVP, UK—is an excellent companion for such explorations. He has written extensively about Lewis (he is a contributor, for example, to the recent Reading the Classics with C.S. Lewis—Baker, 2000: UK distributor Paternoster). He has lectured on Lewis topics all over the world and shows, in a fascinating introduction, that his love of Lewis’s work has been a life-long one.

The entries in the encyclopedia range from brief amplifications of minor characters in the novels to extensive discussions of key themes such as ‘Joy’, ‘Inklings’ and ‘Paganism and mysticism in C.S. Lewis’. The book summaries, as in the earlier Handbook, are very good, and will be a helpful preparation for reading some of the more daunting books like Till We Have Faces. Sometimes a little more information would be useful, such as why and how That Hideous Strength was abridged for paperback, but on the whole the summaries are models of how these things should be done. There is a useful bibliography and a reference guide.

There are, inevitably, omissions: for example, no entry for the volume of essays Fern Seeds and Elephants (nor under its US title Modern Theology and Biblical Criticism), though other collections of essays have entries. Several of Lewis’s books—for example some works of literary criticism—do not have separate entries, which is probably the right decision given the aim of the book. On the other hand, if Walter Hooper is included surely Clyde Kilby should be in as well, especially given his role in the establishing of the Marion E. Wade Center Lewis collection at Wheaton. The book, correctly in my opinion, avoids a number of well-trodden Lewis minefields: you won’t find entries for Kathy Lindskoog or A.N. Wilson, for example, and issues such as the nature of the relationship between Lewis and Mrs Moore are sensibly and sensitively handled. On the other hand, Duriez, like Walter Hooper in his C.S. Lews: A Companion and Guide, ignores the robust criticisms made by Dame Helen Gardner of Lewis’ critical qualities; a pity, as Gardner made no secret of her warm appreciation of Lewis and so her critique is all tire more worth taking seriously, if only to refute it.

But this is a highly recommendable book, written with expertise and great enthusiasm. It will make readers aware of the range of C.S. Lewis’ work and equip them to explore it. It won’t replace Hooper’s weighty Companion and Guide, but as Colin Duriez points out in the introduction, it isn’t intended to. As an aid to exploration and discovery, it should do valuable service for readers looking for help in getting to know one of the twentieth century’s most remarkable Christians.