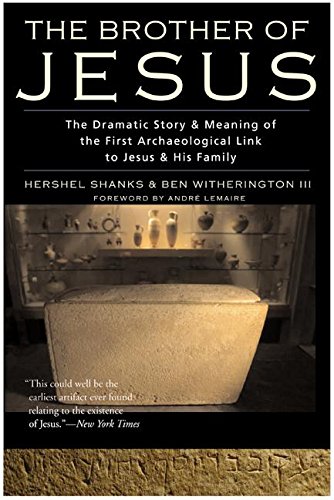 THE BROTHER OF JESUS: THE DRAMATIC STORY AND MEANING OF THE FIRST ARCHAEOLOGICAL LINK TO JESUS AND HIS FAMILY

This two-part book should appeal alike to readers who enjoy mystery and controversy, and to scholars who value a succinct account of James, a monumental early church leader in Jerusalem. It first presents a highly readable account of the discovery of an ‘ossuary’ (a bone box) bearing the Aramaic inscription, ‘James, son of Joseph, brother of Jesus’. The discovery made front page news throughout the world. The way Hershel Shanks, editor of Biblical Archaeology Review, writes this section makes it read like a detective novel. Ben Witherington III, a prominent NT scholar, follows with a detailed portrait of James. James is mentioned in the Gospels, Acts, Paul’s letters, the works of the Jewish historian Josephus, and Eusebius of Caesarea, a fourth-century church father (xii).

The book begins with a foreword by Andre Lemaire, a specialist in Semitic epigraphy. His November 2002 BAR article provides evidence arguing that the ossuary and inscription are authentic (7, xiii). The ossuary could be the earliest artefact testifying to the existence of Jesus of Nazareth.

Writing almost in a breathless fashion, something rare for biblical scholarship. Shanks takes readers through the chronology and controversy relating to this find. The ossuary, made from chalk limestone found in the Jerusalem area (19), underwent extensive scientific tests. Shanks records views for and against its authenticity. He notes that a paleographer will look at the yods (an Aramaic letter resembling an apostrophe). Lemaire found that the ossuary’s four slightly slanted yods were in cursive script, helping him to date it to before AD 70 (35). However, notes Shanks (35), for Kyle McCarter, another scholar, the cursive from suggested a later date.

Looking at James’ legacy, Witherington notes that he is called the brother of the Lord by Paul, is always associated with Mary in the Gospels, and is listed first among the brothers and sisters of Jesus (108). Throughout the book, Shanks and Witherington treat James as the brother and not the cousin of Jesus Jesus’ appearance to James after the crucifixion (Acts 1:14) seems to have led to his conversion and later to his rise to prominence as a leader of the church (109).

Perhaps the book’s most significant part is Witherington’s chapter on James the Sage that compares the Book of James with Jesus’ teachings in the Gospels and the writings of Paul. James’ advice parallels his brother’s teachings’, Witherington concludes (152). The Book of James emphasizes how members of a community should relate to each other, such as not slandering or grumbling about one another (Jas 4:11; 5:9). Witherington says that the Book of James does not reflect the Pauline emphasis on Jesus’ death and resurrection but does mirror the more ethical sections of the Pauline epistles. Consequently, comparisons between the writings of Paul and James should be made in their ethical sections and not their theological sections (161–62).

Witherington and Shanks have produced a very interesting book, prompted by an archaeological find that ignited worldwide interest. The two are convinced by the reports of today’s best experts of the ossuary’s authenticity. Witherington concludes that at the heart of the mystery of who is James, son of Joseph, brother of Jesus, is also the mystery of who is Jesus. Witherington rightly says that to learn more about James may be one key to a better understanding of Jesus (222). For that reasons alone. The Brother of Jesus contains great merit.