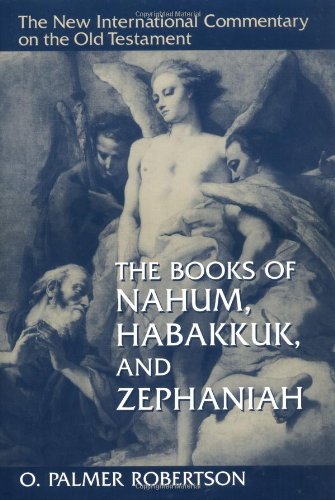 The Books of Nahum, Habakkuk and Zephaniah (NICOT)

In the longest section of his introduction, Robertson places the prophets in their historical context, giving a brief overview of the period from Hezekiah to the fall of Jerusalem (715–587 bc). In another section, he suggests when the prophecies themselves were written (Nahum, 650–622 bc; Habakkuk, 608–605 bc; Zephaniah, 622–612 bc). Two aspects of theology are touched upon, namely the nature of God and the Messiah, or his absence, in the prophecies. Robertson suggests that the absence of evidence for the Messiah in these books arose from a lack of confidence in the Davidic line. This necessitated reverting to a pre-Davidic ideal, that of God himself acting on behalf of his people, rather than a human emissary. Brief sections on literary, textual, canonical and structural matters are followed by a ‘select bibliography’ containing 48 ‘general works’ and 64 on the three prophetic texts themselves. The body of the commentary covers one-to eight-verse portions of text, with comment on literary, historical and theological points. The book concludes with indexes of subjects, authors, Scripture references and Hebrew words with English translations.

The author provides detailed studies of the theological cruces of the jealousy of God in Nahum 1:2–3 and ‘the just’ in Habakkuk 2:4–5. These and similar discussions are useful material for both pastor and theological student. These two discussions also illustrate why the volume must be used with care.

In discussing Nahum 1:2, Robertson refers to two Exodus passages as possible sources of a quotation in Nahum. He does not indicate that the Nahum passage has a different Hebrew form of the root word found in Exodus (also in Dt. 4:24; 5:9; 6:15). Moreover, the only thing in common between the various verses is the description of God as ‘jealous’, the words for the concept not being exact parallels nor sufficiently justifying a claim that Nahum is quoting the other passages.

An even more worrying point involves the translation of Habakkuk 2:4 as ‘… but the justified—by his steadfast trust shall he live’. This rendering as a passive participle is unique among the major translations, and is theologically difficult, both within the context of the passage itself as well as more generally. The contrast in the context is between those who are actively sinful and those who are ‘just’ or ‘righteous’ in their attitudes and actions. It is not a contrast between an active evil agent on the one hand, and one who passively receives justification on the other. Robertson’s translation seems to push the sovereignty of God much further than this verse is able to bear.

Robertson lacks interaction with other interpreters. Only 40 per cent of his bibliography comes from the last 25 years, and only two were published in the last decade. I did not find any discussion of either of these most recent contributions within the commentary itself. Part of the problem of dated references lies at the door of the publisher. A delay of four years between manuscript submission (1986) and publication (1990) is unconscionable, both in light of the technology available for publication, and also due to the constant deluge of material appearing on any topic. Such a delay makes any book out of date even before it is on the market.

The onus is not completely on the publisher, however, since Robertson seems to have a predilection for older works. For example, on pages 262–263 he cites Edwards (18th century), Keil (19th century), Driver (early-20th century) and Rudolph, with even the most recent of these admittedly useful works being over 20 years old. This is also true with regard to some reference works, since he uses the original edition of Koehler and Baumgartner’s Hebrew lexicon (1958) instead of the much more recent third edition which, while incomplete at the time of Robertson’s research, was at least half completed and available to him.

The author uses an almost ‘pre-critical’ approach in some places. For example, the introductory reconstruction of Israel’s history, while using primary Ancient Near Eastern sources to elucidate proposals, does little to present alternative interpretations to the commentator’s own.

The book’s intended audience is unclear. Pastors and teachers are explicitly mentioned as intended readers, but often at least a good memory for previously learned material is needed since the work assumes a fair amount. In discussing the shape of the prophecies, including matters of style and structure, specifically parallelism, there is virtually no discussion of the latter element apart from an acknowledgment of its existence. At times, but with no consistency, Robertson indicates in his translation, and sometimes in his discussion, such conventions as a-b-b-a, but he does not explain what the letters indicate, nor their significance in any particular combination in the text.

More sophistication than the average reader of the series might possess, or at least knowledge beyond the ordinary universe of discourse of this reviewer, is also presupposed elsewhere. For example, I am not sure whether the jealousy of God in Nahum 1:2 receives much clarification when it is explained in reference to ‘deifying a platonic realm of ideas’ or ‘embracing a Kantian distinction between … the phenomenal and … the noumenal’.

Literary issues, which can spark interest in the text by showing its vibrancy and impact, too often receive short shrift, or are missed altogether. The key word ‘sacrifice’ which unites Zephaniah 1:4–7 and 8–14a is not discussed in light of this unifying function, even though textual unity is important to the commentator. Also, the translation of Zephaniah 1:12 as concerning those who ‘settle on their haunches’ not only departs from the regular understanding of the last word, but also misses a powerful Israelite metaphor for nonproductive apathy.

The commentary contains useful insights, especially in seeing the NT development of some ideas raised in the prophets. There are also useful applications to the contemporary scene beneficial for the pastor. As will be apparent from the points raised, however, the commentary must be used with caution. While it should be referred to in interpreting these three prophets, it is not my recommendation for the first or the only commentary on these books in one’s library.