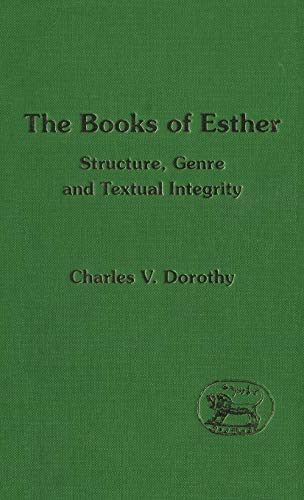 The Books of Esther

Charles Dorothy has given himself two tasks: a microstructural analysis of Esther, and a source critical history of the books of Esther.

Microstructural analysis is a new way of studying the text in its final edition. It examines the small grammatical markers such as ‘and’, ‘after this’, sentence endings and tense changes. This method is useful for finding either the subconscious structure of the original author or the fine-tuned structure of the final editor.

The microstructural analysis is an especially valuable part of this book, because there are very few published attempts at such analysis at present. I know of only two other published works so far: Ekkehardt Müller, Microstructural analysis of Revelation 4–1 (Berrien Springs, Andrews UP, 1994): and Daniel Hojoon Ryou, Zephaniah’s oracles against the nations: a synchronic and diachronic study of Zephaniah 2:1–3:8(Leiden, Brill, 1995). Others are working on similar projects, but this is a very young discipline.

The source criticism of Esther is an equally valuable task. The title of the book indicates the extreme problems involved in the source criticism of Esther. We have four versions of Esther: Hebrew Esther (EH), Esther in the Septuagint (which Dorothy calls o’, the Greek siglum for 70), Esther in the Lucianic LXX (L) and Josephus’ version. Dorothy does not state exactly what he means by the LXX in distinction to L, but he appears to depend on Hanhart’s work in the Göttingen Septuagint.

Dorothy argues that the Lucianic text cannot be attributed to Lucian, and that it preserves very old readings, including some from the pre-LXX Old Greek. He argues that each of these sources must be taken seriously, and we should not continue to speak of the Greek ‘additions’ to Esther, which is how the Greek versions are presented in the Apocrypha. He concludes that the different versions of Esther are collections of ‘different traditional elements which existed within a larger matrix, probably comprised by several communities’ (296). These elements were collected from a ‘narrative pool’. The earliest material is probably the Semitic Urtext which existed in two forms which were translated into Greek in the Lucianic text and the LXX.

He convincingly suggests that the text of Esther was structured on an Egyptian form called a Royal Novella. He traces several stages of development, from the merging of an ‘Esther’ source and a ‘Mordecai’ source to form the Royal Novella, followed by various stages of editing, culminating in the addition of 9:1–19. This addition, which took place in various stages, was used to make the story into an origin for the Feast of Purim. This addition can be dated to the period of Jewish independence in 164–68 BCE, but it is difficult to date the earlier stages.

The two tasks in this book, the microstructural analysis and the source criticism, do not sit comfortably next to each other. It is difficult to know how microstructural analysis could be used for source criticism, except perhaps by comparing two styles of final editing (which he does not do). The two tasks are both useful in themselves, and they are both significant contributions to the study of Esther, but they are really two separate endeavours.