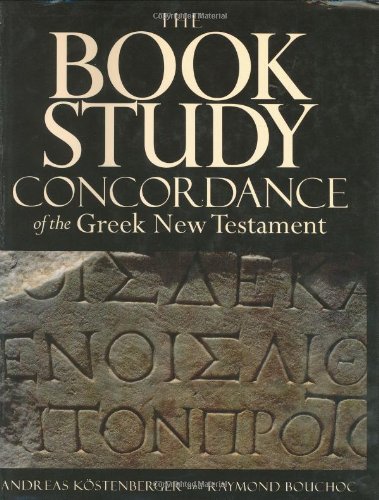 THE BOOK STUDY CONCORDANCE OF THE GREEK NEW TESTAMENT

This concordance, based on the 27th edition of the Nestle-Aland Greek text, has appeared not long after the publication of the revised edition of Moulton and Geden’s Greek concordance, and so immediately invites comparison. In fact it does a quite distinct job in that it provides references to occurrences of Greek words within particular NT documents, and the editors regard it as complementary to existing works rather than a replacement for them.

The book is structured as follows: A distinct section is devoted to each NT document and each section follows the same format. First there are statistics: total word count for the document; number of words occurring at least 10 times; number of words occurring once; a full list of all words whose occurrence in the document in question account for at least 25% of the occurrences in the entire NT. Second, there is the concordance proper in which each occurrences of the selected words is listed in its immediate context (usually 3–8 Greek words). Finally, there are frequency lists, which include every word found in the document, in alphabetical order and also in order of frequency of occurrence.

Whenever a Greek word is listed (except in the cases of the frequency lists), it is accompanied by a transliteration, a statistic indicating the number of occurrences in the document in question compared to the number of occurrences in the entire NT (e.g. 1/1 or 19/90) and an English translation. The editors take pains to point out, however, that the English gloss is only for convenience and that each word should be examined in its context with reference to the standard reference tools such as BDAG.

This is clearly a tool primarily for those who have some reasonable facility with Greek. Although the information could be found using computer software, it is helpful to have so much analysis already done and some of us simply still like paper! For such people, this is a helpful tool.

Greek terms are normally transliterated and translated for ease of use.