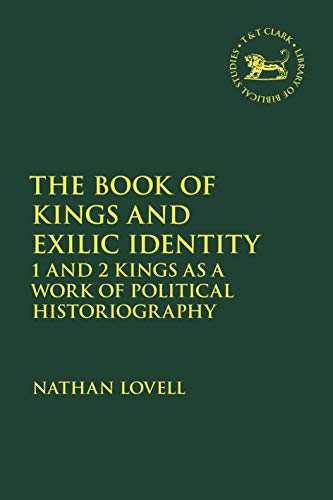 The Book of Kings and Exilic Identity: 1 and 2 Kings as a Work of Political Historiography

Is the book of Kings a mish-mash of inconsistent accounts of incidents in Israel’s monarchy? Why have scholars ended up with widely divergent views on what the author of Kings was endeavouring to do? How does Kings relate to the rest of the Primary (or Deuteronomistic) History?

In this work, which began life as a PhD thesis, Lovell sets out to address these questions and to demonstrate that Kings is a finely crafted piece of history writing that serves a political agenda. While we are offered insightful readings of key episodes, Lovell’s focus is on the big picture.

Though Lovell makes appropriate use of intertextual connections with other parts of Israel’s history, particularly Joshua, his treatment of Kings predominantly as a book in its own right (as distinct from a segment of a larger historiographic project) is welcome. Lovell sees two mutually interpretive sections, Inner Kings (1 Kgs 16:23–2 Kgs 15:38 with its account of the Omride dynasty and the prophetic ministries of Elijah and Elisha), and Outer Kings dealing with the account of the two kingdoms in relation to YHWH’s promise to David. This intercalation, or sandwich structure, is evidenced in the prophecy–fulfilment accounts that begin and end in the outer layer, or are contained within the inner layer, but do not cross the boundary between them.

Lovell’s main idea, that Kings is a work of political historiography, is not new. Many have seen it as a rationale for the debacle of the demise of the states of Israel and, more particularly, the Davidic kingdom of Judah. Others see elements of hope beyond exile. Lovell’s approach is that, in a sense, the book is designed to create the nation which in exile is bereft of a national identity, furnishing the deportees with a sense of who they are, their continuity with the past, the land and its institutions, and providing hope for the future in the face of the absence of the key symbols of nationhood. They are to aspire to the ideal of Covenant-Israel.

Lovell’s method is primarily that of final-form literary criticism (with juxtaposition as a key feature), with some attention to redaction criticism, though he is rightly skeptical about reconstructing layers of redaction with discernible ideological tensions among them. Lovell supports the traditional view that the exile is the most feasible context against which to read the book (with use of earlier source material). The author addresses a people deprived of land, cult, and monarchy, and (from longer ago) of the unity that should constitute “Israel.” There is a helpful section on the theme of the centralization of worship in which we are reminded that the problem addressed in Kings is apostasy, not decentralization per se. The exiles can be encouraged that, while not ideal, non-Jerusalem altars can be legitimate (as Elijah’s on Carmel).

The categories of the covenant, the name Israel, the land, and rule provide the elements for building a sense of who the nation is. There is a dialectic between the Mosaic covenant and the David promises that grapples with the seemingly both conditional and unconditional nature of God’s commitment to this people. How is Israel to be defined in relation to the post-Solomon schism? Are they one nation or two? And when God is observed operating outside of the land at various stages, can this provide hope for the situation the exiles find themselves in? Lovell’s answer is a decided “Yes.” The exile is restorative, and, by the narrative shaping, Israel should expect YHWH to raise up a deliverer.

Since the writer of Kings pays so much attention to the reign of Solomon at the outset, these first eleven chapters are considered key to his agenda. Lovell rightly, in my view, sees the indications from the beginning that, despite all that he had going for him, Solomon is a flawed king in the one area that matters, and that this does not bode well for the nation. He out-Egypts Egypt in many respects, not a promising scenario for the king whose temple construction is given as the culmination of the exodus (1 Kgs 6:1). It is his lack of covenant faithfulness, rather than his wealth or international prestige, that will be his lasting legacy, for a trajectory to exile is established with the warnings of 1 Kings 9:6–9.

Conflicts, particularly between king and prophet like that of Elijah’s conflict with Ahab which looms large in the inner core, serve to differentiate competing visions of who Israel is. Likewise, the various responses to the Assyrian threat should serve as studies in the results of different stances with regard to foreign powers. Should exilic Israel come to an accommodation with international agendas, or seek to return to uncompromising covenant faithfulness? Covenant-Israel, as Lovell portrays it, is not only an ideal, but a destiny (p. 114). While the outline of an argument is present, I could have wished for more substantiation on this latter point.

In keeping with the series, the work is well written and edited, substantially free of errors, though a few kings have their names slightly garbled (a pity when we need all the help we can get in sorting these kings out!): Je(ho)ash for J(eh)oash (pp. 55, 207, 208), Je(ho)ram for J(eh)oram (p. 63), and Jeroabom for Jeroboam (p. 122). A number of diagrams and tables help the reader navigate the structures Lovell is suggesting.

Lovell has done a superb job of showing us how to read Kings against its exilic setting. This is a worthy contribution to Kings scholarship, one that should be read by all who wish seriously to grapple with its message.