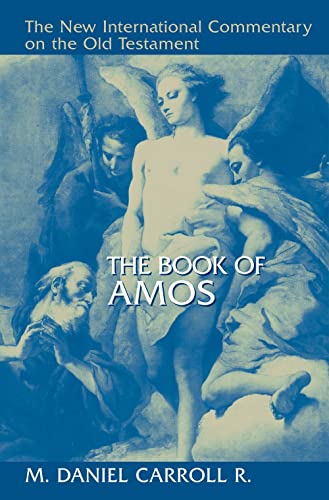 The Book of Amos

Daniel Carroll R. has produced a wonderful commentary for engaging the many scholarly questions that surround the book of Amos—and often issues more general to the life and world of ancient Israel. Amos has not been overly blessed by the commentaries, especially ones that are both academically astute and from a broadly conservative/evangelical standpoint. And this book will be a first point of reference for students and scholars entering into the debates or needing help in particulars of a complex and engaging (if neglected) corner of our Bibles.

Carroll R. situations the various oracles in Amos to roughly the first half of the 8th century BC (the era pointed to by the text itself). He presses against the impulse of critical scholars to pronounce numerous layers and grounds and ideologies around layers of redaction, rightly pointing out the paucity of evidence on which such work is carried out regarding Amos (as, we might add, most of the prophetic literature). But the character of the discussion in these matters is nothing like such dogmatic assertions. The author, in standard academic prose, offers a patient walk through various sides of the question. He names the issue, walks through proposed options and problems with these proposed solutions, then offers either a synthesis or defense of his own solution.

The outcome is a thoughtful, thoroughly engaged scholarly work that ought to be the first stop of reference for students beginning academic study of the prophets. The volume continues the impressive recent additions to the NICOT series, which has always been focused on the academic student and ensuring conversational fluency with the relevant critical scholarship. The result here is certainly thorough—he opens with 112 pages of introduction, and only gets through two verses before entering his first lengthy excursus. And while it’s true that the scholarly literature is largely of the same sort—classical critical scholarship, rather than any engagement with the plethora of other more recent reading practices (whether feminist, from the social science fields, or theological), or figures from the history of interpretation—that also fits the basic history of the series. The classical critical field covered so well in this volume remains the backbone on which all kinds of readings are pursued in academic work.

For all that, however, I must admit that I finally completed the volume with some disappointment. Not with regard to the academic engagement or the judgments made—naturally, there are moments where I disagreed or thought a different option would help—but rather with the somewhat tiring effort it takes to engage.

Nowhere else in Scripture are we faced with rhetorical pugilism of the sort we find in a book like Amos. It is a lively book, sparkling with fight and force, leaving readers with the sense that this particular prophet believed that everything was on the line when the people of God are confronted with their unfaithfulness. To move from the text to the commentary feels like someone throwing on the handbrake from 60 mph. We almost get the idea that being confronted with the prophets is a take-it-or-leave-it affair, one that is rightly handled in the impersonal voicing of professional academia.

I say “almost” because I know from Carroll R.’s other works and his teaching that this would be a deeply unfair conclusion to the scholar or his desire in his work. In fact, in the commentary there are moments when the passion (rightful, in my view) shunts the impersonal voice to the side. Take this striking aside from the introduction, speaking of the urgency in Amos’s words: “Those who live or have lived in the Two-Thirds (or Majority) World can readily identify with these kinds of images and the intent of the dramatic language: The harsh reality of poverty and the multiple abuses by economic and government elites produce shock and anger” (p. 25).

His sensitivity—born from experience—to a world not often entertained in classical critical library-writing, occasionally felt as if it was bursting to emerge. Yet we only get passing references to it. Later, he rebukes one older commentator who famously wished the prophet to address the sins of the “lower stratum of society,” with precisely the steel and passion I was hoping to see more often: “This commentator misses the depth of righteous anger. The sight of widespread suffering while elites coldly enjoy the comforts obtained on the back of others’ misery triggers the outcry. This does not mean that the oppressed are idealized” (p. 377).

And while it is not the author’s fault that the work was released on the heels of such upheaval as we have seen in the last years, the above quote sounds particularly poignant in a post-George Floyd culture. Think again of that dynamic in our current moment: one critic minimizes Amos because the prophet fails to expose and rebuke the wrongs committed by the oppressed. And Carroll R. responds by focusing attention on the real experience of those suffering under the oppressive hand of those who built their social position on the back of others’ misery. It sounds eerily poignant for good reason. Yet we have almost to scour the lengthy work for these moments.

To name the personal disappointment, I have a longing for the prophets to be preached again, especially in majority-white churches. The last year, especially here in Minneapolis, has only solidified that need, so that discussions of “systems of oppression” can be engaged in biblically and theologically faithful ways. Amos was not a Marxist nor the son of a Marxist. Yet I don’t know of a more poignant voice than Amos for confronting the reality of often-oppressive systems where those in power are afraid of losing that power to those on whose backs they have built their wealth. One need not idealize the oppressed to expose oppression.

I hope many preachers will want to engage the questions of social injustice in the context of divine justice, and when they do, they should turn their own thoughts and those of their congregations to Amos. They will want Carroll R.’s work next to them as they begin that work, because there is not another commentary so thorough in its discussions of a complex and sometimes confusing book. But the commentary reads more with an assumption that it will live on library shelves for student use, rather than impelling a new generation of preachers towards hearing the prophetic voice of God through Amos in the midst of such a chaotic cultural moment.

Of course, this should not cloud either the excellence of the work for what it is, or appropriate admiration for the author. In fact, the disappointment comes as a function of my regard for the author: his works on immigration, race, and the importance of non-majority world voices all led me to expect this commentary to be a magisterial dialogue between Amos and the realities faced by the preacher in trying to shepherd people faithfully in our world. What I received instead was an excellent conversation between Carroll R. and the traditional literature of academic prophetic studies, with the text of Amos as the topic du jour. For what it is, it is immensely helpful, and students will be in his debt for a generation. Yet I fear it will not prove the help I was expecting for pastors and preachers who want the church to hear the prophetic voice of Amos in today’s fraught moment.