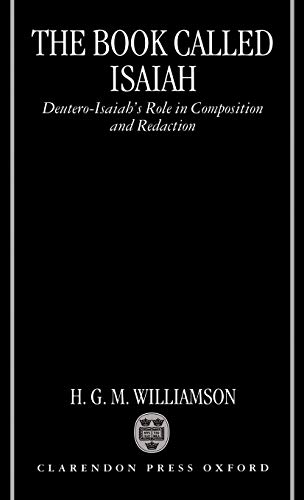 The Book Called Isaiah. Deutero-Isaiah’s Role in Composition and Redaction

Williamson argues his thesis that the corpus of literature composed by Isaiah of Jerusalem, and found in the first 33 chapters of the book, had a profound influence upon the author of Isaiah 40–55, i.e. Deutero-Isaiah. He studies this influence in terms of the ways in which the vocabulary and ideas of various sections of Isaiah of Jerusalem, especially chapter 6, are developed in Deutero-Isaiah. For example, the description of Israel as blind and deaf (6:9–10) is reversed in Deutero-Isaiah. Again, the terms for ‘former’ and latter’ in 9:1 (Heb. 8:23) recur in numerous passages in which God describes himself as the first and the last and as possessing knowledge of the former and latter things. Williamson takes special interest in references to Isaiah’s document which he is to write and seal for a future time (8:1–4, 16–18; 30:8–9). Williamson believes that Deutero-Isaiah understood this as Isaiah’s own writings which his eighth-century generation did not hear because of their sin. However, Deutero-Isaiah saw the fulfilment of this in the return from the exile, which he describes. Thus the concern of Deutero-Isaiah was to edit the work of Isaiah of Jerusalem so as to highlight key themes of the earlier prophet’s message and their continuity and development in Isaiah 40–55. Williamson devotes the second half of his book to an identification of Deutero-Isaiah’s redaction seams in chapters 1–39 of the book. Isaiah 36–39 is not original to Isaiah but adapted from the account of Kings and designed to provide a bridge to the period of Deutero-Isaiah. Additions such as Hezekiah’s prayer in 38:19–20 transform Hezekiah’s personal experience to one in which the exilic community returns to worship at the temple of Jerusalem. An appendix provides detailed textual notes on controversial matters found in specific texts referred to in the book.

Williamson has made a significant contribution to critical study of Isaiah. His analysis of numerous scholars and their views on the book is a contribution. His own theory in some ways combines the best of recent literary studies that emphasize themes that unite the book and traditional historical-critical approaches. It is the nature of his thesis that, even for those who do not accept Williamson’s critical assumption, his research provides valuable connections and thematic analyses of the prophet. If the author who wrote much of the second half of the book also edited the first half with the same purpose in mind, the result in many (though not all) cases is similar to a single author for the whole book. Williamson should also be commended for his honesty in admitting his presuppositions at the beginning of the book, in dealing seriously with opponents of multiple authorship at the same place in his book, and throughout confessing the hypothetical nature of much of his work. The nature of this literary evidence is that it deals in probabilities. Of course, this is the weakest part of the thesis, for, as it stresses its case, it tends to overlook explanations of assumed later texts within an earlier historical context. For example, is the concept of a holy seed in 6:13 limited only to Ezra (and thus requiring a date from Ezra’s time for this passage in Isaiah)? Does it not also occur in Psalm 89:35–36, almost certainly earlier than Ezra? Again, why must 38:19–20 refer to the return of the exiles and their worship in Jerusalem? It is nowhere explicit. Nevertheless, these observations should not obscure the importance of this work for both critical and literary studies on Isaiah.