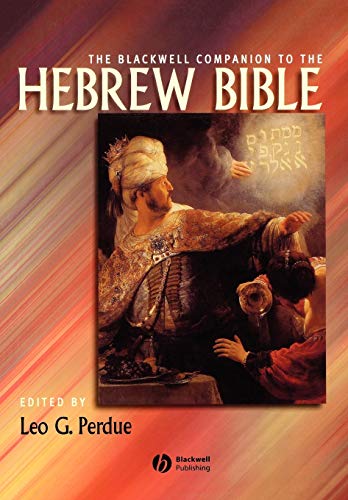 THE BLACKWELL COMPANION TO THE HEBREW BIBLE

This is the third in the Blackwell Companion to Religion Series. The volume is designed to give readers—undergraduates, scholars and interested general readers—a broad overview and survey of OT study. A collection of 26 essays, many by well-known figures in OT scholarship, been compiled. The essays are grouped into the eight constituent parts of the Volume, namely, The Hebrew Bible in Modern Study, Israelite and Early Jewish History, Archaeology of Ancient Israel and Early Judaism, The Religious and Social World of Ancient Israel and Early Judaism, Old Testament Theology, The Torah, The Prophets, The Writings. Clearly the scope of the volume is wide. There is a helpful introductory preface, The Hebrew Bible in Current Research, by the editor, which is meant to be an ‘editorial overview of the discipline, providing the reader with a guide to the interconnections between the subjects addressed in individual articles’. The editor alerts the reader to the fact that the essays represent differences in methodology, from older and more established historical critical methods to newer ones, such as feminist readings. The difference of methodology and conclusions is very evident both in the preface and in individual essays.

In one way or another, issues of historicity and the way texts are read surface in the volume time and again. Thus for example, Robert Carroll in his essay, Exile, Restoration, and Colony: Judah in the Persian Empire, argues for reading the exile and return as ‘a biblical myth’, ‘there need not have been an exile as understood by the biblical writers because that representation may be more myth than history and more ideology than reality’.

These issues are given sharp focus in the area of the interaction of OT Studies with Archaeology and especially in connection with the current debate raging around ‘When was Israel?’, which is well represented in the volume. Indeed, William Dever, perhaps the doyen of ‘Biblical’ Archaeology, is given three bites at the cherry, with three essays, something not accorded to any other contributor! Some may feel that this is a weakness. Dever’s first contribution deals with the general enterprise of dealing with the History of Israel. Dever’s second essay is a different sort of contribution, a ‘state-of-the-art assessment [of Syro-Palestinian archaeology], covering the period of ca. 1975–2000’. As such, amongst other things, it helpfully points the biblical scholar to useful handbooks and journals. (This guide to literature in a particular field is a feature of the essays of other contributors also.) This is far from being a dispassionate treatment, engaging as it does in part with the challenge of ‘revisionism’. Rather curiously, though reference is made to Whitelam, he is not listed in the Bibliography to this essay, however, his volume The Invention of Ancient Israel is listed in Dever’s other two essays.

Inevitably in a volume of this sort, there is a certain amount of overlap between contributions, though this is not a bad thing in that it enables the reader to see what different authors do in handling material.

The volume will undoubtedly be a useful reference work, albeit an expensive one for a student budget, enabling undergraduate students in particular to orientate themselves when embarking on OT studies.

The editor’s closing comments to his preface sum up the contents well, ‘Scholarship is no longer experiencing unanimity in ways of studying the Bible.’ Indeed readers may come away with a sense of excitement at the horizons opening up for possible investigation, especially as some of the contributors deliberately choose to highlight these. However, as the editor also concludes, ‘the varieties of approaches at work in these essays indicate that the interpretation of the Hebrew Bible is witnessing major transition’. Method is everything!